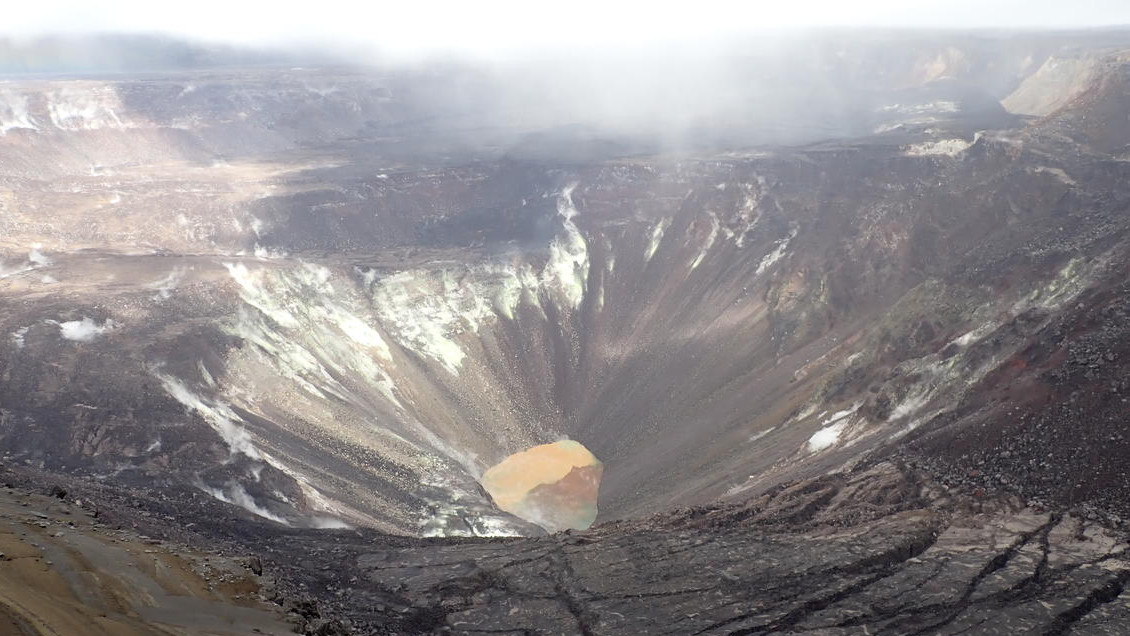 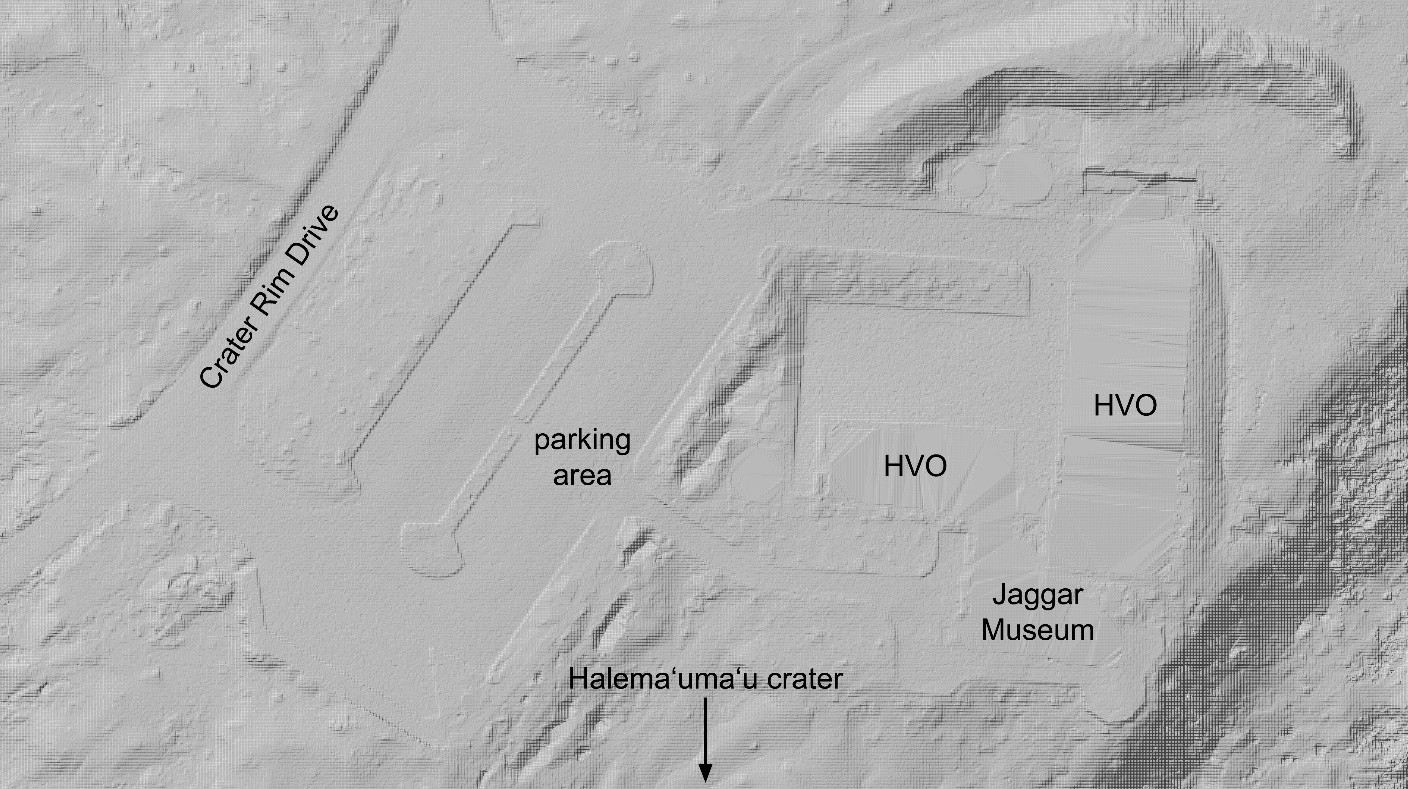 USGS: “A sample of the digital elevation model from the 2019 LiDAR survey of Kīlauea, showing the vicinity of the former HVO office and Jaggar Museum in Hawaiʻi Volcanoes National Park. The buildings have been digitally “flattened” because the instrument’s light pulses are not able to penetrate structures; this flattening approximates the “bare earth” ground surface below the buildings. Otherwise, LiDAR data captures minute details, such as the elevated curbs in the parking area.”

In cartography and geographic analyses related to volcanoes, especially in Hawaii, there is perhaps nothing more important than having an accurate digital model of topography. Such models depict the three-dimensional nature of the land, elucidating features from past eruptions and influencing potential pathways of future activity. But how are these models created?

Modeling topography on active volcanoes is unlike in any other setting, because dramatic changes can occur on timescales far shorter than a human lifetime. For example, in 2018 at Kīlauea, approximately 1 cubic kilometer of rock volume (0.25 cubic miles) was lost at the volcano’s summit and deposited on the lower East Rift Zone. So, topographic models can become outdated relatively quickly, and we need to update them accordingly.

Due to the vastness of the areas to be modeled, measuring elevations on the ground using Global Positioning Systems (GPS) is not feasible, except as a verification of other measurement techniques. Therefore, remote sensing—the measurement of ground features from the air—is preferred.

For many decades, aerial photography was the preferred remote sensing technique that the USGS employed in modeling topography. Overlapping aerial photos taken from slightly different positions along a flight line can be viewed to make the observer think they are seeing a three-dimensional scene rather than a couple two-dimensional images, similar to how the two human eyes sense depth. Using a large and complicated instrument called a stereoplotter, a user could draw outlines of lava flows and lines of equal elevation, or contour lines, on such a projected scene.

Aerial photography began to fall out of favor near the end of the 20th century as new technologies emerged to replace it. As such, the last aerial photography surveys to cover the entire Island of Hawaiʻi were completed in the early 1980s. Years later, the data were compiled into a digital elevation model (DEM) of the island at 10-meter (yard) resolution, which is still being used today.

However, Kīlauea does not always cooperate with geographers’ desire to maintain current topographic data. When the Puʻu ʻŌʻō eruption started on 3 January 1983, it marked the onset of 35 years of near-continuous topographic changes at Kīlauea that reached a climax in 2018. Some reasonably successful remote sensing occurred during this time, most notably a National Oceanic and Atmospheric Administration (NOAA) survey in 2005, but with an ongoing eruption it is inevitable that some of the data will be instantly rendered obsolete.

In the months that followed the 2018 eruption, it became clear that the pause in eruptive activity might be an opportunity to finally update the topography for Kīlauea. Accordingly, a LiDAR survey was planned and completed in July 2019. LiDAR stands for “light detection and ranging”—a laser pulsing instrument was flown over the landscape on a helicopter, with a sensor measuring the return times for each light pulse depending on the distance from instrument to target.

The raw data set that results from a LiDAR survey is a “point cloud.” All objects that reflected a light wave are depicted, including vegetation, structures, and the ground. The “first returns” in forested areas often depict the tree canopy, and sometimes these data are useful to environmental scientists, but geologists are most interested in the last or “bare earth” returns.

To make a useful DEM from the point cloud, a filter is applied to exclude all but the bare earth points, then elevation values are calculated from the points for each cell in a grid—most often by averaging. The DEM from the 2019 Kīlauea LiDAR has 1-meter (3.28-foot) grid cells with calculated elevations that should be accurate to approximately 10 centimeters (4 inches). The data were verified by comparing with GPS ground control points surveyed in spring 2019.

With a reliable topographic model for Kīlauea now available, the USGS Hawaiian Volcano Observatory can merge this data with existing models that still reliably depict other areas to make a new three-dimensional model for all of the Island of Hawaiʻi. The dataset is being used by Hawaiʻi Volcanoes National Park and the County of Hawai‘i; it will be incorporated into various maps, and enable more accurate projections of lava flow directions from future eruptions.

This data set will be up-to-date until the moment lava starts erupting once more, then the whole process will likely repeat itself. Hawaiian volcanoes have a way of keeping both geologists and geographers on their toes!