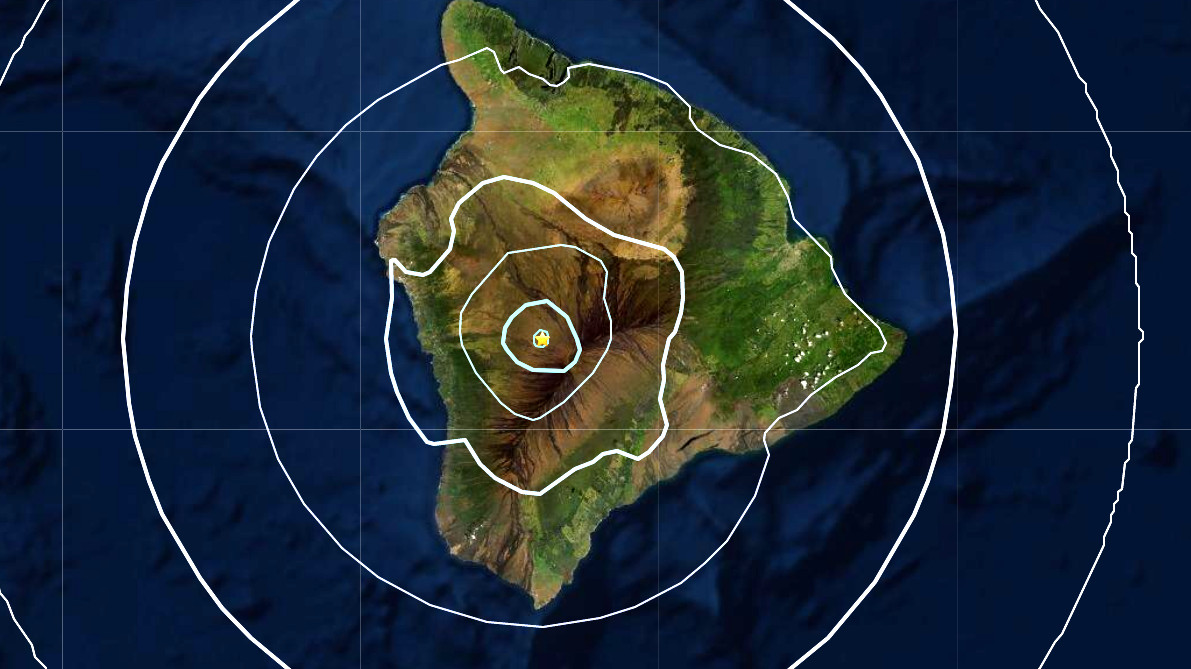 from interactive map by the USGS

HAWAIʻI ISLAND - The earthquake was initially measured at a Magnitude 3.9, and then revised upward after a review.

(BIVN) – An earthquake that shook West Hawaiʻi on Friday morning was centered below the northwest flank of Mauna Loa.

7:44 a.m. HST, a Magnitude 4.1 earthquake occurred about 2.9 miles under the Hawaiʻi island volcano.

UPDATE – (8:44 a.m. HST) – The Pacific Tsunami Warning Center said the earthquake did not generate a tsunami. “However… some areas may have experienced shaking,” the center stated.

The Hawaiʻi County Civil Defense followed with an alert message, saying the earthquake was not large enough to cause a tsunami for the island. “As in all earthquakes, be aware of the possibility of after-shocks,” the emergency officials said. “If the earthquake was strongly felt in your area, precautionary checks should be made for any damages; especially to utility connections of Gas, Water, and Electricity.”

The earthquake was centered about 22 km (14 miles) east-northeast of Hōnaunau-Nāpōʻopoʻo, at approximately 5 km (3 miles) below sea level. A map showing its location is posted on the HVO website. More details are available at the National Earthquake Information Center website.

Light shaking, with maximum Intensity of IV, has been reported across the Island of Hawai‘i. At that intensity, damage to buildings or structures is not expected. The USGS “Did you feel it?” service received over 130 felt reports within the first hour of the earthquake.

According to HVO acting Scientist-in-Charge David Phillips, the earthquake had no apparent effect on Kīlauea or Mauna Loa volcanoes. “We do not currently observe any changes in activity at Kīlauea or Mauna Loa as a result of this earthquake. Please be aware that aftershocks are possible and may be felt. HVO continues to monitor Kīlauea and other Hawaiian volcanoes for any changes.”

Today’s earthquake does not represent a significant departure from the seismic activity rate for the past year, so the Volcano Alert Level for Mauna Loa will remain at Advisory. Other Mauna Loa monitoring data streams show no significant change in deformation rates or patterns that would indicate increased volcanic hazard at this time. The earthquake this morning occurred in a location that has exhibited seismicity over the past several years. Earthquakes in this location, approximately 5 km (3 miles) northwest of Mauna Loa summit, are generally less than 8 km (5 miles) below the surface and smaller than magnitude-2.

The event follows an uptick in seismic activity observed at the summit of Kīlauea volcano. The USGS Hawaiian Volcano Observatory issued an information statement on the Kīlauea activity on Thursday evening.

Just one minute before this morning’s Mauna Loa earthquake, a temblor under the upper East Rift Zone of Kīlauea was measured at a Magnitude 3.9, but later revised down to a Magnitude 1.5.

Mauna Loa Volcano is not erupting. Rates of deformation and seismicity have not changed significantly over the past week and remain above long-term background levels. The alert level for the volcano remains at ADVISORY / YELLOW.