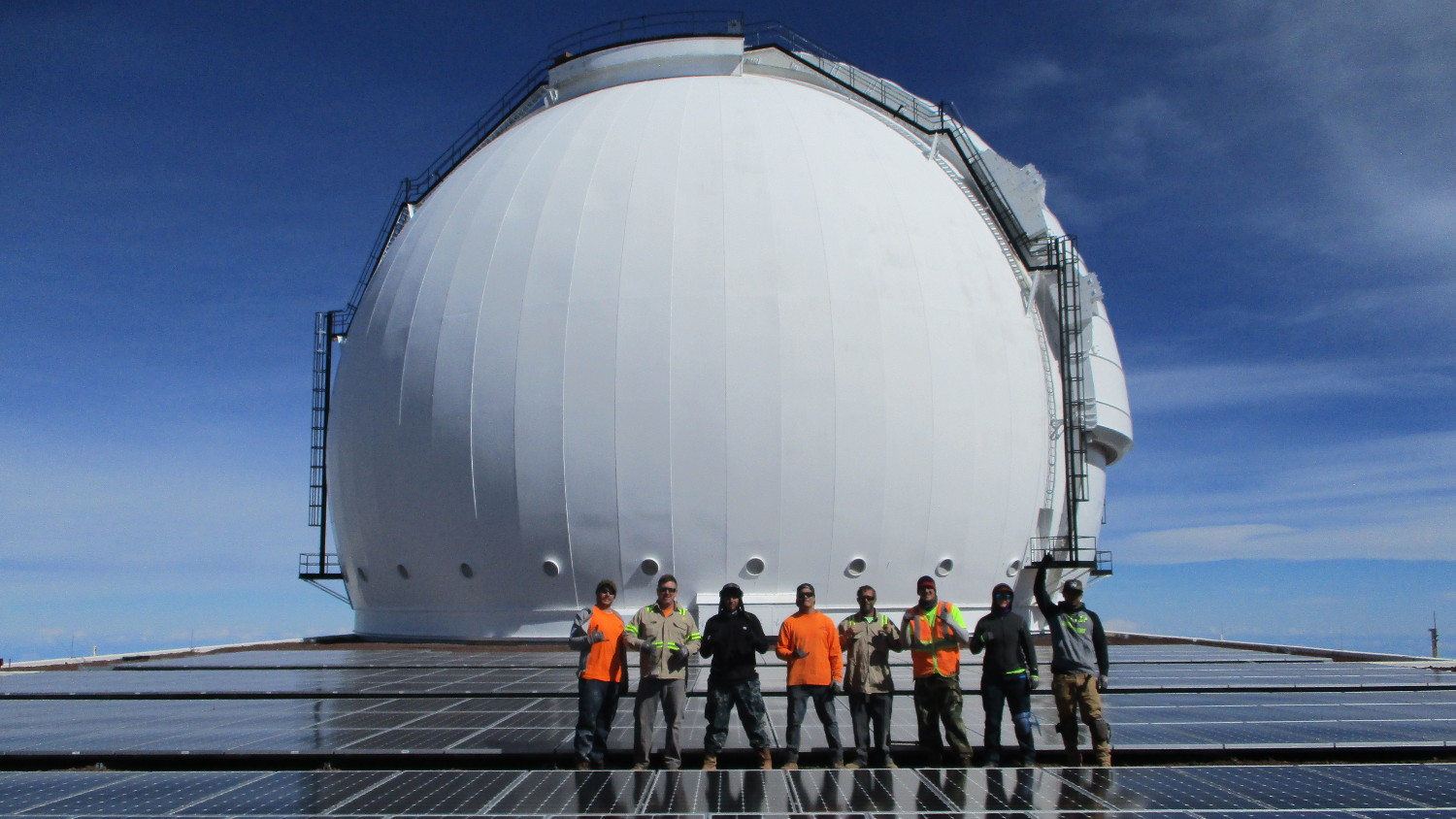 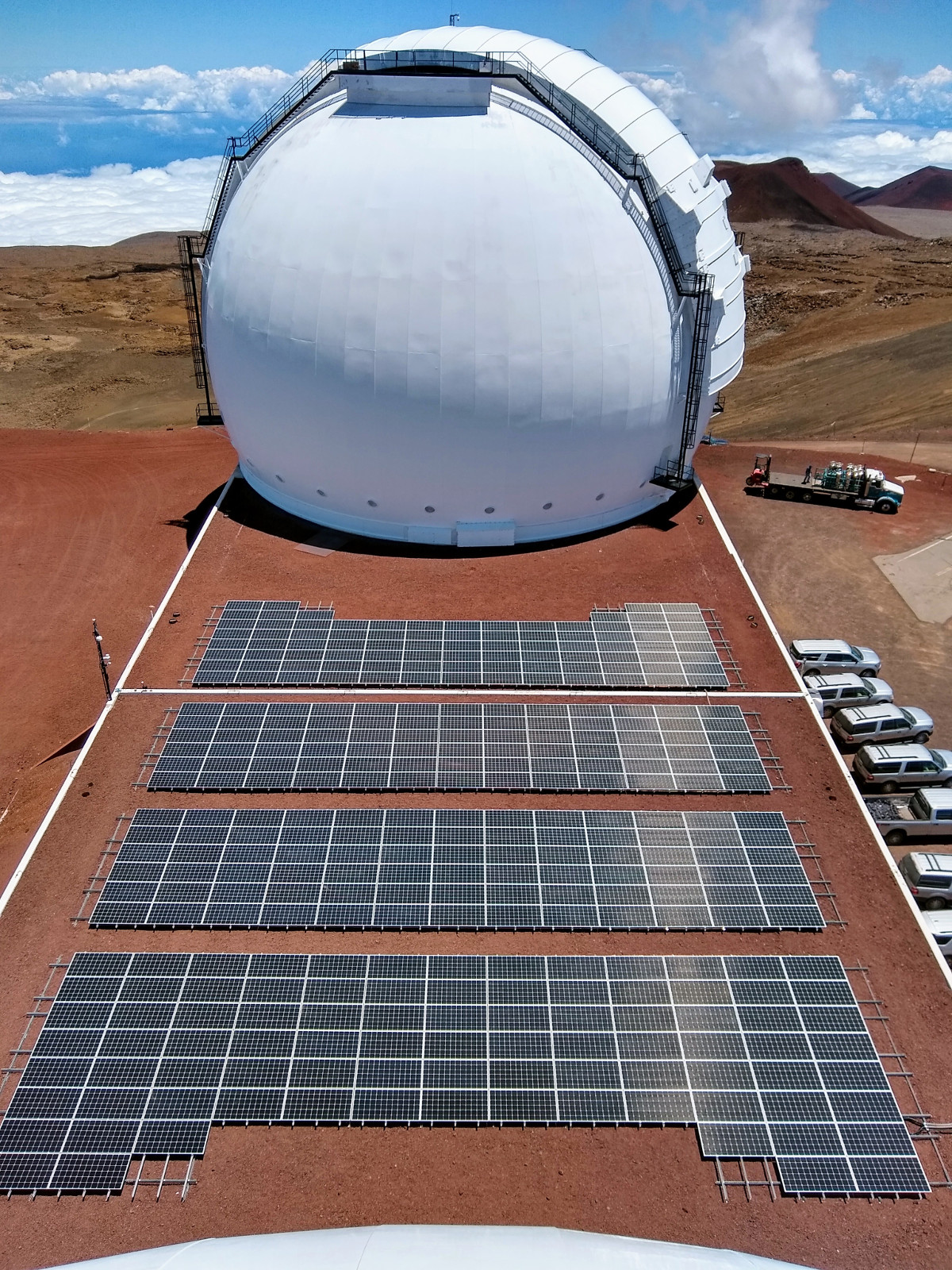 (BIVN) – The W. M. Keck Observatory announced on Thursday that it has successfully installed a solar photovoltaic system on the rooftop of its telescope facility on the summit of Maunakea.

Here is the Keck news release, accompanied by photos of the project.

In its commitment to reduce the organization’s carbon footprint and lower the cost of energy, W. M. Keck Observatory and Duke Energy’s REC Solar are pleased to announce the completion and operation of a solar project atop Maunakea on the Big Island of Hawaiʻi.

The solar photovoltaic (PV) system is on the rooftop of Keck Observatory’s telescope facility between the domes of the twin Keck I and Keck II – among the world’s largest optical and infrared telescopes. The system will annually produce 259.1 MWh of energy, which will reduce approximately 10-15% of the observatory’s need for electrical power and 183 metric tons of carbon emissions.

“Incorporating renewable energy generators such as solar PV is important to Keck’s core values of stewardship and service. It will reduce our reliance on electricity derived mainly from fossil fuels, which underscores our efforts to be good stewards of the planet,” says project lead Mark Devenot, infrastructure specialist at Keck Observatory.

The solar site is the world’s largest commercial solar system installed at the highest altitude. Hawaiian Electric approved operation of the PV system on September 30. It consists of a 133-kW photovoltaic array and 332 solar panels that are strategically placed on the unique 20,940 square-foot ballasted roof to avoid snow and ice fall from the domes.

“One of the biggest challenges was attaching the PV array to this type of roof, which has no structural framework to anchor the system,” says Devenot.

To address this issue, M3 Engineering and Technology of Arizona designed an innovative, one-of-a-kind solution and developed a custom PV roof racking system. 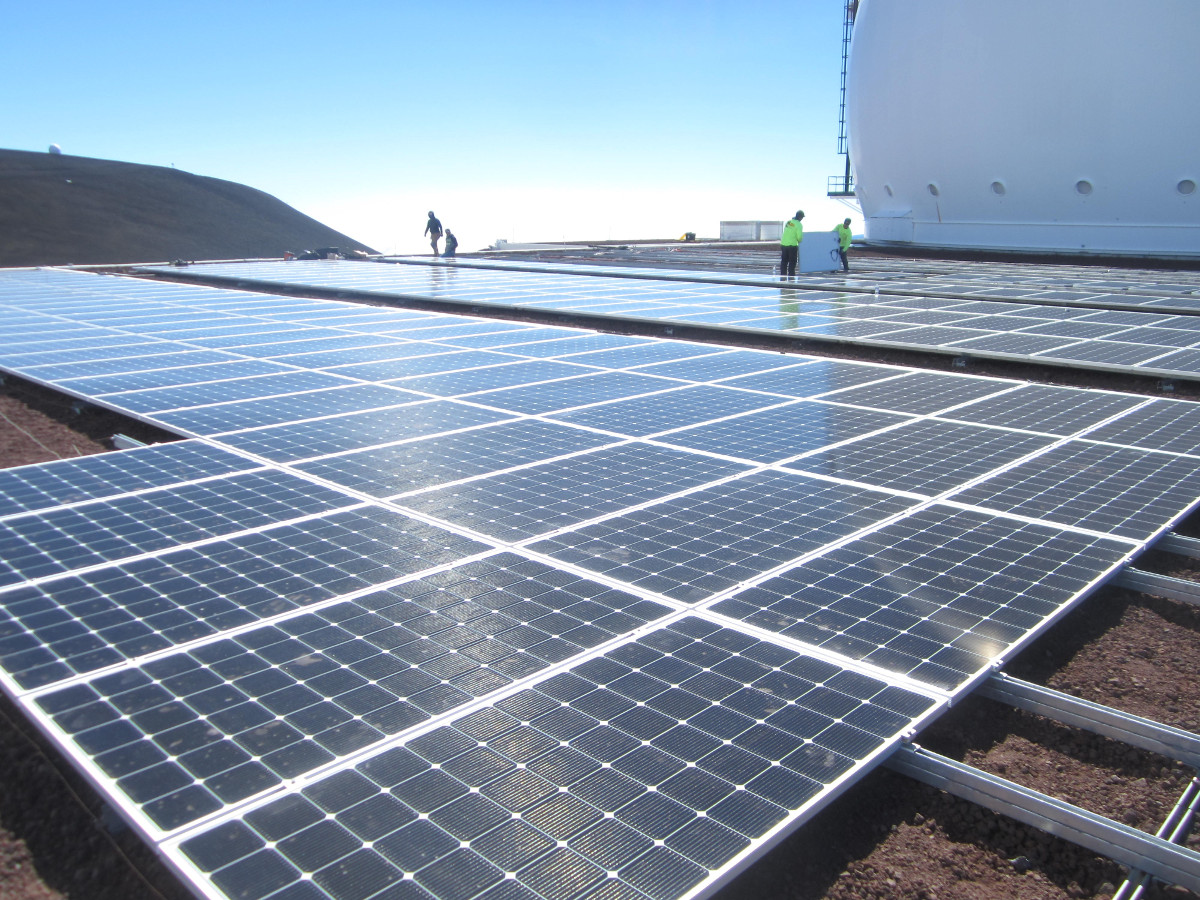 Two Hawaii-based contractors performed the installation work. Sakoda Construction of Hilo assembled the structure that supports the solar panels; REC Solar’s team from Honoluolu on the island of Oʻahu installed the electrical controls and solar panels.

“Keck Observatory has been a great business partner for my small local Hilo company,” says Adam Long, lead contractor and owner of Sakoda Construction. “Over the past five years we have worked on many projects ranging from small renovations at their office facility to building their segment repair laboratory space. Since we all live on island, it not only helps the company build a relationship, but all the income generated from these projects is put back into the local economy. I am not only grateful for the business opportunity but also a chance to help contribute to the expansion of our scientific knowledge and community. It always amazes me to see these facilities and the work that they are doing.”
Despite the difficulties that come with working at high altitude – about 40% less oxygen than at sea level – plus several snow days and the aftermath of an unusually powerful winter storm in February 2019, the team was able to brave the elements and successfully complete the project.

“Incorporating rooftop solar at Keck Observatory has been a special experience for the REC Solar team due to the project’s focus on science, safety, and innovation,” says Dan Alcombright, managing director, growth implementation at Duke Energy. “Our team remained respectful of land and wind limitations throughout construction and leveraged our local experience and detailed weather data to engineer solar with specialized mechanical attachments that can handle the wind gusts and climate of a Pacific island at high altitude. We’re pleased to be able to provide Keck with a viable energy solution that positively impacts both their organization and the environment.”

At high altitude, the panels will catch more photons and produce more energy than at sea-level locations. This is because sunlight atop Maunakea doesn’t have to travel through as much of the Earth’s atmosphere where the photons could be absorbed by something else. Having 40% less atmosphere, which is one of the reasons that makes Maunakea one of the best places on Earth to conduct astronomy, also makes for efficient solar energy generation.

REC Solar has developed more than 100 commercial and utility-scale solar projects across the Hawaiian Islands, including Keck Observatory’s Waimea hheadquarters in 2013. This new rooftop solar installation at Keck Observatory’s telescope facility on Maunakea provides a unique research opportunity for the team to gather data on how solar panels operate in a thinner atmosphere with a high UV index and under higher than average winds. The team will continue to monitor and analyze these conditions for future solar installations at high altitudes.

“I am proud and excited that our observatory took the initiative to install PV and do our part for the environment while simultaneously saving costs,” says Marc Kassis, instrument program manager at Keck Observatory. “We made great strides in PV by installing panels in previous years at our headquarters, and now we are taking advantage of solar power at our telescope facility on Maunakea. This is fantastic and is a total win all around.”