Video recorded by Visionary Video. A synthesized voice was utilized in the narration for this story.

PAʻAUILO, Hawaiʻi - The Community Meal team of St. James' Episcopal Parish have served over 400 meals per week at St. Columba's Episcopal Church in Paauilo since the pandemic began. 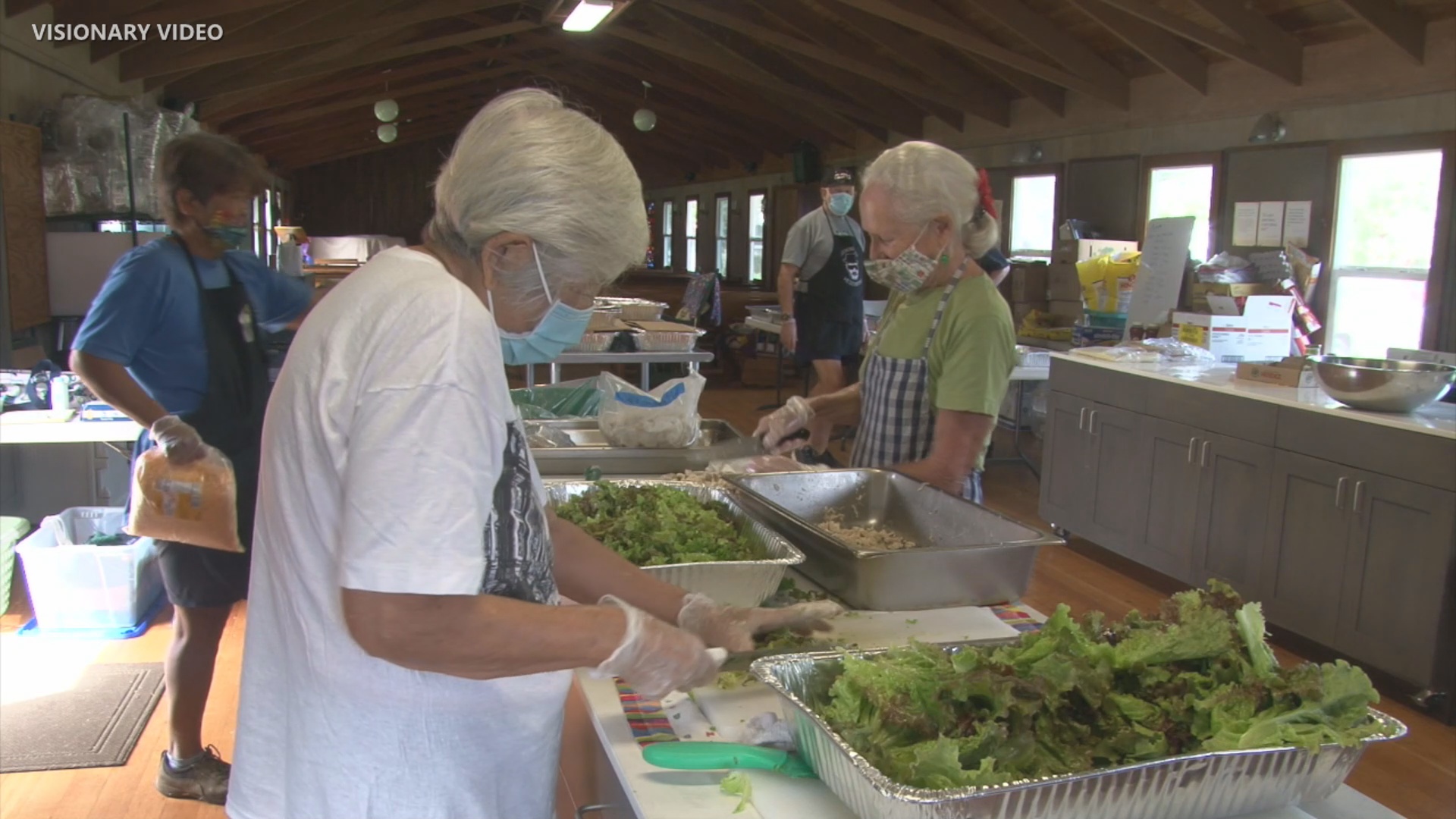 In a small town on the Hawaii island’s Hamakua coast, cars line up for a hot meal. Back in April, in response to the pandemic, the Community Meal team of St. James’ Episcopal Parish launched the Paʻauilo Community Meal at St. Columba’s Church, which is a part of St. James’ Parish.

Over 400 meals per week are served at St. Columba’s.

LINDA LUNDGREN: “The reaction of the community has been so awesome. They are thrilled that we’re having this meal, especially when everything was just so bad.”

Linda Lundgren is the church priest.

LUNDGREN: “They would line up and come with their their boxes and their coolers, and they would pick up, and it was just wonderful. In fact, I had one family come to me and they said thank you for bringing light back into our community.”

Every week, the food is prepared at St. James’ kitchen in Waimea. Its then transported to St. Columba’s, where the meals are boxed and distributed.

SUE DELA CRUZ: “Today is Tuesday, the second-best day of the week for me.”

DELA CRUZ: “What we’re doing up here in Waimea is we’re prepping green chicken, enchiladas and Dorito salad, and Mexican rice. That’s today’s meal that we’re going to be transporting down. We say we build community one meal at a time, but we also are feeding the body and the soul.”

Over 11,000 meals have been distributed in Paʻauilo over the last 34 weeks. The effort is powered by volunteers and donations.

“Making a meal is a little – for 425 – is very time consuming. A lot of the recipes we use is all family recipes. So my job as a coordinator is try and expand it to make sure I get enough ingredients to make 425 servings. So we get farmers that come in, we don’t know what they’re bringing. We basically use – mainly – the lettuce, tomatoes, cucumbers that we have for our salad. So, anything that the farmers bring in, I mean, they have extra then we try to either incorporate it in the salad or we actually hold it off and then do what we call a produce bag. Like today, HPA dropped off a basket of nicely homegrown carrots which will be in the produce bag today.”

The weekly community meal has also served to revitalize the St. Columba’s church.

LUNDGREN: “What’s really cool is that St. Columba’s is getting to be known, now. Because we were closed for 20 years and we were replanted in 2013 and (they) just didn’t know we were back.”

Plans are in the works to completely rebuild the kitchen at St. Columba’s, so that the team can eventually prepare and cook all the meals on-site.

LUNDGREN: “In 2017, we had a meeting. I was like, what do we want to do because we’ve been replanted, what is it that you want to do? And we also – well, we need a kitchen to do anything. So we started fundraising, and the first fundraiser we had was papa sweetbread and we made $1,200. And then we had another fundraiser and we made another $1,200. And then we had a thrift sale and we made a little bit there. Well, then word got out that we needed a kitchen and we put out some, just some feelers and different things, and people started… donating us money, and then we have a few grants that we did we were able to get thanks to Tim Bostock. Awesome, awesome man. And people had just started giving to us. Like how much does it take to put on a kitchen?

“We first thought it would be about $20,000. Well, no, that’s not even close to what it’s going to be. But we’re going to have a certified kitchen. We’re going to bring um meals out and also – what we really, really wanted to do with St. Columba’s – was open up this building for families.”

Guests come from up and down the Hāmākua Coast, with the majority being from Paʻauilo. The pandemic response has seriously hurt the local economy. Organizers say the need is great. The community meal has some needs, also.

For more information about the Community Meal please visit this website.

To Sponsor a Community Meal please visit this webpage.