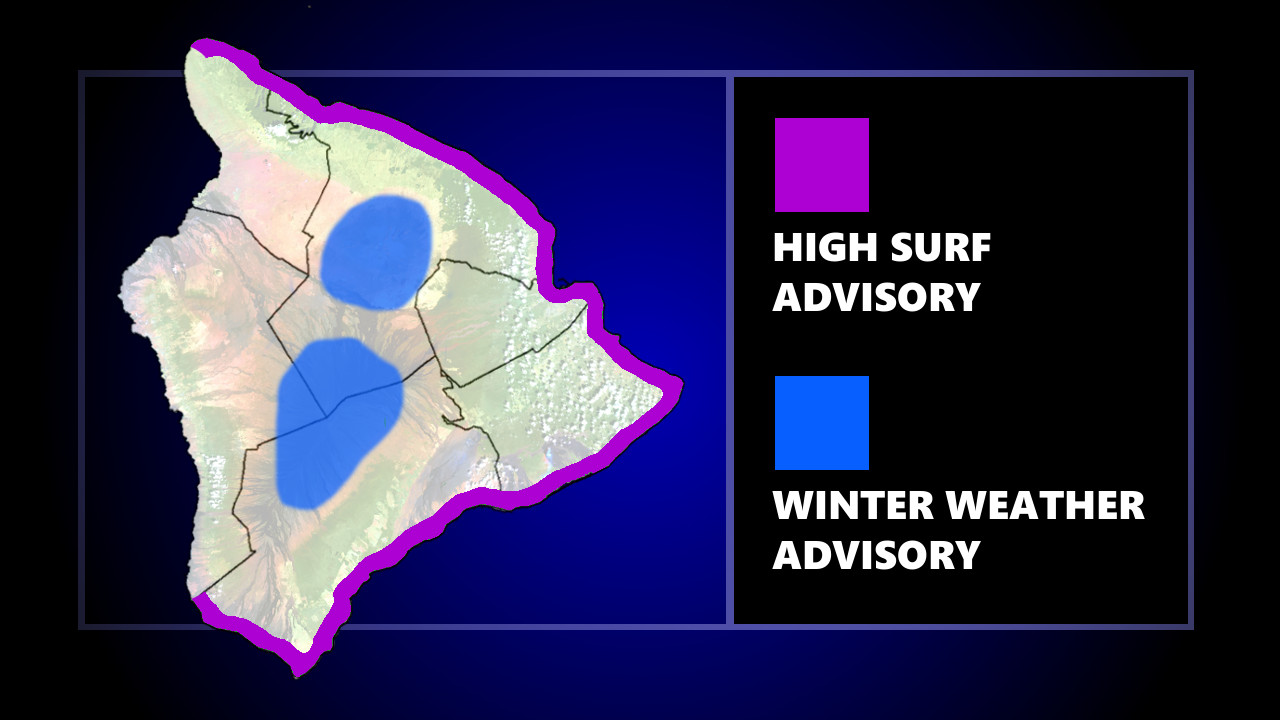 HAWAIʻI ISLAND - A surge of moisture moving in tonight will produce a wintry mix over the Big Island summits through Friday, and high surf is headed for east facing shores.

(BIVN) – The National Weather Service in Honolulu has issued a Winter Weather Advisory for the summits of Maunakea and Mauna Loa, and a High Surf Advisory for east facing shores of the Big Island.

A Wind Advisory has also been issued for various Hawaiʻi island locations starting at midnight.

“A surge of moisture moving in tonight will produce a wintry mix over the Big Island summits through Friday,” forecasters wrote. “Snow levels are expected to be around 13,000 feet during this time.”

Total snow accumulations of up to two inches will be possible at the summits of Maunakea and Mauna Loa.

“A long-period northwest swell will maintain elevated surf along exposed north and west facing shores through tonight,” the National Weather Service added in a later High Surf Advisory. “In addition, increasing trade winds near and upstream of the islands will bring rough and choppy short-period waves to east facing shores through Saturday.”

East facing shores of the Big Island could see surf increasing to 7 to 10 feet.

“There are no closures at this time but be aware that beach and road closures may occur at any time,” the Hawaiʻi County Civil Defense stated. “Beach-goers, swimmers, and surfers should heed all advice given by ocean safety officials and exercise caution if you enter the water.”

Meanwhile, a Wind Advisory goes into effect at midnight, as “high pressure strengthening far northeast of the state will produce strong and gusty trades beginning late tonight and continuing through Friday,” forecasters wrote. “Trade winds are expected to gradually weaken over the weekend.”

East-northeast winds 20 to 35 mph with localized gusts to 50 mph expected. “Winds this strong are capable of downing tents or other temporary structures, as well as downing trees and causing power outages,” the National Weather Service said.