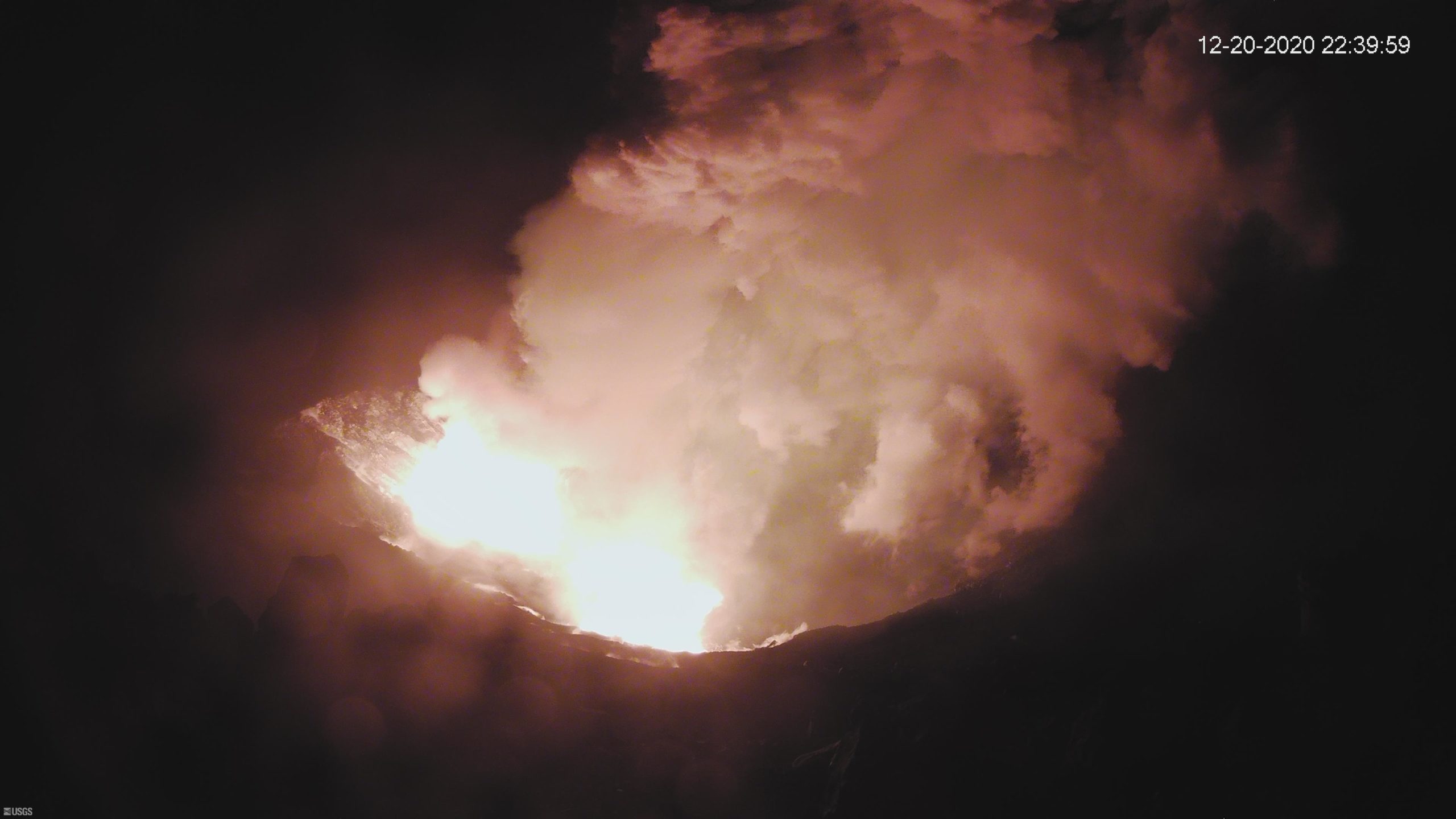 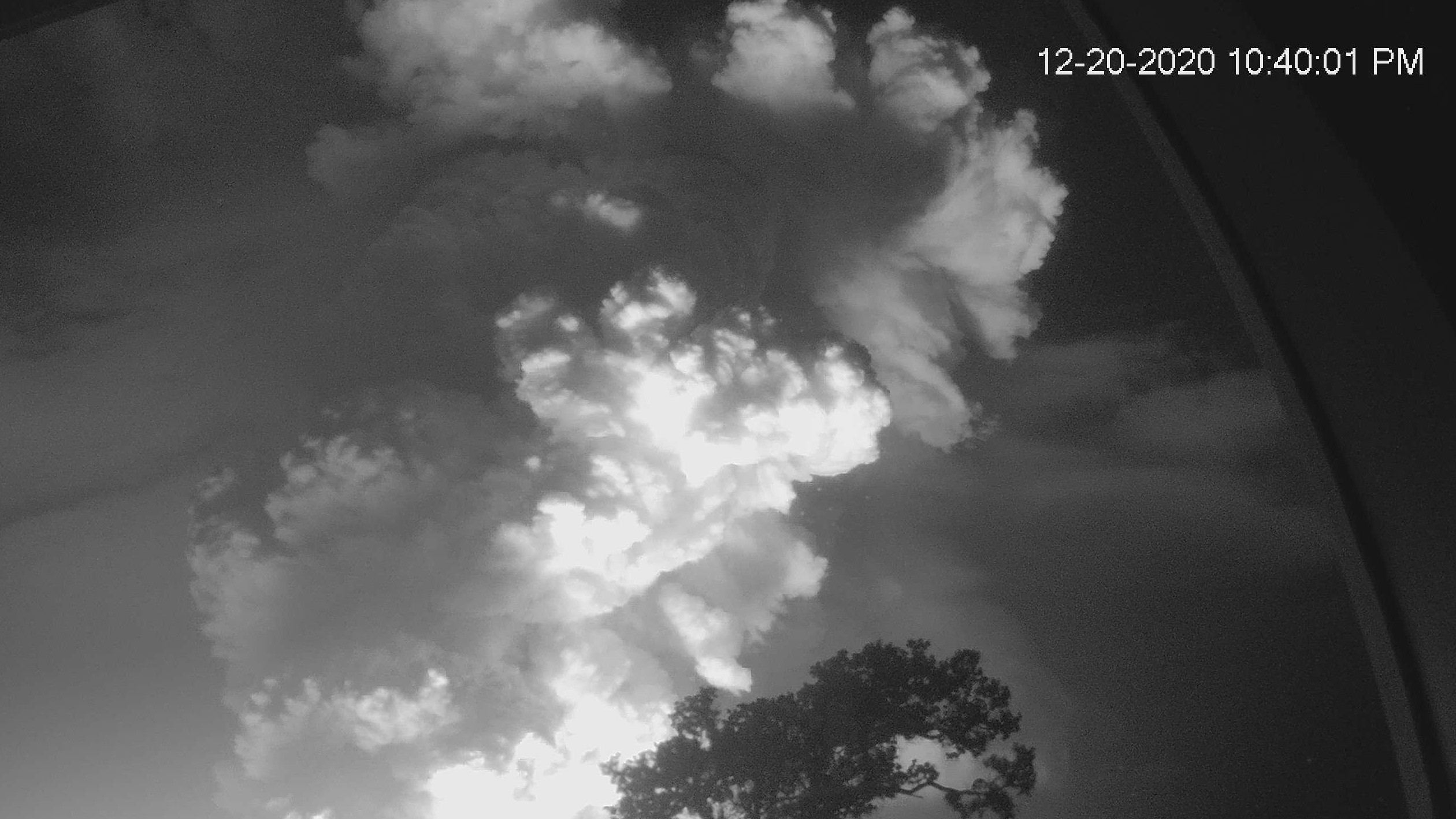 USGS webcam shows a view of what appears to be an ashcloud at Kilauea summit.

(BIVN) – On Sunday night, Kīlauea volcano began erupting at the summit, after a swarm of earthquakes rumbled on the south side of the caldera. A larger earthquake, measuring a Magnitude 4.4, shook the south flank of the volcano and was felt across the Big Island.

The Hawaiian Volcano Observatory reports an eruption at the Halemaumau Crater of the Kilauea Volcano.  Trade winds will push any embedded ash toward the Southwest.  Fallout is likely in the Kau District in Wood Valley, Pahala, Naalehu and Ocean View.  Stay indoors to avoid Exposure to ash.

The Pacific Tsunami Warning Center reports the earthquake which occurred at approximately 10:36 PM in the vicinity of the South Flank of Kilauea was not large enough to cause a tsunami for the Island of Hawaii.  I say again, there is NO TSUNAMI THREAT to the Island of Hawaii.

Preliminary data indicates that the earthquake measuring a magnitude of 4.4 was centered in the vicinity of the South Flank of Kilauea.

As in all earthquakes, be aware of the possibility of after-shocks.  If the earthquake was strongly felt in your area, precautionary checks should be made for any damages; especially to utility connections of Gas, Water, and Electricity.

Shortly after approximately 9:30 p.m. HST, the USGS Hawaiian Volcano Observatory (HVO) detected glow within Halemaʻumaʻu crater at the summit of Kīlauea Volcano. An eruption has commenced within Kīlauea’s summit caldera. The situation is rapidly evolving and HVO will issue another statement when more information is available.

HVO continues to monitor the volcano closely and will report any significant changes. 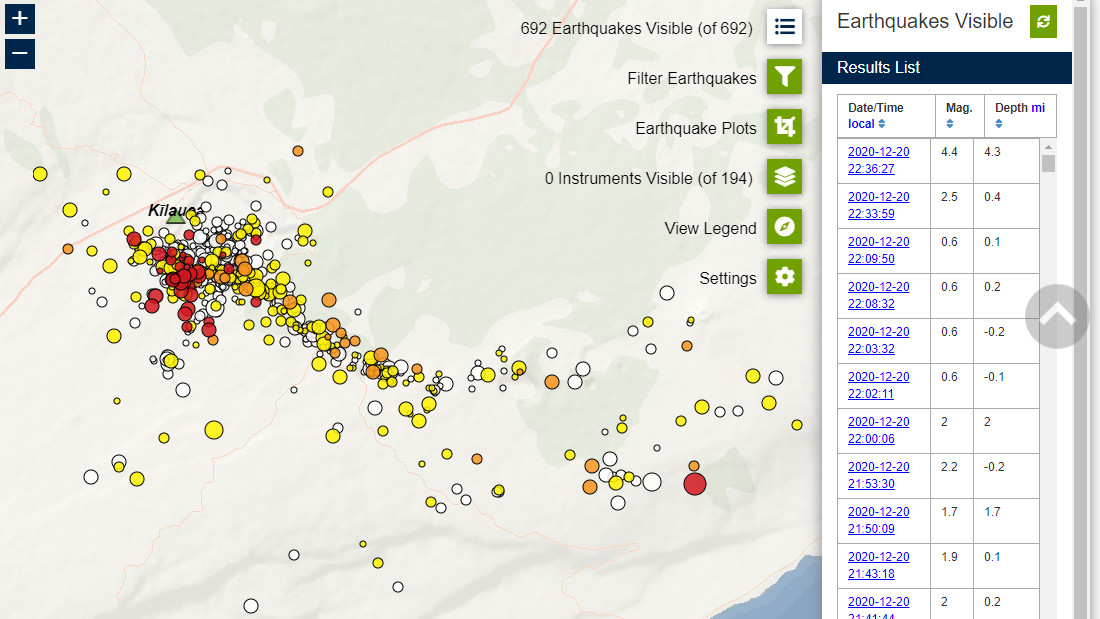 USGS interactive map shows the earthquakes just before the eruption was confirmed.

According to the recent observations made by scientists:

For the past several weeks, the USGS Hawaiian Volcano Observatory (HVO) has recorded ground deformation and earthquake rates at Kīlauea Volcano’s summit and upper East Rift Zone that have exceeded background levels observed since the conclusion of the 2018 lower East Rift Zone eruption and summit collapse.

Beginning in September 2020, increased rates of uplift were observed by GPS stations in Kīlauea’s upper East Rift Zone. In the past month, increased uplift has also been measured at GPS stations in Kīlauea’s summit region. While uplift related to post-collapse inflation of the summit reservoir has been occurring since March of 2019, rates have been steadily increasing in recent months and are currently higher than they have been since the end of the 2018 eruption.

In late November 2020, increased earthquake rates began when seismic stations recorded an average of at least 480 shallow, small-magnitude earthquakes (97% of which were less than or equal to magnitude-2) per week occurring at depths of less than 4 km (2.5 miles) beneath Kīlauea’s summit and upper East Rift Zone. This compares to a rate of fewer than 180 per week following the end of Kīlauea’s 2018 eruption and through early November 2020.

On December 2, 2020, GPS stations and tiltmeters recorded a ground deformation event at Kīlauea’s summit. Accompanied by earthquake swarms, the patterns of ground deformation observed were consistent with a small dike intrusion of magma under the southern part of Kīlauea caldera. The injection resulted in about 8 cm (3 inches) of uplift of the caldera floor, and modeling suggests that it represented 0.4–0.7 million cubic meters (yards) of magma accumulated approximately 1.5 km (1 mile) beneath the surface. Though the intrusion did not reach the surface and erupt, it represented a notable excursion from trends observed in Kīlauea summit monitoring data streams following the end of the 2018 eruption.

On December 17, 2020, seismometers detected a notable increase in occurrence and duration of long-period seismic signals beneath Kīlauea’s summit, which are attributed to magmatic activity. Whereas this type of seismicity was observed on average once every few weeks following the 2018 eruption, rates have increased to over a dozen in the past several days.

Other monitoring data streams including volcanic gas and webcam imagery were stable until this eruption.

An earthquake swarm began on the evening of December 20, accompanied by ground deformation detected by tiltmeters. An orange glow was subsequently observed on IR monitoring cameras and visually beginning approximately 21:36 HST.

The Pacific Tsunami Warning Center said a tsunami was not expected following the Magnitude 4.4 earthquake on the south flank of Kīlauea. 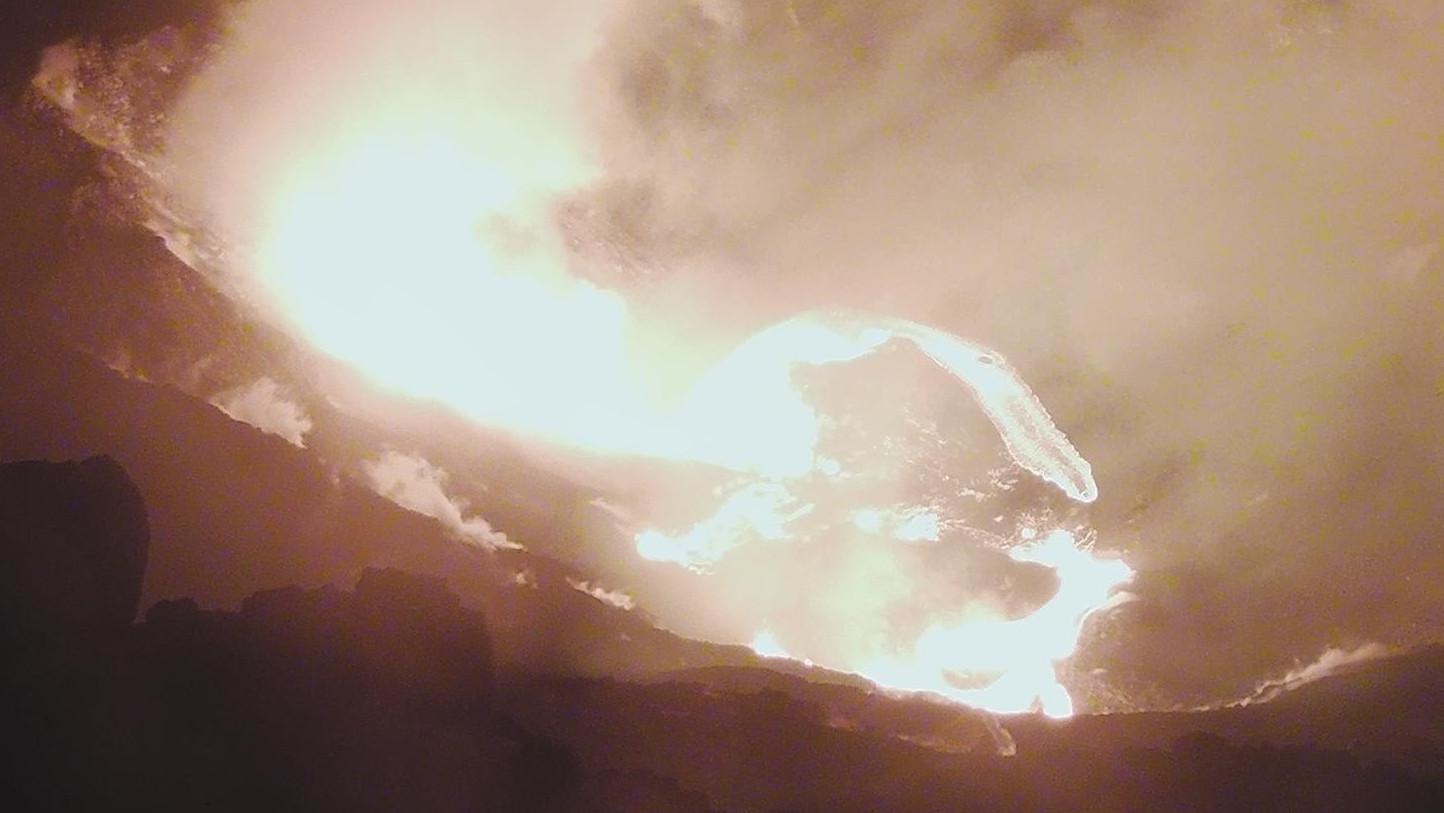 All available data indicate that the eruption that occurred at Halemaʻumaʻu late Sunday night is easing, with just a low-level steam cloud lingering. Big Island Civil Defense reports that no ashfall was observed near and downwind of the crater, including on Highway 11, and that the eruption may have been primarily comprised of steam. We will continue to monitor and will another statement if additional eruptions are observed.