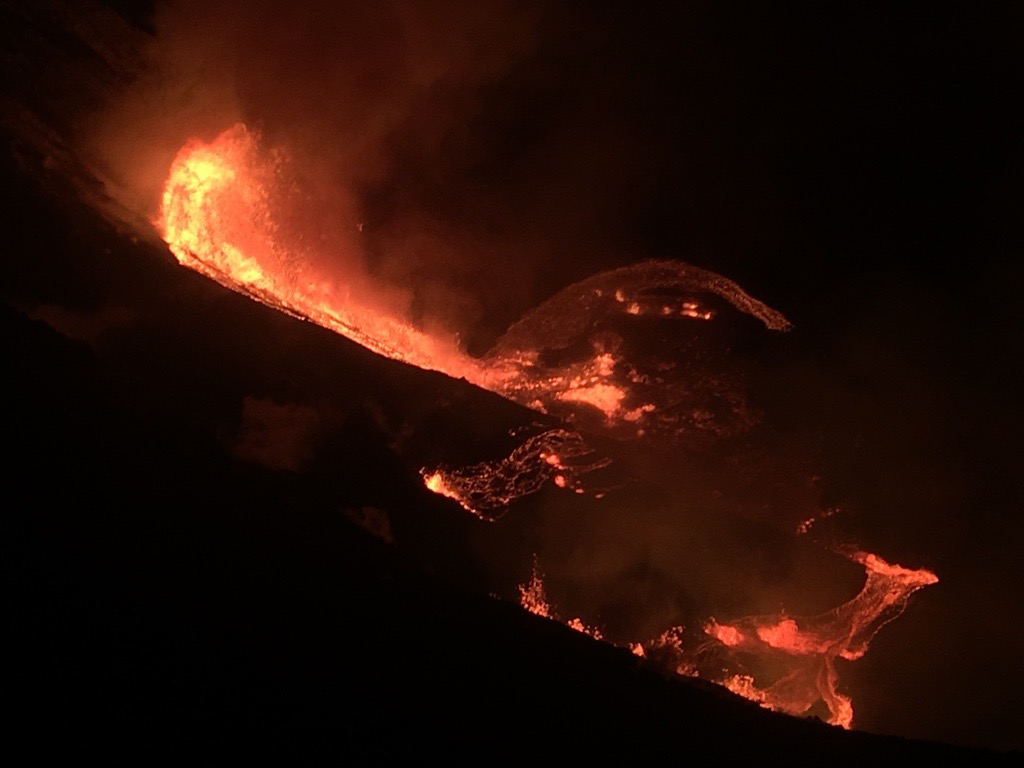 USGS PHOTO: A view of Halemaʻumaʻu crater, where multiple fissures began erupting on the evening of December 20. The northern fissure, pictured, was producing the tallest lava fountain at roughly 50 m (165 ft), and all lava was contained within Halemaʻumaʻu crater in Kīlauea caldera. 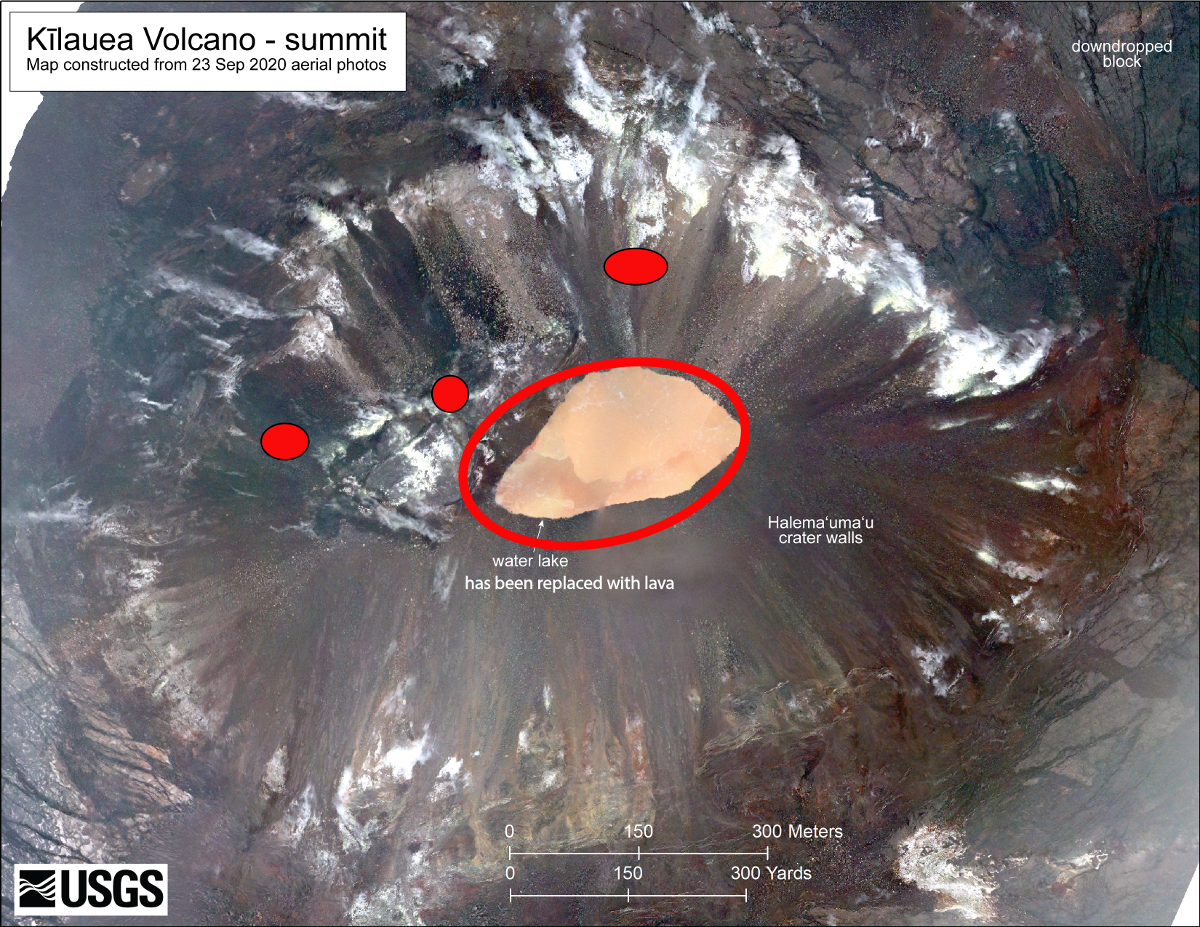 Shortly after approximately 9:30 p.m. HST, an eruption commenced at the summit of Kīlauea Volcano. Red spots are the approximate locations of fissure vents feeding lava flowing into the bottom of Halema‘uma‘u crater. The water lake at the base of Halema‘uma‘u crater has been replaced with a growing lava lake. Lava coverage is deeper by 10 m (32 ft) or larger and bigger in extent than the water in this photo (base map is from imagery collected on September 23, 2020). The easternmost vent is currently exhibiting fountains up to approximately 50 m (164 ft) high with minor fountaining on the west side. Occasion blasts of uncertain origin are occurring from lava lake surface. USGS photo.

(BIVN) – The Sunday evening eruption of Kīlauea – the first eruptive activity at the volcano in over two years – has already erased the growing summit water lake and is replacing it with a new lava lake at the base of the crater.

The eruption started suddenly at approximately 9:30 p.m. HST during a brief earthquake swarm at the summit. Scientists say multiple fissures opened on the walls of Halemaʻumaʻu crater. The lava cascaded into the summit water lake, boiling off the water and forming a new lava lake at the base of the crater.

The activity is contained within Halemaʻumaʻu crater in Kīlauea caldera, scientists say. One of the fountains within the crater was 165 feet tall. 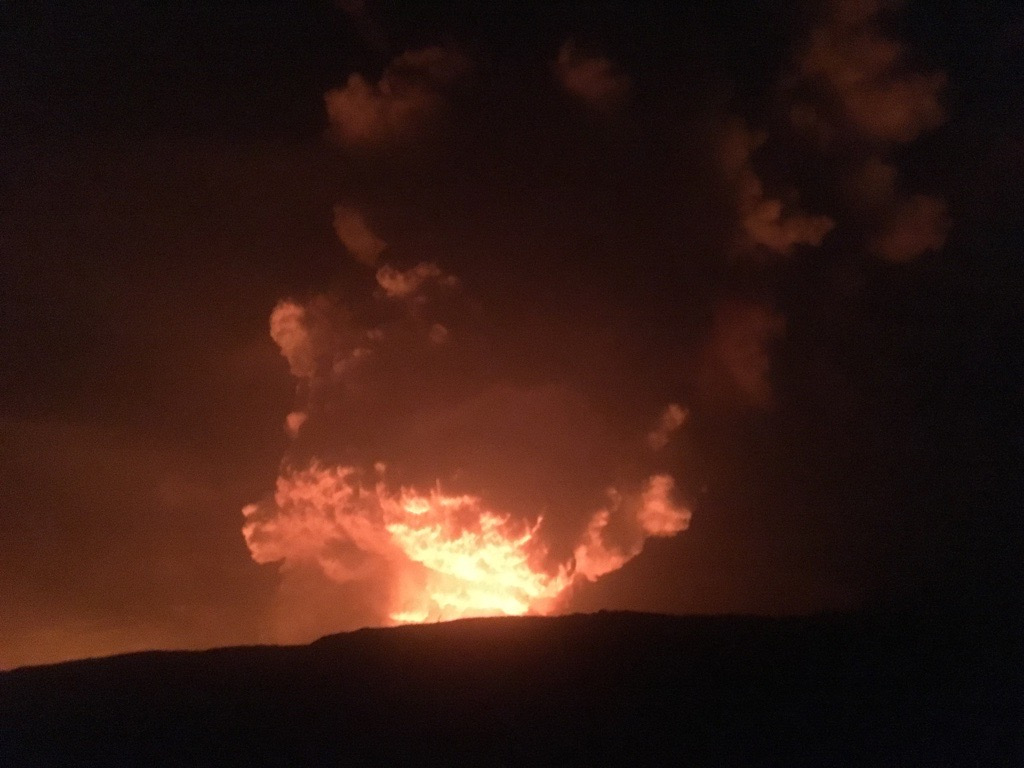 A steam and gas plume from the eruption in Halemaʻumaʻu crater at Kīlauea summit. Lava contained within the crater illuminates the steam produced by the lava interacting with, and boiling off, the summit water lake that resided in the base of Halemaʻumaʻu crater. USGS photo.

The National Weather Service posted an update at 12:21 a.m. Monday morning, saying that “all available data indicate that the eruption that occurred at Halemaʻumaʻu late Sunday night is easing, with just a low-level steam cloud lingering.” The forecasters said that the Hawaiʻi County Civil Defense reported that “no ashfall was observed near and downwind of the crater, including on Highway 11, and that the eruption may have been primarily comprised of steam.”