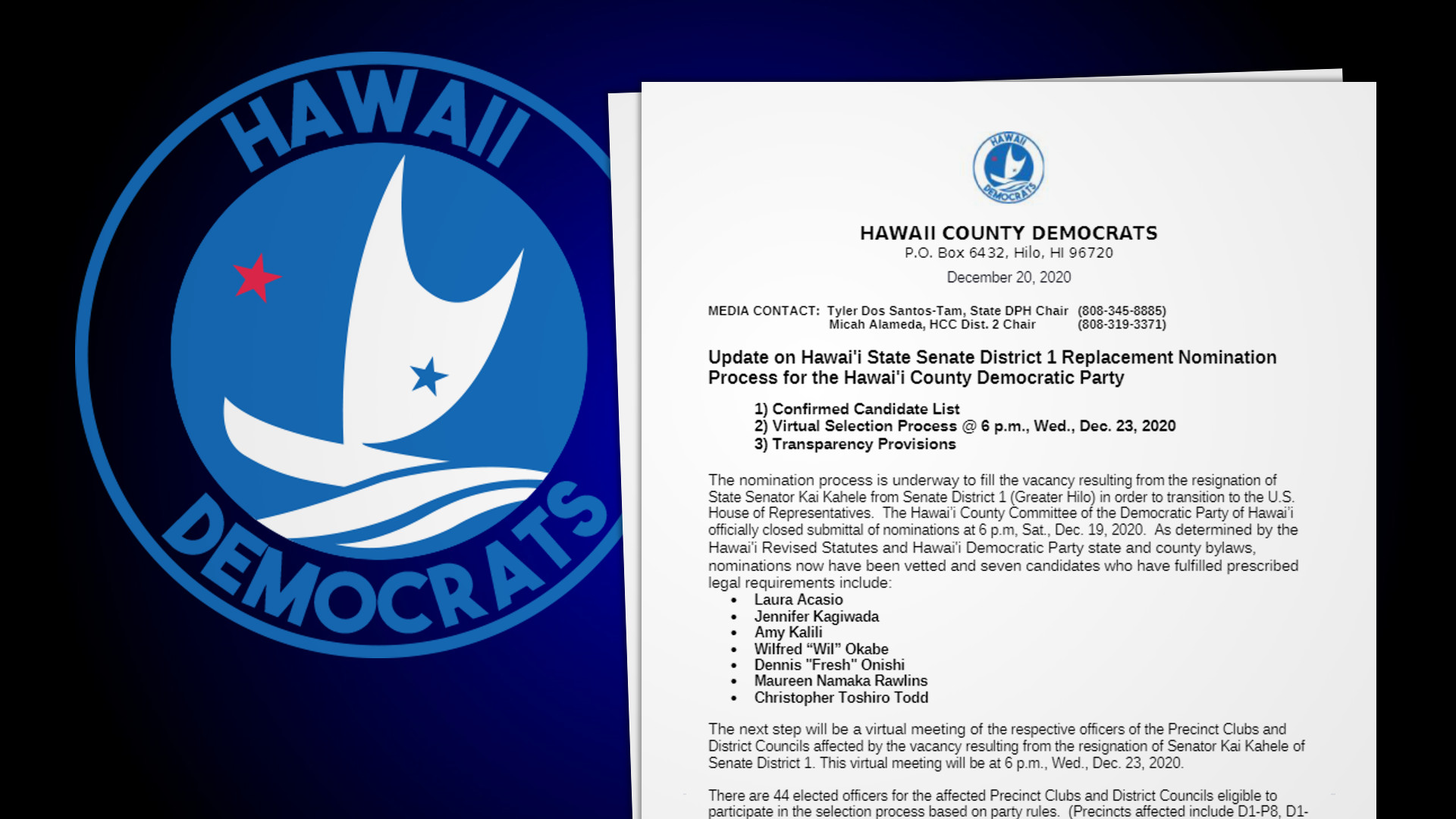 7 Democrats Nominated, 1 Will Be Hilo’s Next State Senator

(BIVN) – Seven candidates who have been vetted by the Hawaiʻi County Democratic Party are stepping forward with the hope that they may be chosen to serve as the next Hilo’s next District 1 State Senator.

Democrats say the nomination process, determined by the Hawaiʻi Revised Statutes and Hawaiʻi Democratic Party state and county bylaws, is underway to fill the vacancy resulting from the resignation of State Senator Kai Kahele following his election to the U.S. House of Representatives.

The Democrats say announced the seven candidates “who have fulfilled prescribed legal requirements” include:

The next step will be a virtual meeting of the 44 elected officers for the affected Precinct Clubs and District Councils to participate in the selection process based on party rules. The virtual meeting will be at 6 p.m., on Wednesday, December 23.

The Hawaiʻi County Democrats provided these details on the selection process:

For the Dec. 23 nominating meeting, the three District Chairs have appointed Jeff McKnight to assist and record the selection process. Jeff serves as the elected County Secretary for the Hawaii County Committee (HCC) and is not a voting member of this selection body. Assisting McKnight will be Dist. 3 Chair Katie Kamelamela, and also HCC members Shannon Matson and Patti Cook. Neither Matson nor Cook are voting members of the selection body.

This virtual meeting will be only open to the above individuals. However, to ensure transparency, it will be streamed “live” on the Hawai’i County Facebook page up to the point of actual voting. This means party members and the general public may watch presentations by the candidates. Then, prior to the start of voting, the “live” stream will be discontinued, though the entire meeting will be recorded.

To ensure transparency and accuracy, votes will be recorded on screen – fully visible to all Precinct Club and District Council officers who are online and eligible to vote. In addition, a separate tally sheet will be maintained to verify accuracy.

Please note that candidates who are also elected Precinct Club and District Council Representatives will participate in the voting.

Once voting is complete, a public announcement will be made about the three names that will be submitted first to the State Party Chair, and then to the Governor to make a final determination of the new State Senator for Hawaiʻi Island’s District 1.