Video and photos are from the USGS Hawaiian Volcano Observatory, National Park Service, Tropical Visions Video, and CFHT. The Hawaii County Civil Defense message was provided by the County of Hawaii. A synthesized voice was utilized in the narration for this story.

HAWAIʻI ISLAND - Today, the USGS lowered the Volcano Alert Level from Warning to Watch, and the Aviation Color Code from Red to Orange, reflecting the less-hazardous nature of the ongoing eruption. 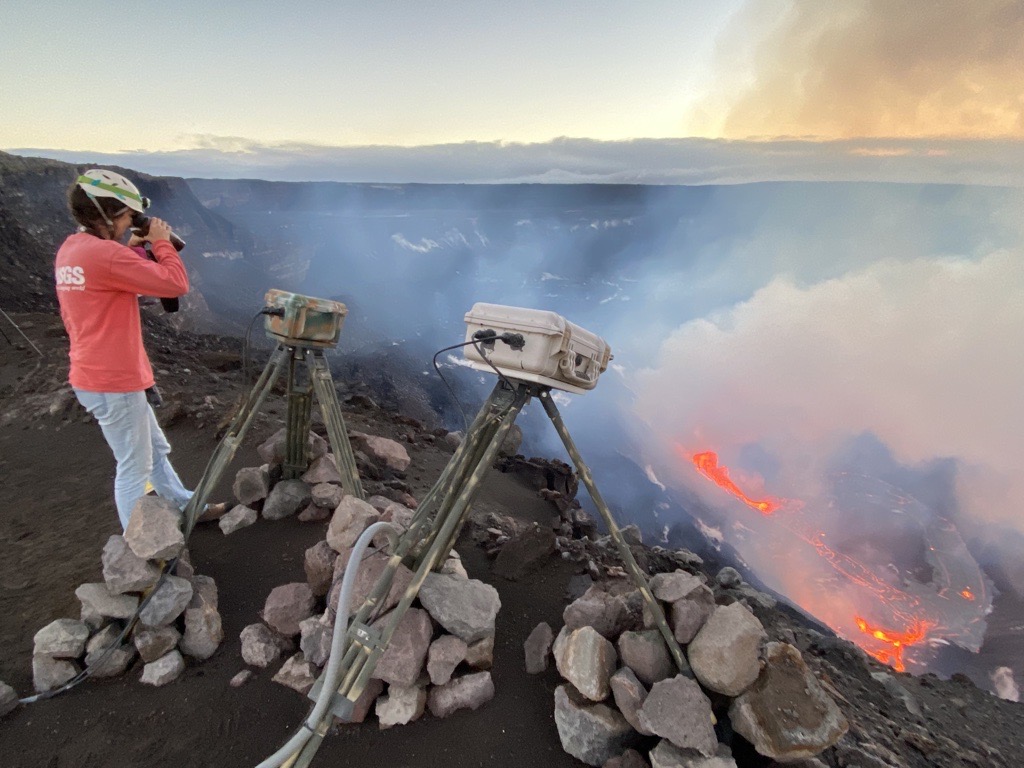 USGS HVO: Dawn arrives at Kīlauea’s summit, where scientists are monitoring the new eruption within Kīlauea caldera. Since Dec 20 (~9:30 pm), 3 fissure vents on the wall Halemaʻumaʻu crater have fed lava into a growing lava lake.

Hawaiʻi welcomes Pele back to the surface of Kīlauea volcano.

A Hawaiian oli sounds out into the night sky at Hawaiʻi Volcanoes National Park, where a small crowd gathered overnight for a distant glimpse of the new eruption at the summit.

It has been over two years since the red glow of lava has been seen on Hawaiʻi island. This time, the eruptive activity is confined to the summit caldera, and has not threatened life or infrastructure.

The start of the eruption was marked by a dramatic a steam cloud. This steam cloud could be seen miles away from the summit of Maunakea. This video was captured through summit cameras by a Remote Observer Lisa Wells using the Canada France Hawaii Telescope. The steam column can be seen billowing up over the cloud tops. The glow of the eruption lights up the sky from below.

Emergency officials said on Monday morning that the new eruption has stabilized. There is the morning message from Hawaii County Civil Defense:

HCCD: “The Hawaiian Volcano Observatory reports the situation at the Halemaʻumaʻu Crater of the Kilauea Volcano has stabilized. The crater lake has evaporated and is slowly being replaced with a lava lake. The threat of ash fallout is very low but is possible in the Kau and South Kona Districts. Please visit Hawaiian Volcano Observatory website for the latest information on Kilauea Volcano. You will be informed of any change in conditions that may affect your safety.”

On Sunday night, at approximately 9:30 p.m. Hawaiian Time – and amidst a swarm of small earthquakes – a glow was seen within the volcano summit crater. This webcam captured the moment that the eruption commenced.

About an hour later, a Magnitude 4.4 earthquake on the Volcano’s south flank shook the island. The area has been the site of over 30 earthquakes of a magnitude 4 or greater during the past 20 years. Most are caused by abrupt motion of the south flank, which moves to the southeast over the oceanic crust. Widespread damage was not reported.

The USGS Hawaiian Volcano Observatory lowered the Volcano Alert Level from Warning to Watch, and the Aviation Color Code from Red to Orange, reflecting the less-hazardous nature of the ongoing eruption.

The scientists later said the alert was at first raised to the maximum level due to the presence of the water lake at the summit, and the potential for steam-driven explosions. But, the water lake has since boiled away, and the eruption is currently confined to summit crater.

HVO said activity over the past ten hours has been characterized by three fissure vents on the north and northwest walls of the crater. Fountaining lava is estimated to be up to 82 feet high. The vents are feeding into a growing lava lake below.

The lava lake has been rising several yards per hour since the eruption began. It exhibits a circulating perimeter, but stagnant center.

The event has been accompanied by only moderate amounts of deformation, indicating deflation of a magma reservoir under Halemaʻumaʻu. Rates of tilting have decreased slightly since the beginning of the eruption.

Increased rates of seismicity in the summit region continue. Some of these earthquakes may be felt. A magnitude-4.4 earthquake located beneath Kīlauea Volcano’s south flank occurred on Sunday, December 20, at 10:36 p.m. HST.

Visitors to the Hawai’i Volcanoes National Park should note that under southerly wind conditions, rockfalls and explosions can result in a dusting of powdery to gritty ash composed of volcanic glass and rock fragments. These ashfalls represent a minor hazard, but visitors should be aware that dustings of ash around the summit are possible.

High levels of volcanic gas, rockfalls, explosions, and volcanic glass particles are the primary hazards of concern regarding this new activity. Scientists say it is unclear how long the current eruption will continue.

Kīlauea summit eruptions over the past 200 years have lasted from less than a day to more than a decade. HVO continues to monitor and they say they will report any significant changes. They are also in constant communication with Hawaii Volcanoes National Park, and the Hawaii County Civil Defense Agency.