A synthesized voice was utilized in the narration for this story. Video and photos are from the USGS Hawaiian Volcano Observatory, National Park Service, and Tropical Visions Video. 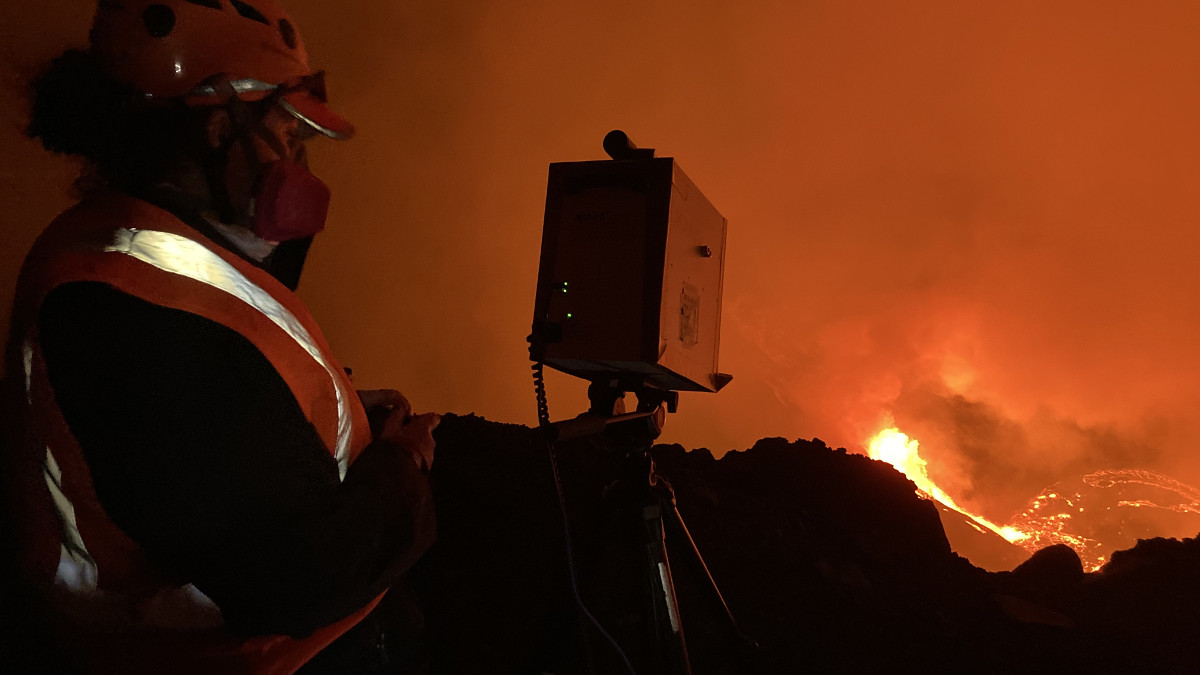 On the morning of Dec. 21, Hawaiian Volcano Observatory gas scientists use a FTIR spectrometer on the rim of Halema‘uma‘u crater. The FTIR measures the composition of the gases being emitted during Kīlauea Volcano’s ongoing summit eruption by measuring how the plume absorbs infrared energy. The plume being generate by the ongoing eruption is sulfur-dioxide (SO2) rich, but also contains wter vapor, carbon dioxide, and halogen gassses such as HCl and HF. USGS photo by T. Elias.

Lava continues to pour into the Kīlauea summit caldera from at least two vents, forming a growing lava lake below.

Seismicity is also elevated, but was stable over the last day. There were a few earthquakes and tremor fluctuations related to the vigor of the fountaining from the active fissures.

When measured last night, the lava lake was 1,598 feet below the crater rim and rising at more than 3 feet per hour.

They estimate the lava lake is now over 440 feet deep.

Of the three vents that initially erupted from the north and northeast walls of the crater, only two remain active. Scientists say the farthest east vent remains the most vigorous.

A helicopter overflight on Monday helped scientists produce a new thermal map showing the location of the new lava lake within the caldera.

Scientists calculate that since the start of the eruption on Sunday night, approximately 10 million cubic meters of lava have been erupted. The equivalent to over 2 billion gallons. This is a surface area of about 33 acres.

The eruption is confined to the summit caldera, and there is no direct threat to surrounding populations at this time.

The Hawaiian Volcano Observatory says high levels of volcanic gas, rockfalls, explosions, and volcanic glass particles are the primary hazards of concern regarding this new activity.

Large amounts of volcanic gas are continuously released during these eruptions. The gas is primarily water vapor, carbon dioxide, and sulfur dioxide, or SO2.

The amount of sulfur dioxide being released from the volcano is estimated at around 30,000 tonnes/day.

As SO2 is released, it reacts in the atmosphere with oxygen, sunlight, moisture, and other gases. Within hours to days, it converts to fine particles, which scatter sunlight and cause the visible haze known as vog.

As island residents know, vog creates the potential for airborne health hazards. It can also damage agricultural crops and other plants, and affect livestock operations.

The Hawaii Health Department has already issued a notice, saying areas downwind of the summit such, as Pahala and Ocean View, have experienced increased sulfur dioxide levels. This may cause problems with respiratory health, especially in sensitive individuals.

Scientists also say that rockfalls and minor explosions can occur suddenly and without warning. Thats one reason the Kīlauea caldera rim has been closed to the public since late 2007.

Hawaii Volcanoes National Park officials say all areas in the park that were open to the public before the new eruption, remain open.

The National Park Service is reminding the public to stay safe by following these precautions:

The park says stay on marked trails and overlooks, and avoid earth cracks and cliff edges. Do not enter closed areas. The volcanic gases billowing out the crater can be a danger to everyone, especially people with heart or respiratory problems, infants, young children and pregnant women. At 4,000 feet (1,219 meters), the summit of Kīlauea can be chilly at any time. Bring a rain jacket, wear long pants and closed-toe shoes. Maintain social distance of six feet from others and wear a mask to reduce the spread of COVID-19.

HVO says Kilauea updates will be now be issued daily. Should volcanic activity change significantly, a new Volcanic Activity Notice will be issued.