HAWAIʻI VOLCANOES NATIONAL PARK - Today, the Hawaiian Volcano Observatory noted intermittent spattering from the west vents in the summit crater, and SO2 rates were the lowest recorded since the eruption began. 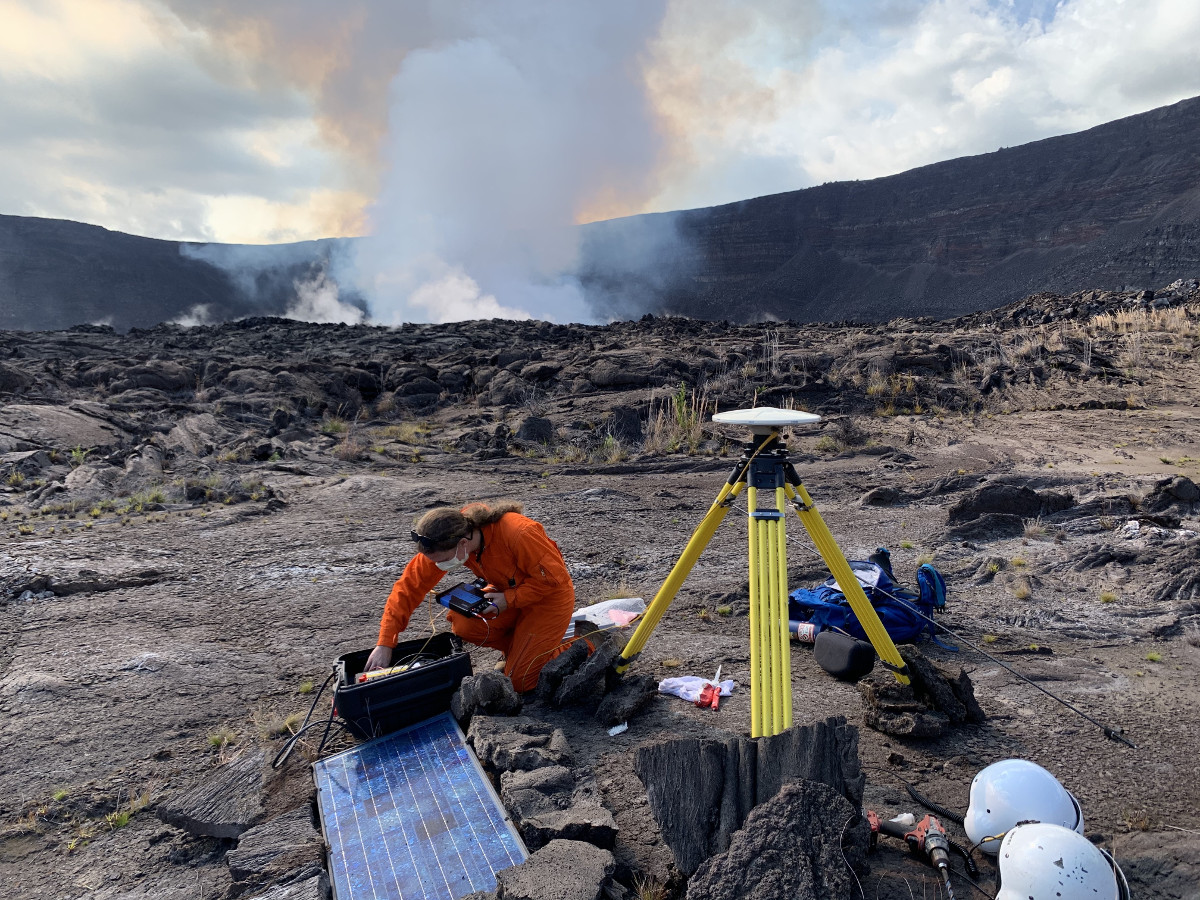 This photo, taken on December 22, 2020, shows an HVO geophysicist installing a new Global Positioning System (GPS) station on the portion of Kīlauea’s caldera that down-dropped during the 2018 summit collapse. The summit eruption plume is visible in the background. USGS photo by K. Kamibayashi.

Kīlauea Volcano is still erupting at the summit caldera, but with what appears to be reduced vigor in recent days. Today, the Hawaiian Volcano Observatory noted intermittent spattering from the west vents in the summit crater. All other vents are quiet. A few days ago, lava appeared to be draining into the inactive north vent.

As of 4 a.m. this morning, the lava lake was measured at 587 to 591 feet deep. This graph plots the depth of the lake since the start of the eruption.

Sulfur dioxide emission rates were also measured at about 3,300 tonnes/day on Monday. That’s the lowest measurement since the eruption began. The reading is still considered elevated, but scientists say its in the range that was common for the pre-2018 lava lake.

Summit tiltmeters continued to record weak inflationary tilt until about 4 pm on Monday, when it switched to weak deflationary tilt. Seismicity remained elevated but stable.

A series of recent HVO videos shows the decreasing activity at the west vent. This was how the vent appeared two nights ago, when strombolian bursts and lava cascades were recorded during the night. Lava was plunging into the lava lake at multiple locations, from as high as 130 feet.

This time-lapse video, recorded over a three hour period on Monday, shows the diminishing activity in the lava channel on the right.

Scientists reported the channel had narrowed, and the flow had become more sluggish, with occasional pulses in activity. Activity also picked up slightly in the lava channel on the left, which is partially covered by a lava roof. HVO says a small whirlpool is visible at the base of the lava channels, in the lava lake.

This video was recorded early Tuesday morning. It shows lava is still erupting from the right channel of the west fissure. HVO says laser rangefinder measurements indicate that the opening is 13 to 20 feet wide.

All current activity is confined to the summit. HVO says there is no seismic or deformation data to indicate that magma is moving into either of Kīlauea’s rift zones. Scientists say the data shows slight contraction in the upper portion of the East Rift Zone.

Answering questions from the public over Twitter on Tuesday, the USGS said the contraction of the East Rift Zone and recent inflation at summit is opposite of dramatic events of 2018.

The scientists said it’s possible that magma from the contracting portion of the East Rift Zone is flowing back to the summit reservoirs. They said the signal is small and preliminary modeling shows it to be just a small amount of magma returning to the summit.

Recent summit inflation could be because magma from the upper East Rift Zone is flowing to summit area. The scientists also said it could be due to a decrease in the amount of lava erupted from the western fissure, and a drainback of lava into north vent.

Scientists say they have collected tephra samples, and will be doing an analysis to see if they can track where magma has been. For example, if magma has gone into the upper East Rift Zone and has now returned.

HVO scientists say they will continue to monitor the ongoing Kīlauea summit eruption from within an area of Hawai‘i Volcanoes National Park that remains closed to the public for safety reasons. They are standing on a portion of the Crater Rim Drive (corrected) that collapsed into the caldera as it dropped down in two years ago. The team is equipped with a range of specialized safety gear and personal protective equipment, and will continue to issue daily updates and additional messages as needed.