HAWAIʻI VOLCANOES NATIONAL PARK - Scientists say there have been no major changes in recent days in the week-long eruption or in the lava level.

This photo shows an HVO scientist making observations of Kīlauea’s summit lava lake, with Mauna Loa in the background. HVO scientists have been monitoring the eruption from within an area of Hawai‘i Volcanoes National Park that remains closed to the public for safety reasons. No major changes were observed at the eruption site today: the west vent remains active (though slightly diminished in vigor) and continues to feed the lava lake. USGS photo by B. Carr.

Overnight at Kilauea Volcano, lava continued to cascade from the west vent, feeding the new lava-lake at the summit caldera.

There have been no major changes in the week-long eruption. The lava level remains roughly the same. Hawaiian Volcano Observatory field crews measured the lava lake as 588 feet deep on Monday, which is about the same as it was yesterday.

Two or three channels of lava are erupting from the crater wall, plunging about 130 feet down into the surface of the molten lake. As the cascades hit the surface, the lake can be seen sloshing around and pulling cooled pieces of crust under the surface.

As they have since the eruption began, scientists kept an eye on the activity from the crater rim. They are using this laser range finder to make measurements.

They captured this sunrise photo this morning, showing the voggy haze that persist within Hawai‘i Volcanoes National Park. In this image, portions of Crater Rim Drive that down-dropped during Kīlauea’s 2018 collapse are visible in the lower left. This area remains closed to the public due to hazardous conditions.

After daybreak, HVO scientists took to the air to collect visual and thermal imagery in order to map the ongoing activity. Over the past day, the island of cooler, solidified lava floating in the lava lake began drifting back to the east. Scientists say the island is about 740 feet in length and 360 feet wide. Measurements taken Sunday evening show the island’s surface was about 20 feet above the lava lake. 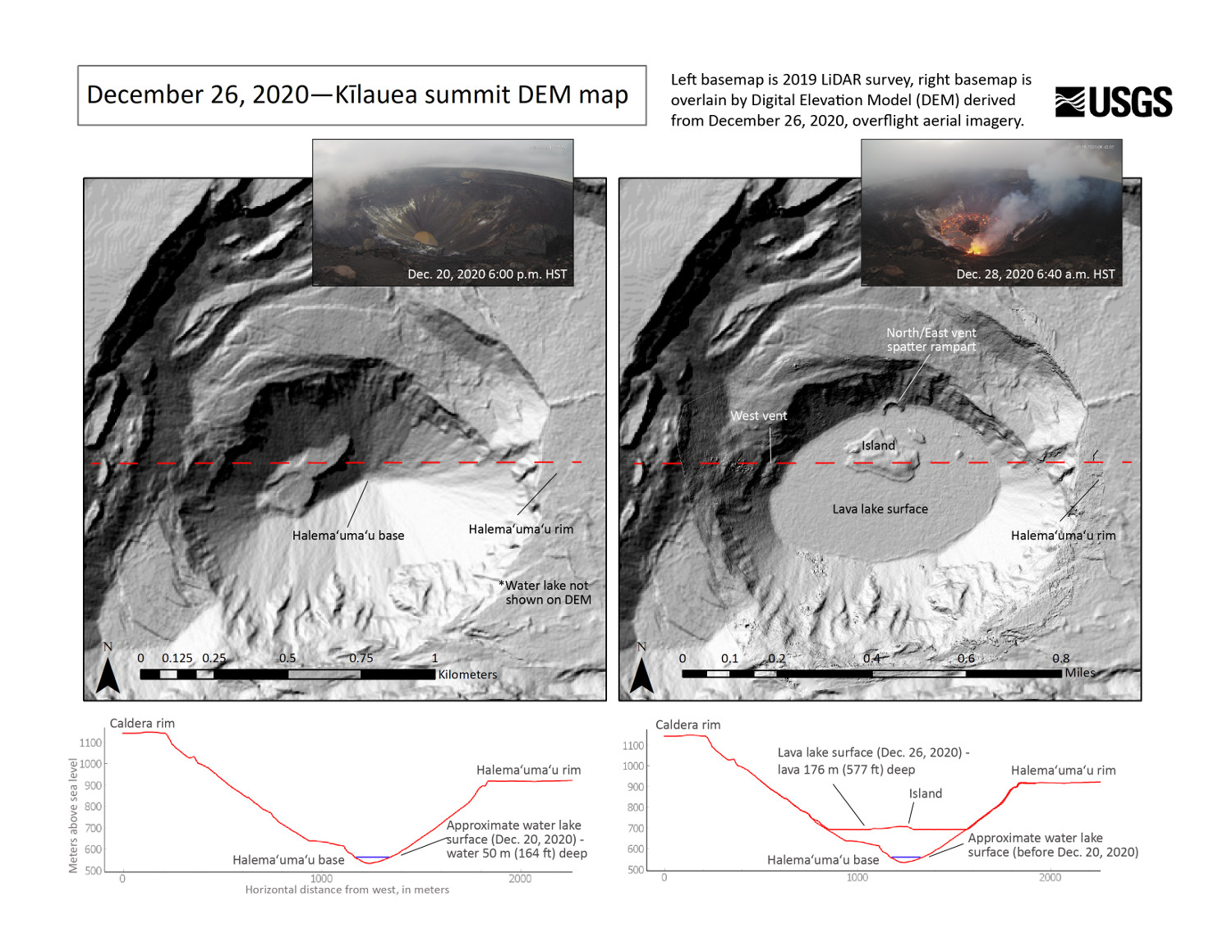 This graphic depicts the changes to Kīlauea Volcano’s summit resulting from the eruption that began on December 20, 2020. Pre-eruption topography of Halema’uma’u crater, collected in 2019, is shown on the left and compared to the topography at the summit on December 26, 2020. The models show that the deepest portion of Halema’uma’u at Kīlauea Volcano’s summit has been filled with a lava lake. The eruptive vents, both active and inactive, are evident on the wall of Halema’uma’u, as are the “islands” that migrate on the lava lake surface. The December 26, 2020, Digital Elevation Model (DEM) was created from aerial imagery collected that day during an overflight of Kīlauea Volcano’s summit at approximately 10:00 a.m. HST. Since then, the lava lake level has not varied greatly. As of 11:30 a.m. HST on December 28, 2020, the lava lake level is 179 m (588 ft) deep. December 26 DEM by B. Carr. Graphic by K. Mulliken.

The island appears in this new HVO graphic, which offers a side-by-side comparison of the Kilauea summit before and after the December 20 eruption. The new eruptive vents are both evident on the newer model.

Sulfur dioxide emission rates were last measured at about 5,500 tonnes per day. Its a big decrease from the emission rates measured at the start of the eruption, but they are still considered elevated. Summit tiltmeters today continued to record weak inflationary tilt. Seismicity remained elevated but stable, with steady elevated tremor and a few minor earthquakes.

The eruption remains confined to the summit caldera, and scientists say there is no seismic or deformation data to indicate that magma is moving into either of Kīlauea’s rift zones. HVO will continue to maintain visual surveillance of the volcanic activity and says it will issue additional messages as needed.