A synthesized voice was utilized in the narration for this story. Video recorded by David Corrigan, and provided by the Hawaiʻi DLNR and Kanaka Garden advocate Donna Grabow.

HILO, Hawaiʻi - The Kanaka Garden has returned to Wailoa River State Recreation Area, and state law enforcement is already ordering those involved to cease and desist. 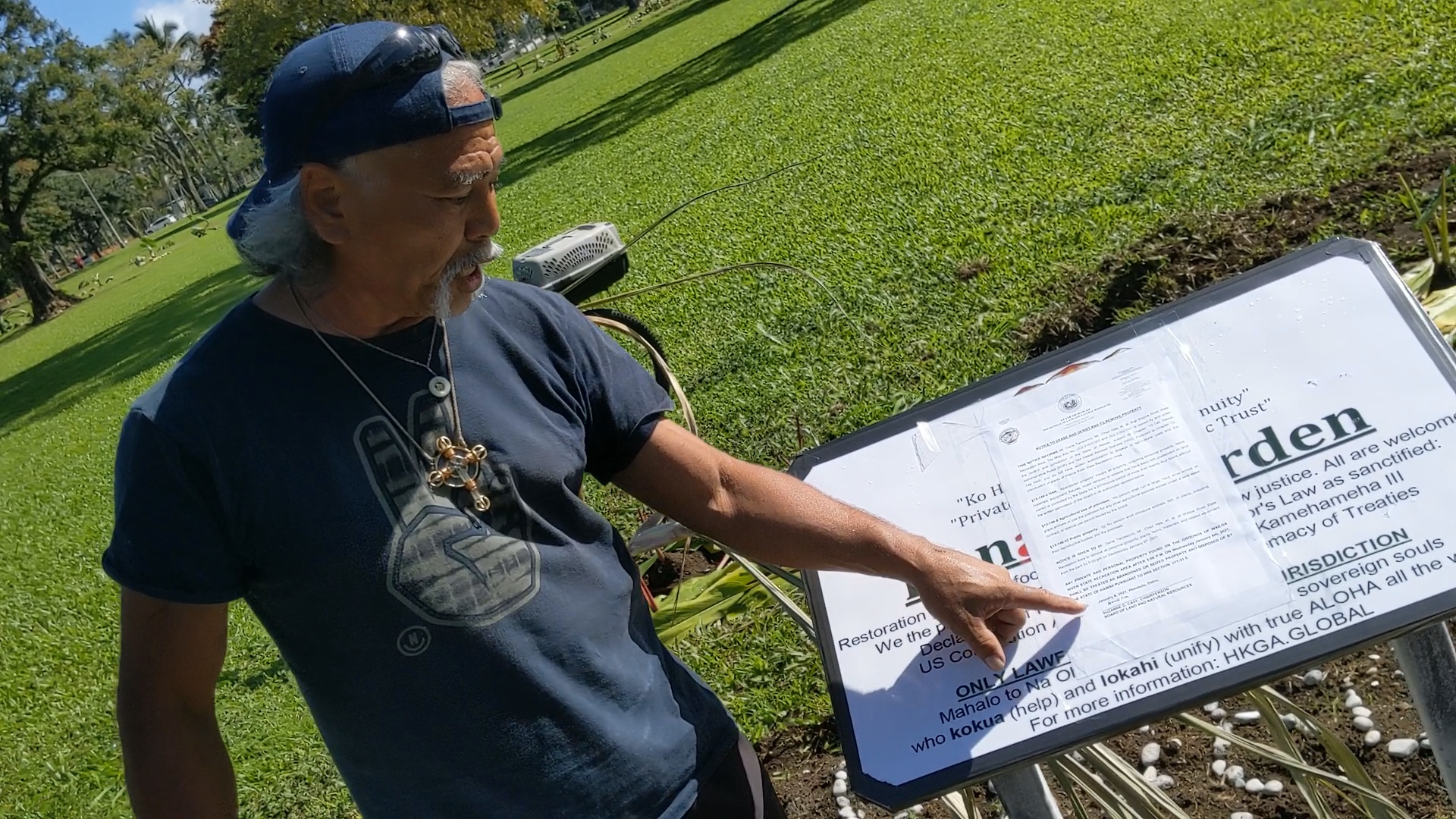 The following is a transcript for the video article above. This is partial transcript that will be updated to a full transcript before this afternoon.

The Kanaka Garden has returned to Wailoa, and state law enforcement is already ordering those involved to cease and desist.

The community garden, located on the lawn fronting the landmark King Kamehameha statue along the Hilo Bayfront, has reappeared in recent days.

A variety of canoe plants are now in the ground, and are being tended to by a group working from a nearby tent.

The Kanaka Garden first emerged in 2013, when kalo was planted in a smaller around the statue, in defiance of state laws.

GENE TAMASHIRO (2013):  This is the Kanaka Garden, and kanaka not necessarily meaning koko blood, but kanaka in Hawaiian is actually ‘true human being’.

One of the main organizers was Gene Tamashiro, who for years has challenged the legitimacy of the state to enforce such rules on the land. The Wailoa River State Recreation Area falls under State Department of Land and Natural Resources jurisdiction.

TAMASHIRO (2013):  The United States does not have lawful jurisdiction in Hawaiʻi to create a territory and then again to create the State of Hawaii because there is no lawful treaty of annexation.

The events of 2013 ended with removal of the plantings by state law enforcement, and the gathering was scattered. Until 8 years later.

As of January 5, 2021, a much larger area has been planted. A man named Aero showed us the work that has been done.

AERO: “The entire area from downtown over to the airport was a flood plain with kalo with fish ponds.”

For Aero, who said he is houseless and normally lives in the area of lower Puna, the resurrected garden represents opportunity to feed the people.

TAMASHIRO: “But really what we want to do is we want to return natural law justice back to Hawaiʻi.”

Gene Tamashiro was also back, helping to organize the renewed effort.

TAMASHIRO: “Because the whole world is under literal lockdown – hello, gentlemen – right? We’re in lockdown, and we need full disclosure and substantive due process to somebody bring the evidence that this lockdown is based on actual true science.”

TAMASHIRO: “Largely because of John’s article, he put in his article at the very last paragraph, the bottom line of this controversy. On this soil, any controversy of any ʻaina, any land, the question to ask in law. Who has superior title? There you go. So, who’s supposed to answer that for the State Attorney General Claire Connors, head of DLNR Suzanne Case? Now, both those wahines are working for the occupying corporation. I’ve been serving paperwork to these guys for years. Have they ever responded and put in writing with their autograph? Here’s the evidence Gene. Here’s the evidence of our true title? All they do, if they do anything, just like the judges, is they say this was already adjudicated by the Supreme Court. Okay, so where is the evidence that anybody adjudicates anything.”

As Tamashiro spoke to the media, officers with the State DLNR Division of Conservation and Resources Enforcement arrived on the scene.

This footage was recorded by the DLNR and released to the public later that day.

The officers got to work, notifying the participants to cease and desist by 5 pm on Wednesday, January 6th.

As officers attached their notice to the Kanaka Garden sign, Tamashiro approached. 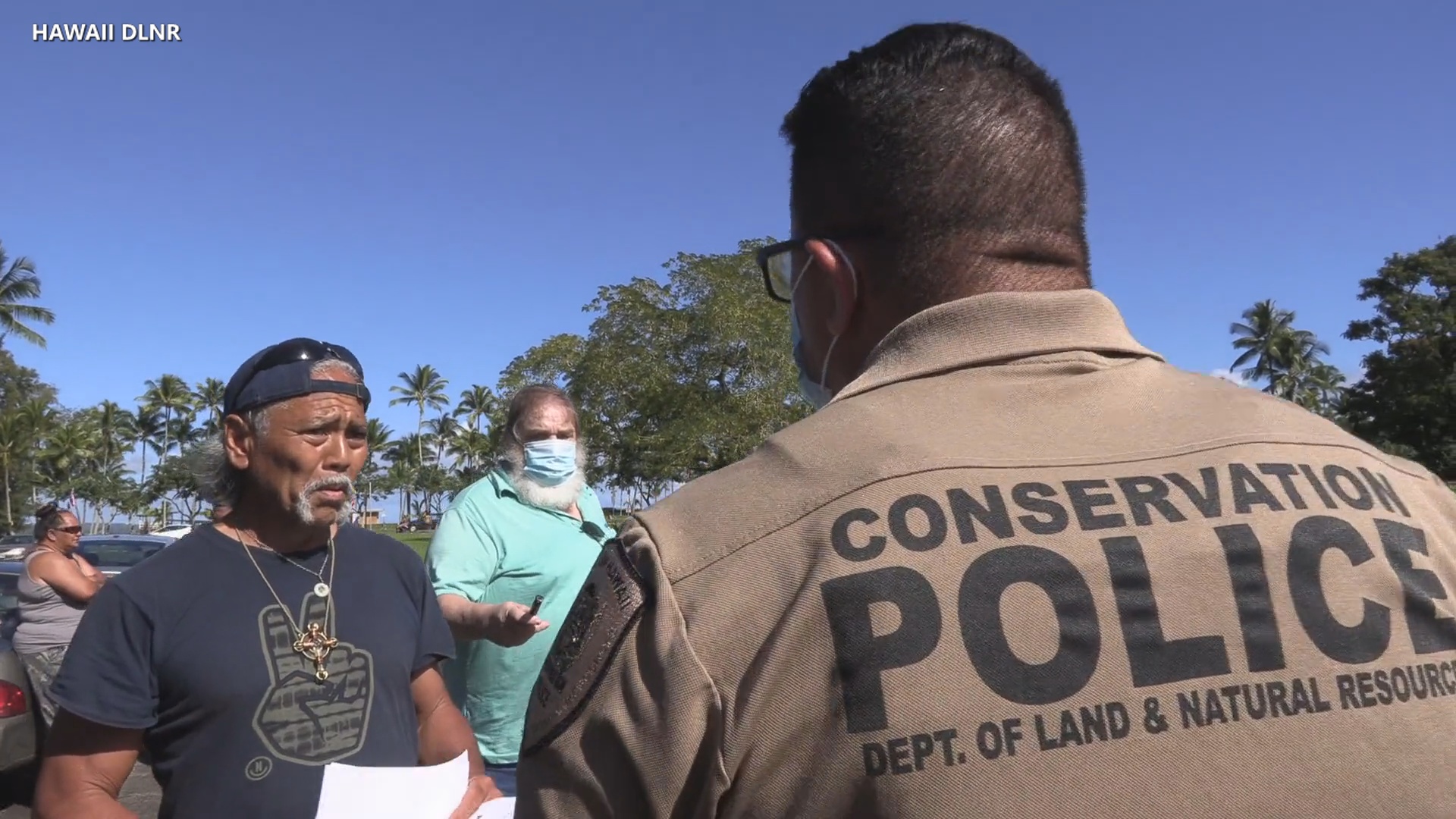 TAMASHIRO: “This is their notice, and so she – with her autograph – has entered into the law with our autograph, our signatures. All in the public record. So, if these guys obey her and they don’t make sure she brings forward facts and evidence to prove this ʻaina is not crown land, if she can bring evidence that this ʻaina belongs to the State of Hawaiʻi, we will all go home!”

In a later news release, a DLNR official said the recreation area and all other State Parks belong to all of Hawai‘i for the enjoyment by residents and visitors. The department noted that the participants don’t have any permits for planting or for erecting signs at Wailoa, and that the Cease and Desist order requires the group to remove tents and other camping gear, or the materials will be considered abandoned property.