A synthesized voice was utilized in the narration for this story. Video and photos are from the USGS Hawaiian Volcano Observatory, and Tropical Visions Video.

HAWAIʻI VOLCANOES NATIONAL PARK - Vents are still active on the northwest side of the crater, feeding into a lava lake which continues to slowly deepen. The lake was measured at 643 feet deep today. 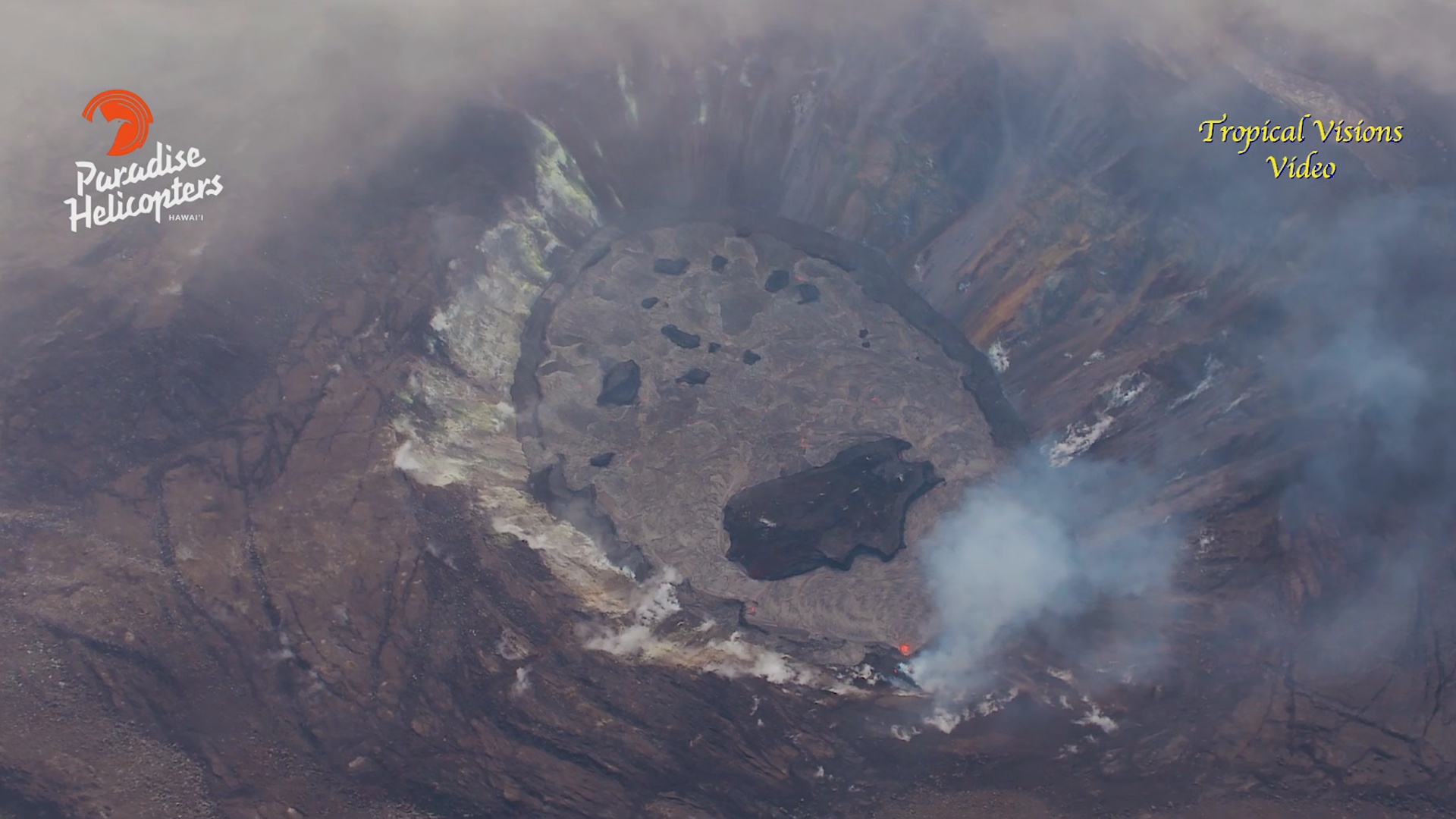 Kilauea continues to erupt at the summit caldera, and the volcano remains at an alert level of Watch.

Vents are still active on the northwest side of the crater, feeding into a lava lake which continues to slowly deepen. The lake was measured at 643 feet deep today.

The US Geological Survey Hawaiian Volcano Observatory noted in a Monday update that the eastern half of the lava lake appears stagnant.

The eastern half measured a few yards shallower and last night appeared to have subsided below its perched rims.

Scientists recently recorded this new video, shown here at an accelerated playback, documenting the crustal foundering and resurfacing at the summit. They say this foundering process has become common in the eastern portion of the lava lake.

HVO says that all smaller, cooler lava islands were stationary over the past day, as if frozen in the eastern stagnant portions of the lake. 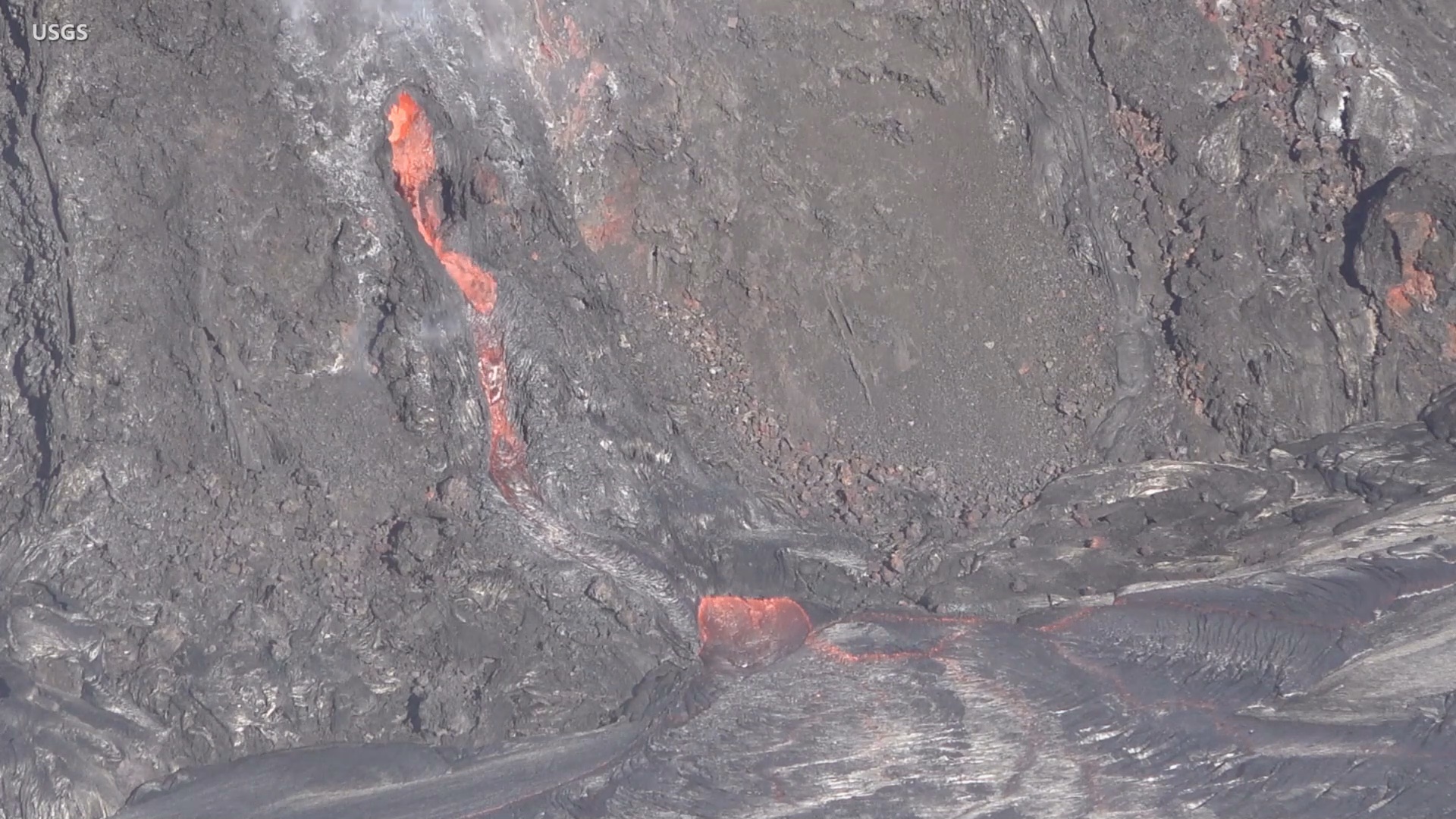 image of the west vent from video by the USGS by Matt Patrick, USGS Hawaiian Volcano Observatory

This HVO video shows activity at the western fissure on January 8. The lava stream appeared weaker than it than several days before, when a dome fountain was active at the base of the flow. On Sunday afternoon, the west vents started to exhibit stronger output. On Monday morning, summit tiltmeters were recording inflationary tilt, and seismicity remained elevated but stable.

Researchers set up temporary seismic instruments around the summit-area, to collect data that will help them learn more about how #magma travels in the shallow magmatic system beneath the volcano.

So far, there is indication that additional magma is currently moving into either of Kīlauea’s rift zones.

Although the majority of the information on the volcanic activity is coming to us from the U.S Geological Survey, there are other eyes on the eruption.

This video was recently recorded during an overflight by Mick Kalber, the man behind Tropical Visions video, who has been documenting Hawaii island eruptions for decades.

Kalber grabbed this footage while aboard a Paradise Helicopter flight a few days ago, which was framed by a rainbow over the caldera.

The dome fountain in the lava lake was still active when this video was taken. Kalber noted that as small as the dome looks in his video, it is actually the size of a house.

Kalber also marveled at the size of the lava lake, which he estimated to be nearly half a mile across.

As of today, sulfur dioxide emissions were measured at some of the lowest rates since the new eruption began. Scientists say they were 2,300 t/d on Sunday, on the low end of the range that was common during the summit eruption in the years preceding the 2018 caldera collapse.

The current activity is not a threat to surrounding communities, but the eruption is not without hazards. HVO says High levels of volcanic gas, rockfalls, explosions, and volcanic glass particles are the primary concerns for the area immediately surrounding the summit.

The sulfur dioxide that is released is also reacting in the atmosphere with oxygen, sunlight, moisture, and other particles, creating a visible haze downwind of Kīlauea, known as vog.

Vog creates the potential for airborne health hazards, can damage agricultural crops and other plants, and affects island livestock.
Scientists also say rockfalls and minor explosions may occur suddenly and without warning. Which is why the Kīlauea caldera rim in Hawaii Volcanoes national park has been closed to the public since 2007.