HAWAIʻI VOLCANOES NATIONAL PARK - The new eruption of Kilauea volcano on Hawaiʻi island nears one-month, and today is showing some changes in the configuration of the active vent at the summit caldera. 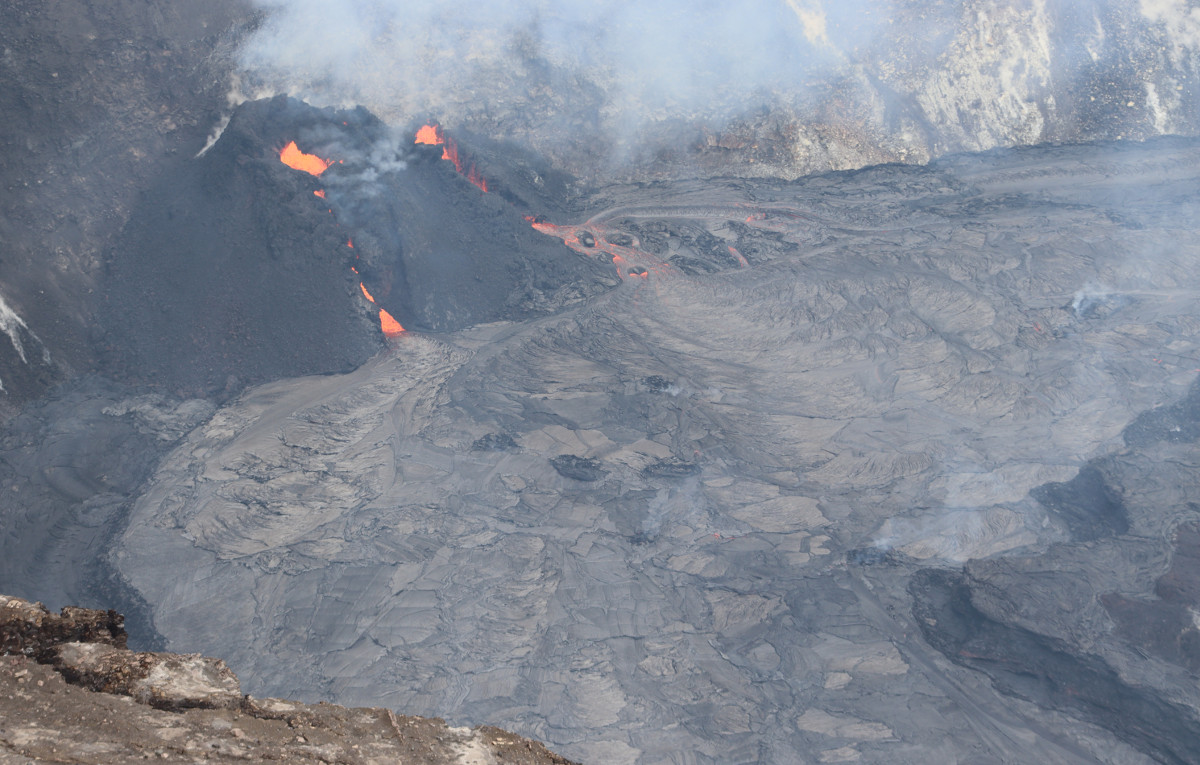 The new eruption of Kilauea volcano on Hawaii island nears one-month, today showing some changes in the configuration of the active vent at the summit caldera.

This video recorded on Monday shows two main vents, active at the western fissure. Both are supplying the lava lake below. Low fountaining was present at each vent.

The U.S Geological Survey’s Hawaiian Volcano Observatory reports that the lake continues to slowly rise. On Monday, it was measured at 202 meters deep, or 663 feet. The lake remains stagnant over its eastern half.

All activity is confined to the summit caldera within Hawaiʻi Volcanoes National Park, and there is no indication that the eruption is migrating down rift.

Summit tiltmeters have recorded neither inflation or deflation over the past few days, and there is little change in the overall eruption
aside from the appearance of the active vent that has occurred over the last few days.

This video shows what the west vent looked like, one week ago. At the time, the fountaining was measured at 5 meters, or 16 feet high, and was visible inside a spatter cone, that had formed around the fissure. Lava was cascading about 35 meters, or 115 feet, down to the molten floor.

A few days later, on January 15, the vigor of the eruption at the fissure appears to increase. Spatter deposits have built up a spatter cone around the vent, and scientists have recorded occasional collapses of the unstable cone rim, which drop large chunks into the vent. The collapses disrupt the fountain and create a more chaotic spray of lava around the cone.

On the evening of January 17, a vent on the north side of the western fissure activated, and seemed to become the dominant vent overnight. Scientists noted that the other vent seemed less energetic.

A close up of the vent area shows that there is actually a third, small vent in the middle that is producing sporadic, weak spattering.

Recent sulfur dioxide emission rate measurements show an increase to about 4,700 tunns per day. These rates are elevated, but far below the emissions at the start of the eruption, which were up over 40,000 t/d.

Scientists continue to closely monitor the eruption, using all available tools. For example, photographs taken during a helicopter overflight on January 7 were used to create this 3D model of the crater.

HVO says this technique is called structure-from-motion photogrammetry. It uses the multiple perspectives captured in dozens of photos to reconstruct the crater shape on a computer. The scientists use models like these to help calculate erupted volume, eruption rate, and measure the size of features in the crater.

The computer-generated fly-through focuses on the main island in the lava lake. The island’s edges were measured at 8 meters, or 26 feet above the lake surface.

All of the islands have been stationary over the past week, frozen in the eastern stagnant portion of the lava lake.

As of today, the whole lava lake – including the stagnant half – is perched at least 1 to 2 meters, or yards, above the crust.

The Hawaiian Volcano Observatory continues to closely monitor Kīlauea’s seismicity, deformation, and gas emissions for any sign of reactivation, and maintains visual surveillance of the summit and the East Rift Zone.

HVO will continue to issue daily updates and additional messages as needed.