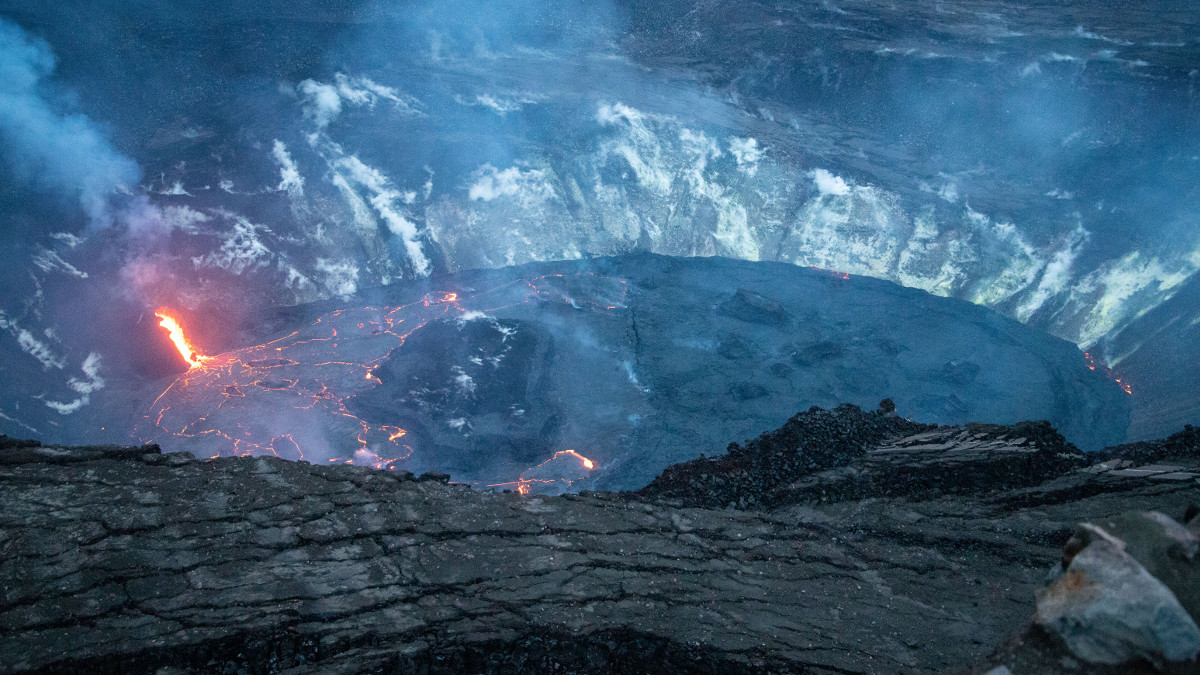 This photo, taken at just after 6 p.m. HST on January 19, shows that the western fissure continues to send lava into Halemʻaumaʻu crater through an open channel into the lava lake. USGS photo by. H. Dietterich.

Left: Magnified view of erupted material, including Pele’s hair and tears, as seen under a microscope (USGS photo by K. Lynn on 12/26/2020). Middle: Zoomed in electron image of the tephra, where greyscale indicates the relative abundance of iron (Fe). Very small (less than 0.1 mm [less than 0.004 inches]) clinopyroxene and plagioclase crystals are labeled next to vesicles (bubbles). Right: Another electron image of tephra that contains small (~0.5 mm [0.2 inches]) olivine crystals with spinels. Greyscale images from the University of Hawai‘i at Mānoa electron microprobe laboratory, used with permission.

(BIVN) – Kīlauea Volcano continues to erupt, with lava activity confined to the summit-area within Halemaʻumaʻu. An active vent on the northwest side of the crater is feeding a lava lake, which was measured at 663 feet deep on the morning of January 21. Sulfur dioxide emission rates remain elevated.

Every rock on Earth is made of up a unique combination of chemical elements, and lavas/tephra formed during Hawaiian eruptions are no exception. What is the geochemistry of Kīlauea’s newest tephra—and how can it help us understand the processes driving the ongoing eruption?

New eruptions at Kīlauea provide a glimpse into what is happening inside the volcano and its magma reservoirs. The recent summit eruption, which began on the night of 20 December 2020, allows us to “see inside” the volcano once more and learn more about where the magma supplying the eruption is coming from.

To think about where magma is stored and how it moves prior to eruption, geologists can measure the chemistry of erupted materials—including quenched lava (glass), minerals, and dissolved gases or gas bubbles. The chemistry can tell us a lot about how hot the magma was at depth, how long it sat inside the volcano prior to arriving at the surface, and how different magmas (old vs. fresh, cooler vs. hotter) might have mixed together before erupting.

So what does Kīlauea’s youngest tephra, which are particles of the magma thrown out of the vent that fall through the air, tell us about this eruption? A simple way to start investigating is to look at how much of the element magnesium (Mg) they contain.

We use Mg (expressed as MgO, or magnesium oxide) measured in glass (for example, quenched lava) to determine how hot a magma is, which indicates how recently it arrived at Kīlauea from its source deep below the Island of Hawai‘i. Higher MgO contents indicate “fresh” hot magmas entering Kilauea’s shallow reservoir shortly prior to eruption, whereas lower MgO contents reflect “older” colder magmas that have been stored within the volcano for longer periods of time.

Shortly after the first tephra erupted on the 20 and 21 of December 2020, the USGS Hawaiian Volcano Observatory (HVO) worked with the electron microprobe lab housed at the University of Hawai‘i at Mānoa to measure MgO in the new quenched lavas. The new tephras have glass MgO contents of approximately 7 weight percent, which is very similar to the composition of Kīlauea’s previous lava lake in 2018. This indicates that the current eruption did not begin with “fresh” hot magma entering Kīlauea’s shallow summit reservoir. Instead, the eruption is likely drawing magma from the same shallow source that fed the 2008–2018 lava lake.

Olivine crystals (the bright green mineral commonly found in Hawaiian lavas) also have a lot of Mg. In olivine the abundance of Mg is expressed as the forsterite content (Fo)—which is a ratio of how much Mg there is compared to the iron (Fe) content [Mg/(Mg+Fe)x100]. Similar to the glasses, higher Mg in olivine (for example, higher Fo) means that the crystals grew from hotter, fresher magmas. If the olivine Fo content is low, it tells us that the crystals grew in a cooler magma. The first olivine crystals to grow in the freshest, hottest magmas rising beneath Kīlauea typically have Fo contents of 88–90.

Kīlauea’s newest olivine crystals, which are typically about 0.5 mm (0.02 inches) in diameter, have relatively low Fo values of 82. This suggests that the crystals grew in relatively cool magmas stored at shallow depths (up to a few km or less than 2 miles below the ground surface) at Kīlauea. The crystals are also chemically homogeneous, meaning that there are no changes in Fo content from the middle to the rim. This tells us that mixing between hotter (higher MgO) and colder (lower MgO) magmas has not occurred recently at Kīlauea’s summit.

Together, the low-MgO glasses and homogeneous, low-Fo olivine indicate that hot, fresh magma has not been erupted. Instead, these compositions tell us that older, “cooler” magma—possibly the left-over magma from 2018—is erupting now at Kīlauea’s summit. HVO scientists are continuing to monitor the chemistry of newly erupted materials, and changes in glass MgO or olivine Fo could help us understand future changes in the eruption.

Please see the HVO website for the revised Volcano Awareness Month schedule, which will be posted later this week.