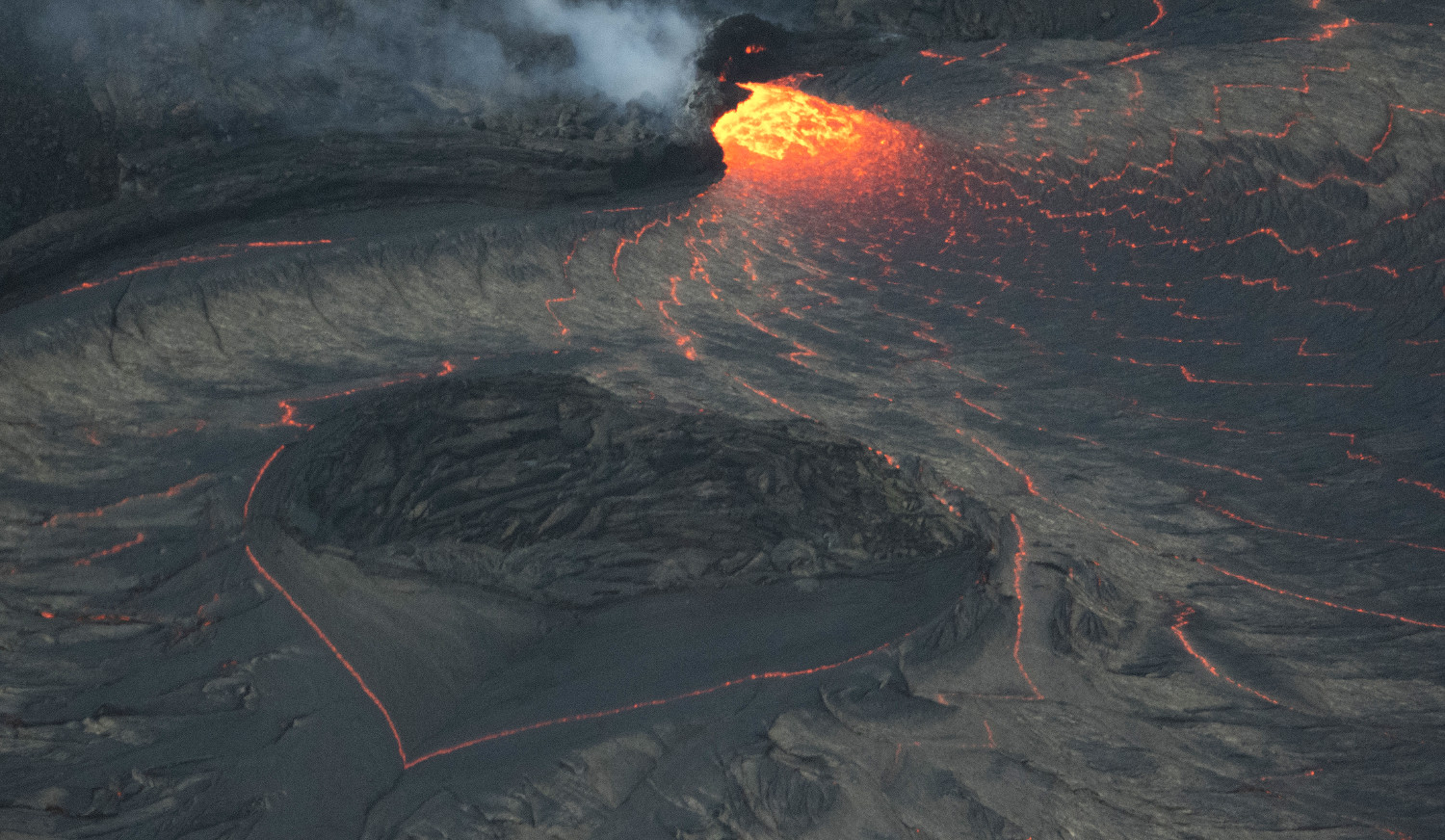 The flow of the lake around a small island, south of the inlet zone, formed a heart-shaped outline in the western portion of the lava lake in Halema‘uma‘u at Kīlauea Volcano's summit. USGS photo by M. Patrick.

HAWAIʻI VOLCANOES NATIONAL PARK - A few days before Valentine's Day, the USGS captured a photo showing a heart-shaped outline on the lava lake, created as lava flowed around a small island, south of the inlet zone. 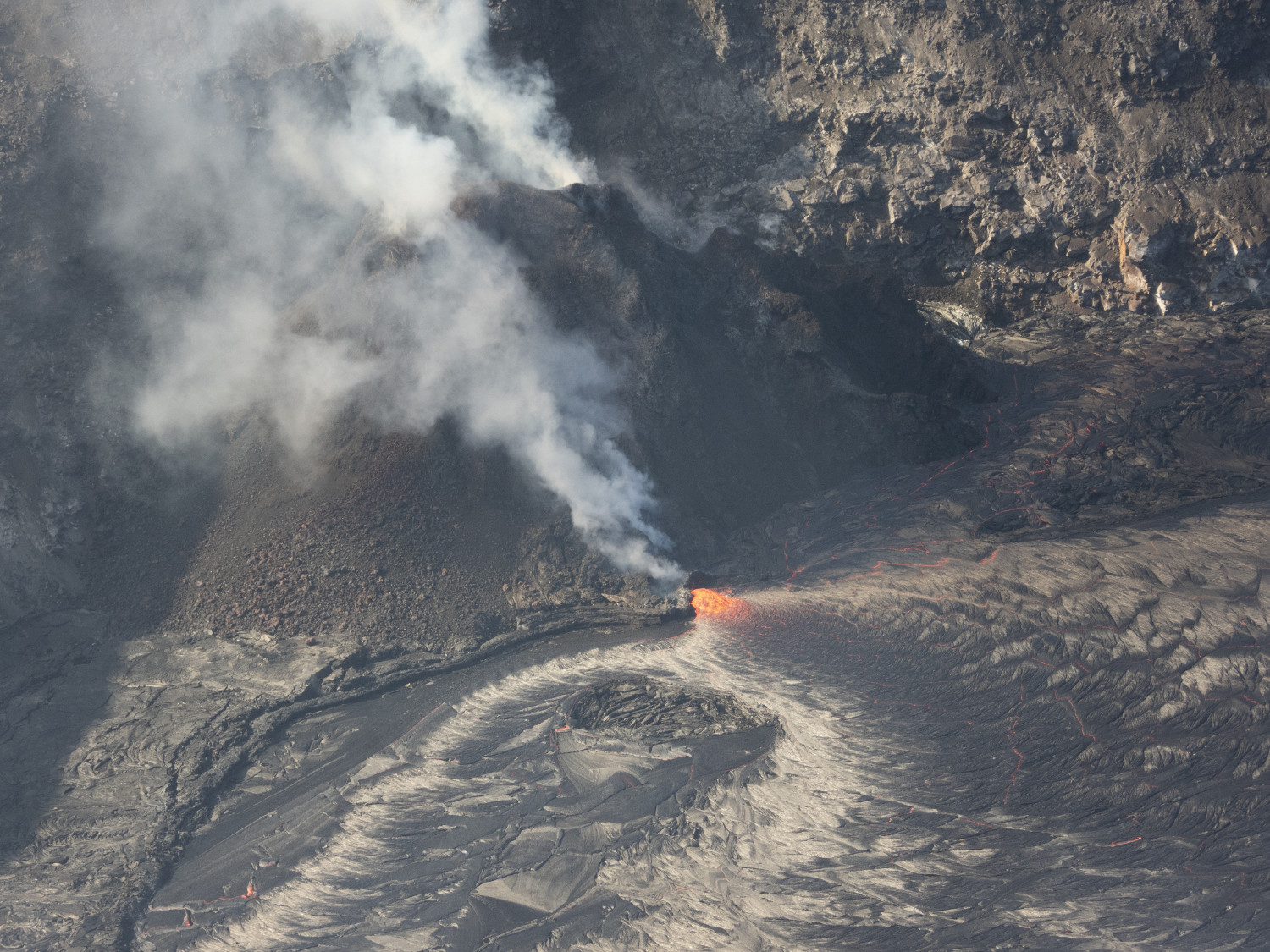 No major changes were observed at the lava lake in Halema‘uma‘u crater during the field visit to Kīlauea Volcano’s summit on Thursday, February 11. The western fissure, shown here, remained active with lava entering the lake at the normal inlet site. The inlet consisted of a small upwelling zone that was raised several meters (yards) above the surrounding lake surface. USGS photo by M. Patrick.

(BIVN) – Kīlauea volcano continues to erupt, and remains at an ORANGE / WATCH alert level. All activity is confined to the summit area, within Halemaʻumaʻu crater.

Monitors show continued inflation, which in recent weeks has correlated to increased vigor of the lava eruption at the active vent.

A few days before Valentine’s Day, USGS geologist Matt Patrick captured a photo showing a heart-shaped outline on the lava lake, created as lava flowed around a small island, south of the inlet zone.

Activity Summary: Kīlauea Volcano is erupting. Lava activity is confined to Halemaʻumaʻu with lava erupting from a vent on the northwest side of the crater. As of the morning of February 14, the lava in the western, active portion of the lake in Halema‘uma‘u was about 216.5 m (711 ft) deep, with the eastern portion of the lava lake solidified at the surface. SO2 emission rates remain elevated.

Summit Observations: The most recent sulfur dioxide emission rate measurements from February 12 are about 1,100 t/d—lower than the emission rates from the pre-2018 lava lake (around 5,000 t/d). The summit tiltmeters show that the inflation of the last few days leveled off beginning yesterday afternoon. Seismicity remains elevated but stable, with elevated tremor and a few minor earthquakes.

East Rift Zone Observations: Geodetic monitors indicate that the upper portion of the East Rift Zone (between the summit and Puʻu ʻŌʻō) contracted while the summit deflated at the onset of this eruption. There is no seismic or deformation data to indicate that additional magma is currently moving into either of Kīlauea’s rift zones. SO2 and H2S emissions from Puʻu ʻŌʻō were below instrumental detection levels when measured on January 7.

Yesterday morning, HVO geologists observed effusion continued at the western fissure, with a small upwelling fountain at the inlet site on the western lake margin. From this small upwelling, the lava rapidly developed a thin crust and flowed outwards towards the east. Over the past day, a few lava spillovers just north of the inlet site have flowed around the northwestern margin of the perched lake.

Active lava remained limited to the western side of the main island. The position of the main island has not changed; as measured on February 12, the south end of the island was 9 m (30 ft) above the lava lake surface, with the highest point at 21 m (69 ft) above the surface. All other islands remain stationary, frozen in the stagnant eastern portion of the lava lake.