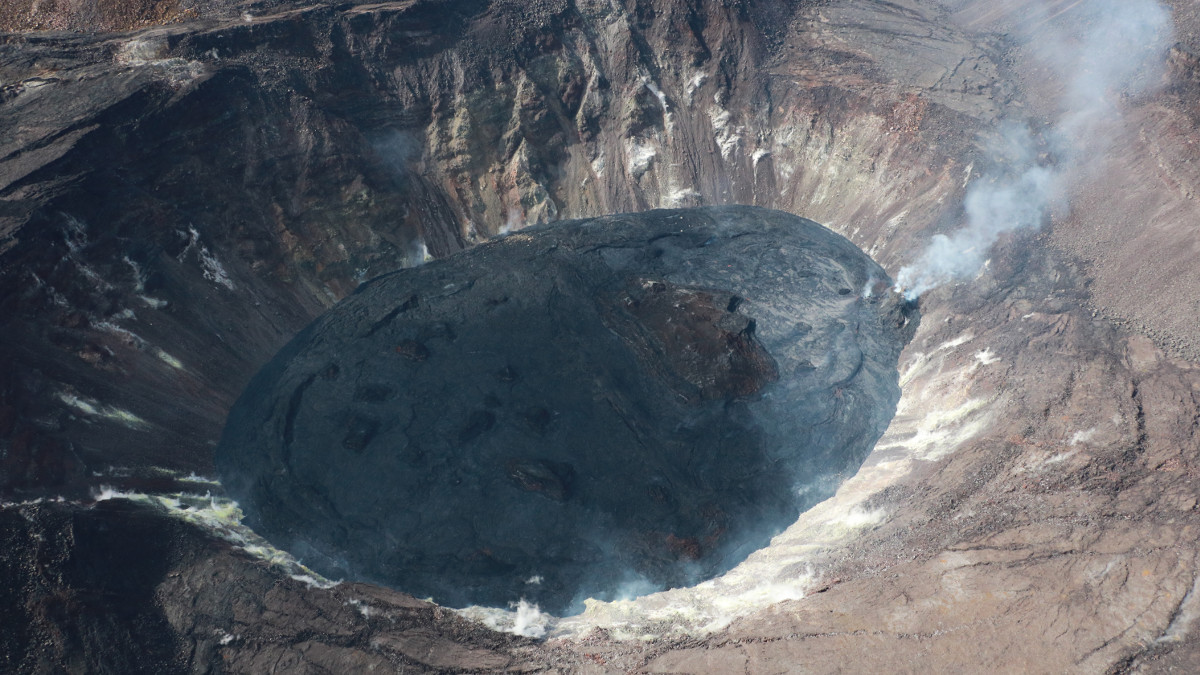 HVO scientists conducted an overflight of Kīlauea's summit the morning of March 4 to document the ongoing eruption. No significant changes were observed—the vent in the northwest wall of Halema‘uma‘u continues to erupt and lava continues to slowly fill the crater. USGS image by K. Mulliken on March 4, 2021.

VOLCANO WATCH: The Earthquakes Preceding The 2020 Eruption Of Kīlauea

HAWAIʻI VOLCANOES NATIONAL PARK - In this week's article, scientists construct a timeline of seismic events leading up to the December 2020 Eruption of Kīlauea Volcano.

Timeline of seismic events leading up to the 2020 Eruption of Kīlauea Volcano, from October to December 2020. USGS graphic.

(BIVN) – The subject of this week’s Volcano Watch article, written by U.S. Geological Survey Hawaiian Volcano Observatory scientists and affiliates, is the earthquake swarms that preceded the December 2020 eruption at the summit of Kīlauea. From the USGS HVO:

Pele returned to the summit of Kīlauea on the evening of December 20, 2020. Incredible video documents the start of the new eruption in Halema‘uma‘u and the dynamic ongoing activity. There was no significant change that suggested lava would erupt again so rapidly, but there were subtle signs of restless behavior around Kīlauea’s summit in the months prior to the eruption.

The exact onset of preceding activity is hard to pin-point, but a notable increase began on October 22. Many earthquakes occurred closely in space and time (a seismic swarm) under the Nāmakanipaio Campground, west of Kīlauea’s summit.

The Nāmakanipaio swarm lasted about 48 hours and produced nearly 300 earthquakes, the largest being a magnitude-3.5. This swarm caused noticeable shaking and caught the attention of residents and scientists alike. However, swarms around the Nāmakanipaio Campground are not uncommon. The most recent swarm, prior to October 2020, happened in March 2019.

Seismicity around Kīlauea summit and the upper East Rift Zone was mostly quiet during the following month with a few minor swarms. The two most active days had about 100 detected events. Another large swarm occurred under the summit and upper East Rift Zone on December 2nd, producing over 200 detected earthquakes and punctuated by a magnitude-3.1 event. The December 17, 2020 Volcano Watch describes this swarm in detail and its relationship with accelerated ground deformation.

This swarm was the first instance of the sequence where restlessness was evident in more than just seismic data, with the latter part of the swarm being accompanied by a rapid increase in ground tilt trends. The excursion in the tilt, along with the migrating seismic activity, indicated a shallow magmatic intrusion. 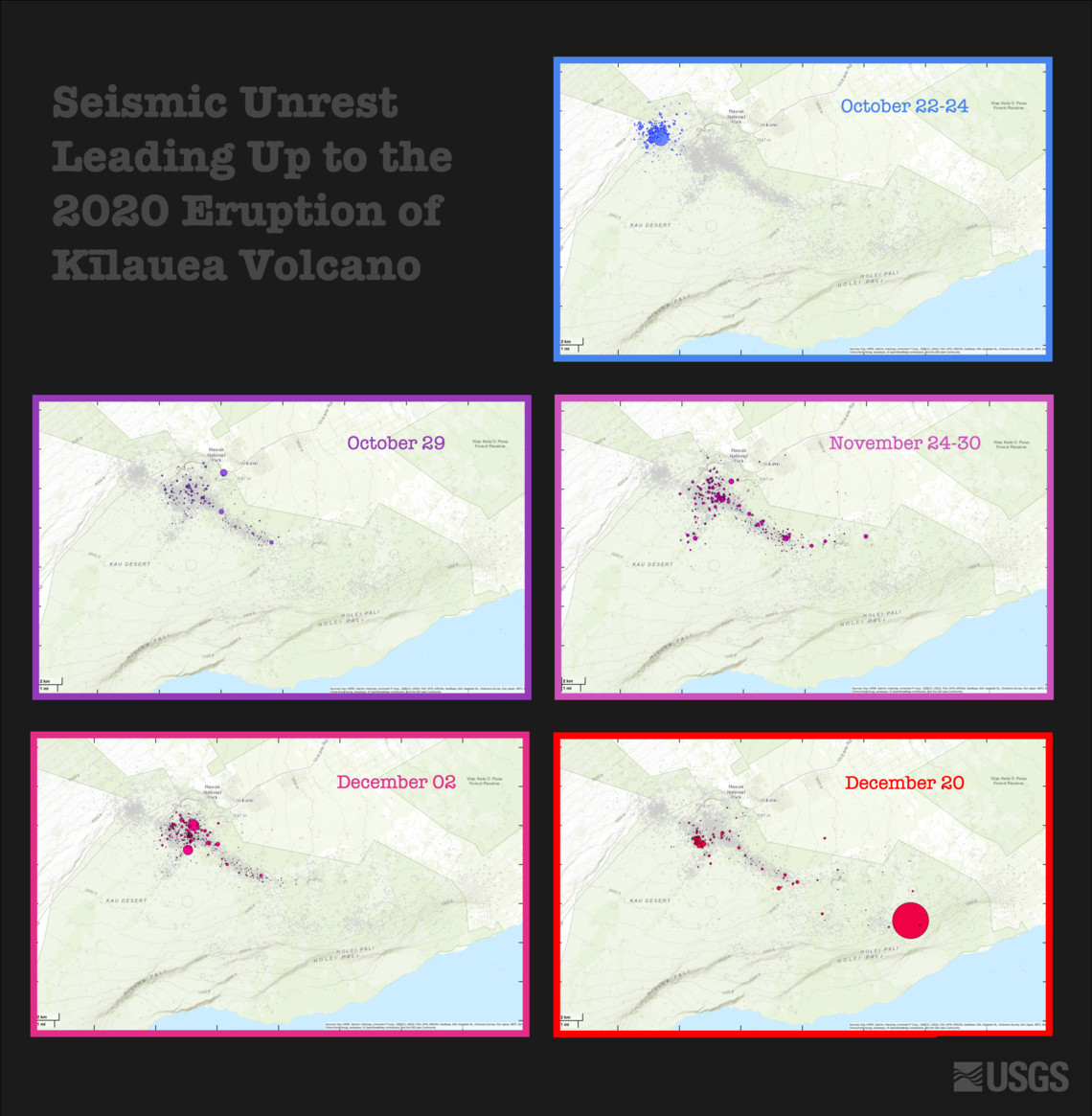 Maps of seismic events leading up to the 2020 Eruption of Kīlauea Volcano, from October to December 2020. Colors are based on the timeline. USGS maps.

Seismologists also noticed increased occurrences of long-period seismic signals after this event, suggesting magma was moving beneath the surface.

Long-period seismic signals occur less often than seismic swarms, but are not uncommon to observe on an active volcano. In this case, the rate of occurrence increased to the point that the USGS Hawaiian Volcano Observatory (HVO) began drafting documents to raise Kīlauea’s Volcano Alert Level.

Before Kīlauea’s Volcano Alert Level could be raised, Pele decided it was time to return to the summit, and on December 20, 2020, she did.

This summit activity began with earthquakes occurring every few minutes starting at depths of about 2 km (about a mile) below the surface. In this case, magma induced these quakes as it made its way to the surface.

The rate of activity continued to rapidly increase. At 9:20 p.m. HST, about ten minutes before lava appeared at the summit, the earthquakes began occurring so rapidly that we could not tell when one event was ending and another started. The summit was going ‘bonkers’ as one seismologist described it.

Lava broke the surface at about 9:30 p.m. HST, but the rapidly-repeating earthquakes continued over the next forty minutes as new summit vents opened and the pathway of magma became fully established.

At about 10:10 p.m. HST, stations around Kīlauea summit no longer showed any earthquake activity. Seismometers showed only a continuous, low frequency tremor signal caused by magma flowing through an open conduit.

The seismic quiet was interrupted briefly by a magnitude-4.4 earthquake on the south flank of Kīlauea. The south flank commonly produces large events in response to magmatic pressure changes at Kīlauea Volcano, as mentioned in the February 4, 2021 Volcano Watch.

The eruption within Halema‘uma‘u crater at the summit of Kīlauea continues, along with the associated tremor signal.

Most of the Island of Hawai‘i’s seismicity has remained at background levels throughout the eruption. However, earthquake rates at Kīlauea’s summit and East Rift Zone have significantly decreased following the eruption onset, with average weekly counts falling from about 150 to less than 15.

HVO scientists continue to keep a close eye on Kīlauea and the other volcanoes around the island, always analyzing and interpreting data for any hint of activity that may precede the next eruption, wherever it may be.