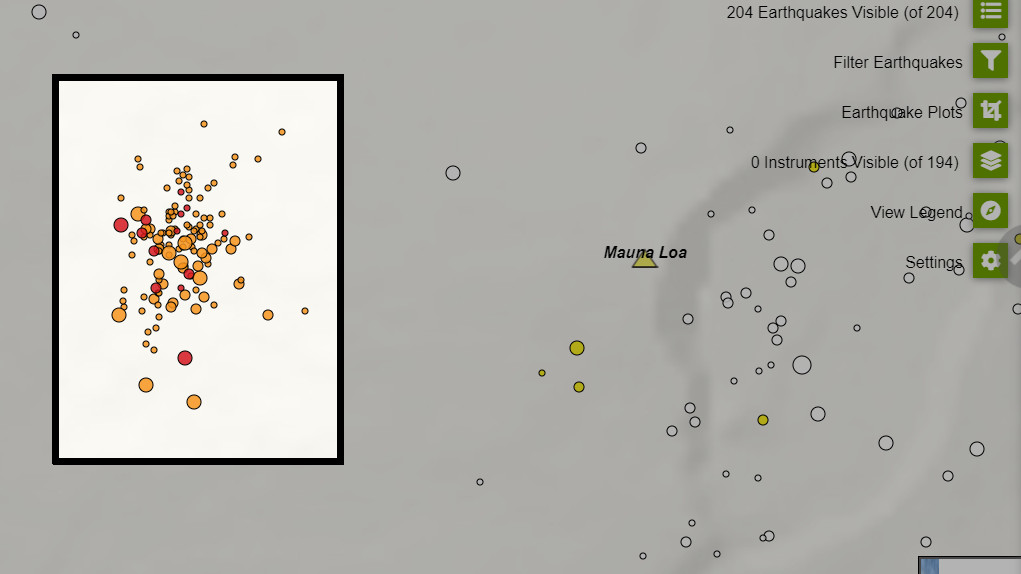 Graphic from USGS map, annotated by BIVN to show the location of the swarm to the west of the Mokuʻāweoweo summit caldera. Red circles indicate an earthquake that occurred within the last two hours at the time the map was produced (approx. 3:30 p.m. HST on Tuesday). Orange circles show earthquakes that occurred in the last two days.

HAWAIʻI ISLAND - Mauna Loa Volcano is not erupting. The earthquake swarm is located on the west flank of the volcano. 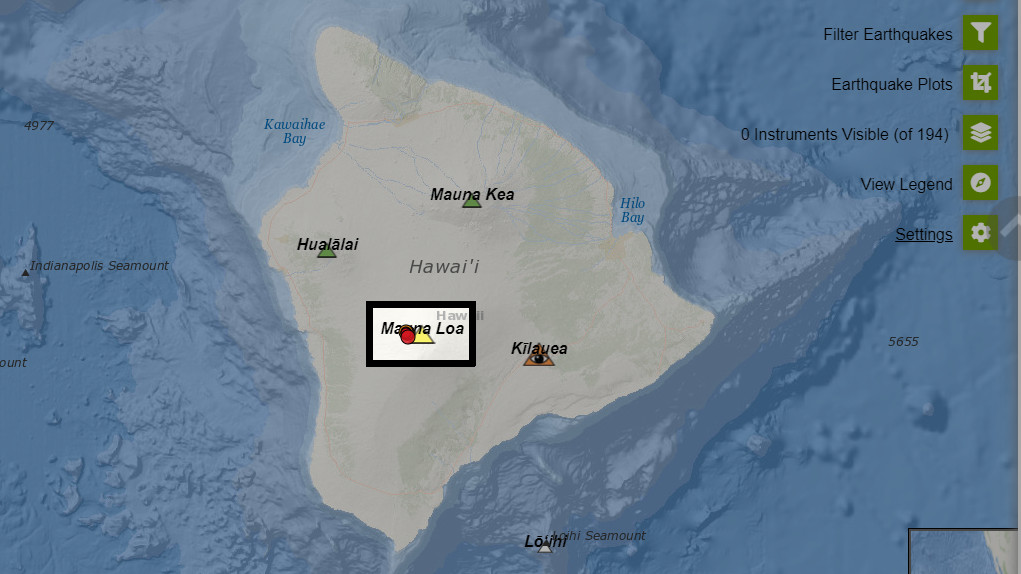 Graphic from USGS map, annotated by BIVN to show the location of the swarm on Mauna Loa.

(BIVN) – A small earthquake swarm is occurring on the west flank of Mauna Loa volcano on Hawaiʻi island.

Mauna Loa Volcano is not erupting. Scientists say rates of deformation and seismicity at the summit remain slightly elevated and above long-term background levels.

A swarm of earthquakes, that began on March 29, 2021, at 2:30 a.m. HST is occurring beneath the northwest flank of Mauna Loa. Mauna Loa is not erupting and other monitoring data streams currently show no signs of increased activity within the past day.

Beginning at 2:30 a.m. HST on March 29, 2021, the U.S. Geological Survey’s Hawaiian Volcano Observatory (HVO) has recorded over 130 earthquakes beneath the northwest side of Mauna Loa’s summit, about 42 km (26 miles) WNW of Volcano. Most of these earthquakes are occurring in a cluster about 2 km (1 mile) wide and 6–8 km (3.5–5 miles) below the surface.

The largest event in the sequence, so far, was a magnitude-2.7 earthquake, with the bulk of the events being less than magnitude-2. Only one event was reported felt by a resident and was described as weak shaking with a maximum Intensity of II on the Modified Mercalli Intensity Scale.

Clustering of shallow earthquakes in this region does not mean an eruption is imminent. HVO has recorded shallow earthquakes in this area for many decades across several eruptive cycles at both Kīlauea and Mauna Loa. These earthquakes may result from changes in the magma storage system and/or may be part of normal re-adjustments of the volcano due to changing stresses within it. Other monitoring data streams for Mauna Loa and Kīlauea, including ground deformation, gas, and imagery, show no significant changes in activity.

This is the second earthquake swarm on Mauna Loa this month. On March 18, the USGS Hawaiian Volcano Observatory issued an information statement in regards to a small swarm of shallow seismicity beneath the upper Ka‘ōiki seismic zone under Mauna Loa’s southeast flank. Scientists said the earthquakes did not show any signs of magmatic involvement and were “part of normal re-adjustments of the volcano due to changing stresses within it.”

At the time of the March 18 statement, the largest event of the swarm on the southeast flank was a a magnitude-3.5 earthquake.

This story will be updated when new information becomes available.