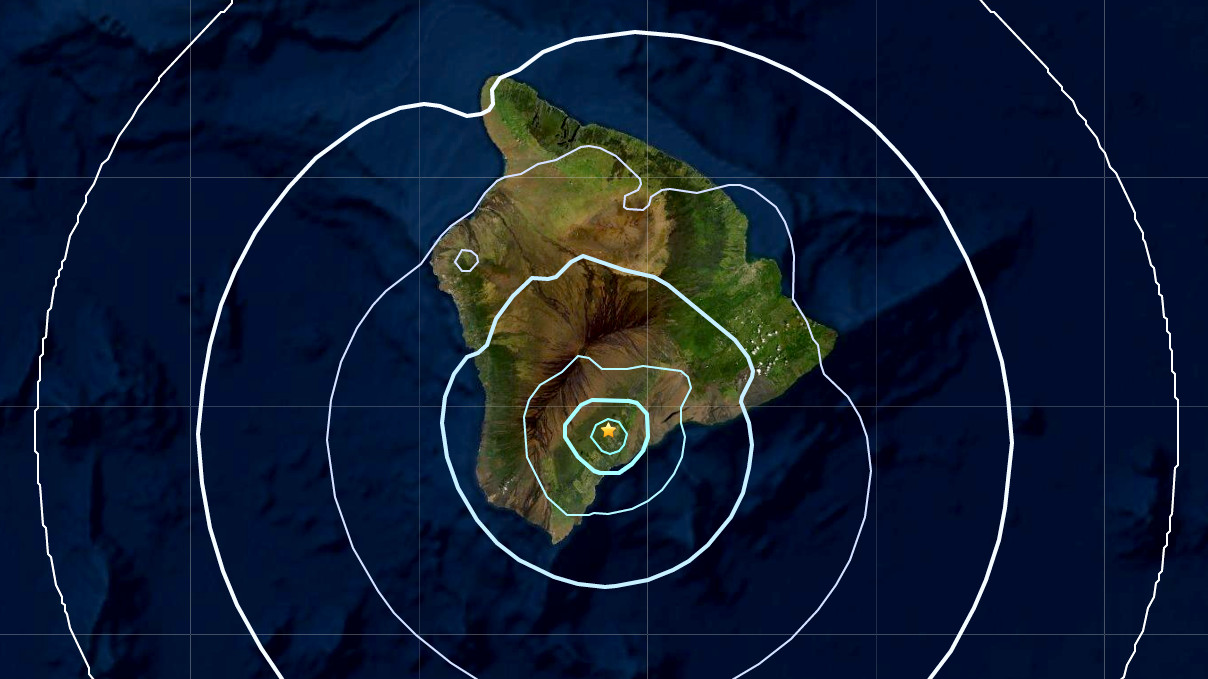 graphic from interactive map by USGS

HAWAIʻI ISLAND - Two earthquakes shook the south flank of Mauna Loa on Saturday, just northwest of the town of Pāhala.

The earthquake occurred a few miles northwest of the town of Pāhala in Kaʻū, and was located at a depth of 5 miles below sea level. The earthquake was stronger and more shallow than the ongoing swarm of deep Pāhala earthquakes, which are located to the southeast and are on average about 20 miles down.

The USGS Hawaiian Volcano Observatory shows that over 100 people reported feeling the earthquake within a half hour of the event.

A Magnitude 3.9 earthquake occurred 14 minutes prior. It was located in the same general area and at the same depth.

The Pacific Tsunami Warning Center reported that the earthquake did not generate a tsunami, although some areas may have experienced shaking.

“As in all earthquakes, be aware of the possibility of after-shocks,” the Hawaiʻi County Civil Defense reported in a radio message. “If the earthquake was strongly felt in your area, precautionary checks should be made for any damages; especially to utility connections of Gas, Water, and Electricity.”

UPDATE – (1:30 p.m.) – Mauna Loa is not erupting. The USGS Hawaiian Volcano Observatory provided this information about the earthquakes:

Both the magnitude-4.3 and magnitude-3.9 earthquakes appear to be slip along vertical faults caused by southeast motion of Mauna Loa’s south flank. Today’s earthquakes are significantly shallower and west of the location of the ongoing seismic swarm under the Pāhala area that began in August 2019.

This does not represent a significant departure from the seismic activity observed over the past year and the Volcano Alert Level for Mauna Loa remains at ADVISORY. Other Mauna Loa monitoring data streams show no significant change in deformation rates or patterns that would indicate increased volcanic hazard at this time.