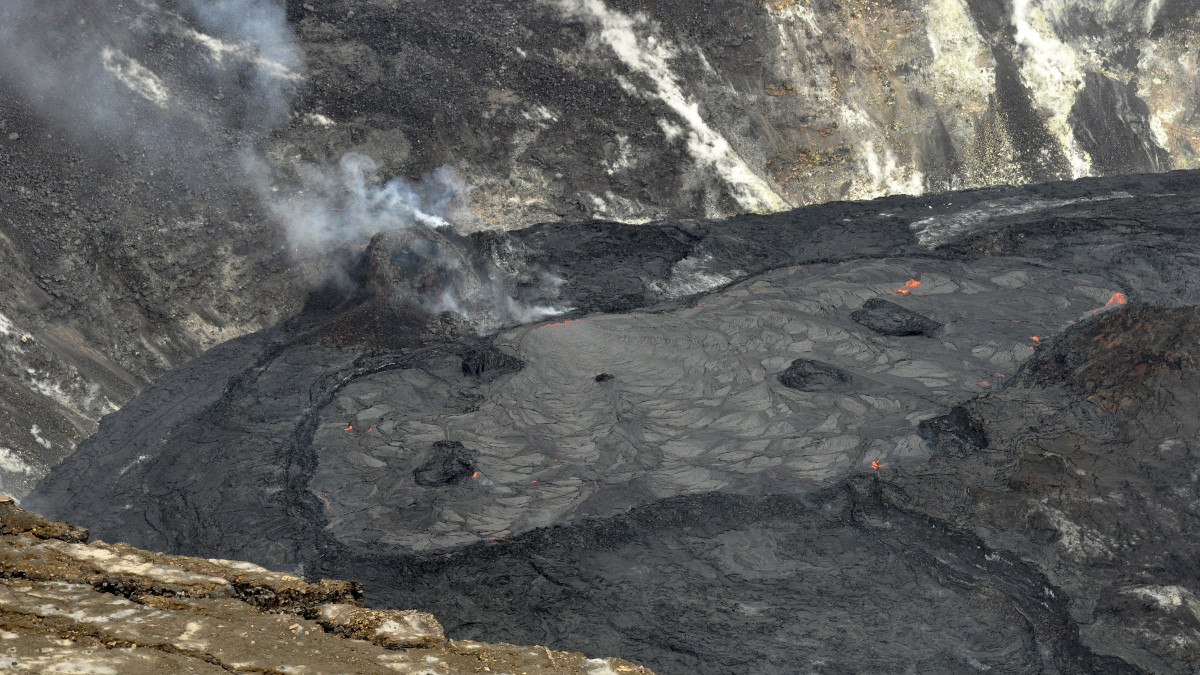 The lava lake in Halema‘uma‘u crater, at the summit of Kīlauea, remains active. USGS photo by N. Deligne on March 29, 2021.

One of the most interesting aspects of the current activity in Halemaʻumaʻu is the occasional oozing of lava around the edges of the entire crater while the lava surface is rising. Has that phenomenon been reported before in any accounts of previous Kīlauea activity?

Halemaʻumaʻu filled and drained numerous times during the nineteenth and early twentieth centuries. One such cycle of rising lava level occurred between 1914 and 1918. Lava levels fluctuated but rose slowly until the 180 m (600 ft) deep pit was filled, finally spilling over the rim in February 1918.

Over the next 21 months, the pit overflowed more than dozen times, and lava erupted from a crack 200 m (650 ft) northeast of the pit. All Halemaʻumaʻu surface activity abruptly ceased on November 28, 1919, when the lava surface dropped 180 m (600 ft) in a single morning, leaving a small triangular lava lake at its bottom.

Thomas Jaggar, founder of the Hawaiian Volcano Observatory, observed much of this activity and afterward noted that the pit walls were covered with “a veneer of glowing matter moulded against the walls of the pit, and … striated vertically.”

He concluded that a cylindrical shell of molten lava (ring dike) surrounding the more solid interior fill of the crater had remained liquid and that its “lubricating action…accounts for the extraordinary quietness and quickness” of draining on November 28th. He also noted that surface features of the new pit floor bore a strong resemblance to the features present before the collapse – the crater fill had dropped like a piston!

The pit began to refill almost immediately, first with an enlarging, rising lava lake, followed by bodily uplift of the floor. Molten lava emerged between the crater wall and the floor material, tilting the edges of the pit floor inward to create a basin in the center of the floor. Lava then flowed from a narrow circular lake between the pit walls and the uplifted floor edges to the central basin, forming a ring-shaped island. Jaggar considered this further evidence of a ring dike.

The eruption in Kīlauea Iki in 1959 provided another opportunity to document lava lake behaviors. The eruption proceeded through 17 episodes of spectacular lava fountains in about 5 weeks, partially filling a pre-existing crater. The entire crust of the lava lake was frequently broken up by what is now called foundering.

“The process … began with molten lava lapping over the leading edge of the crust. Within seconds, or at most a minute, a major crack would form several feet back in the crust parallel to the edge…Then lava would rapidly well up in the major crack…tilting the detached block so that it slipped forward, or was dragged under, into the molten lava. The upwelling lava also lapped over the new leading edge of the old crust setting the stage for another cycle.”

During the eighth episode, scientists on the east edge of the lake noticed that the lake crust was slightly higher in the middle and it primarily foundered around the lower edges as overall lava level rose.

Which process is occurring at Halemaʻumaʻu now? 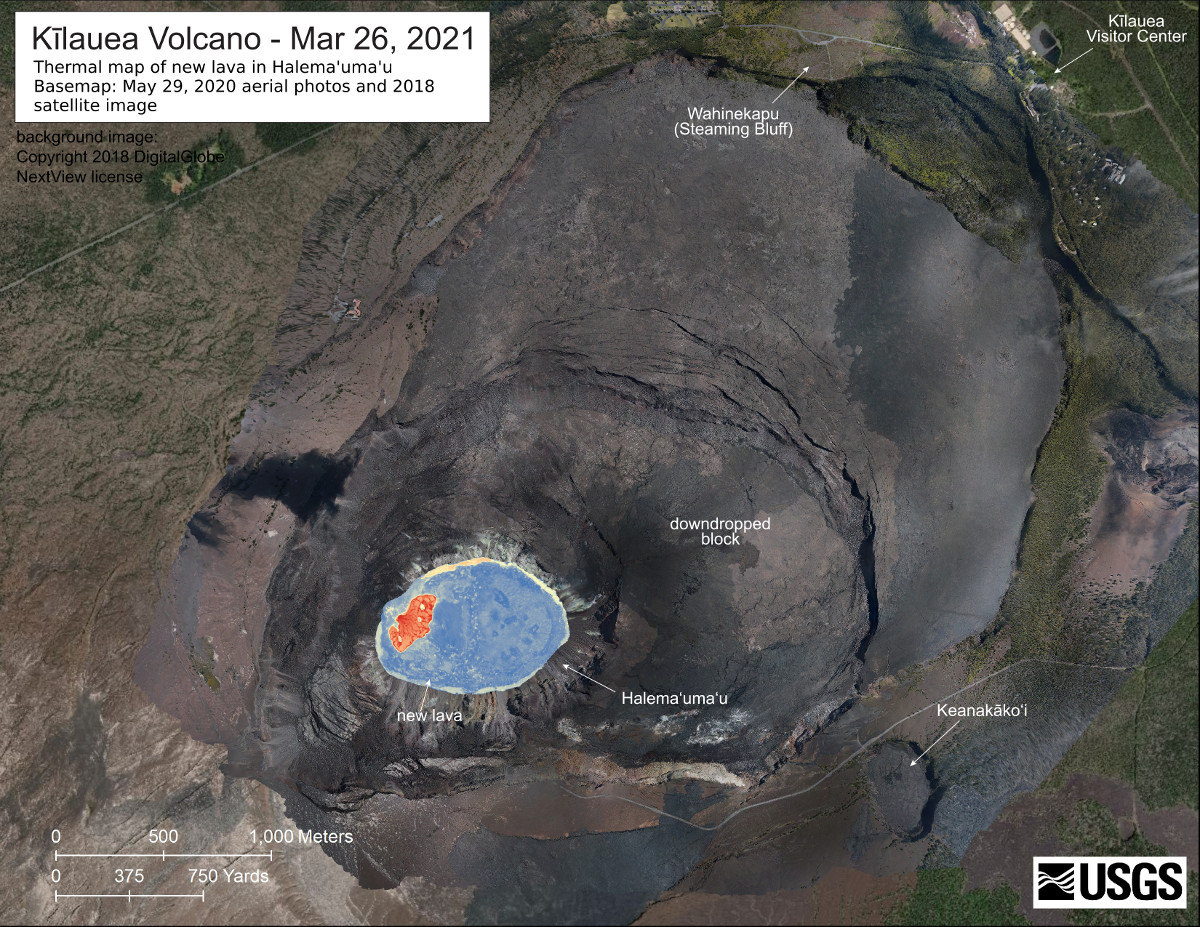 A helicopter overflight on March 26, 2021, at approximately 8 a.m. HST allowed for aerial visual and thermal imagery to be collected of the eruption within Halema‘uma‘u crater at the summit of Kīlauea Volcano. Active surface lava is largely limited to the western side of the lake; the eastern portion of the lake has stagnated and is dominated by cooling, solidified crust. The scale of the thermal map ranges from blue to red, with blue colors indicative of cooler temperatures and red colors indicative of warmer temperatures. USGS map by B. Carr.

The current lake surface shows no sign of being tilted radially inward by a ring dike around its edges as in 1919. Jaggar’s ring dike also produced lava emerging around the entire crater floor, but the current oozing activity usually appears briefly in limited areas cumulatively expanding the lake surface over time. Crust over a lava lake rising in a pit shaped like an inverted funnel may slowly open gaps between the crust edge and the pit walls. The crust around the edges are the newest and thinnest facilitating foundering.

Observations of previous activity at Kīlauea’s lava lakes informs our understanding of ongoing processes in Halemaʻumaʻu’s current lava lake. Continuous observation over time will give us a better sense of all aspects of lava lake mechanics at work today.