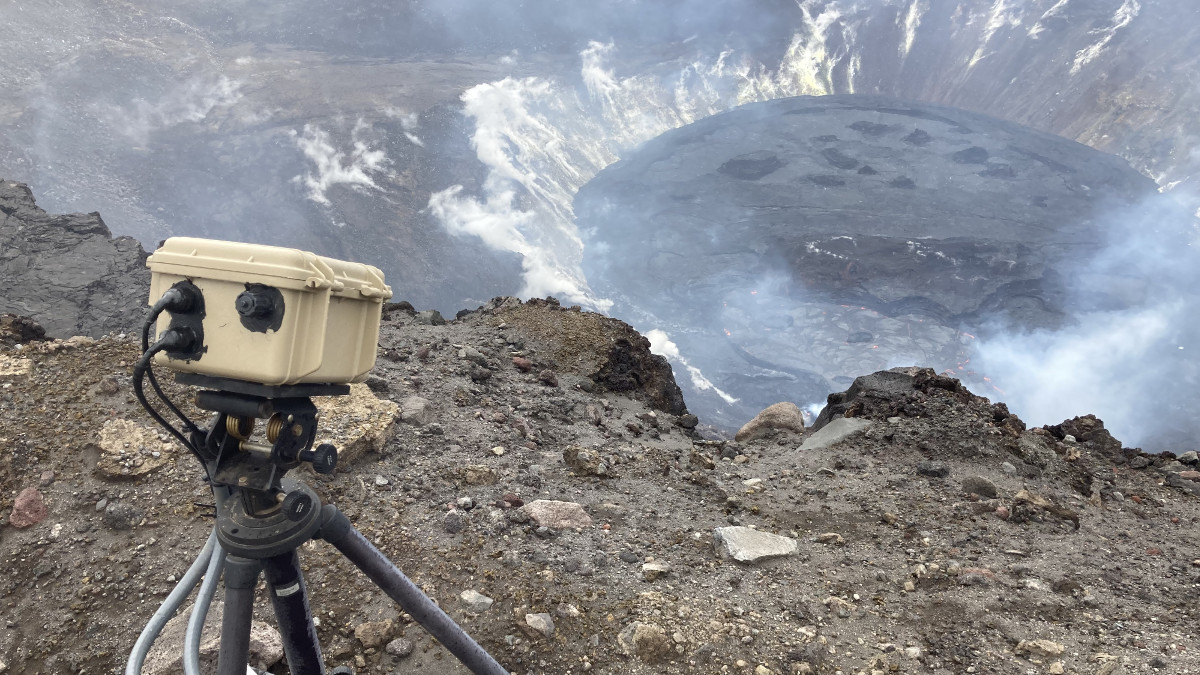 Hawaiian Volcano Observatory's continuous, automated laser rangefinder on the western rim of Halemaʻumaʻu, as seen on March 22, 2021. The instrument is aimed near the western fissure’s inlet to the lava lake, and its data are transmitted to the HVO monitoring network at a rate of one measurement per second. USGS photo by M. Patrick. 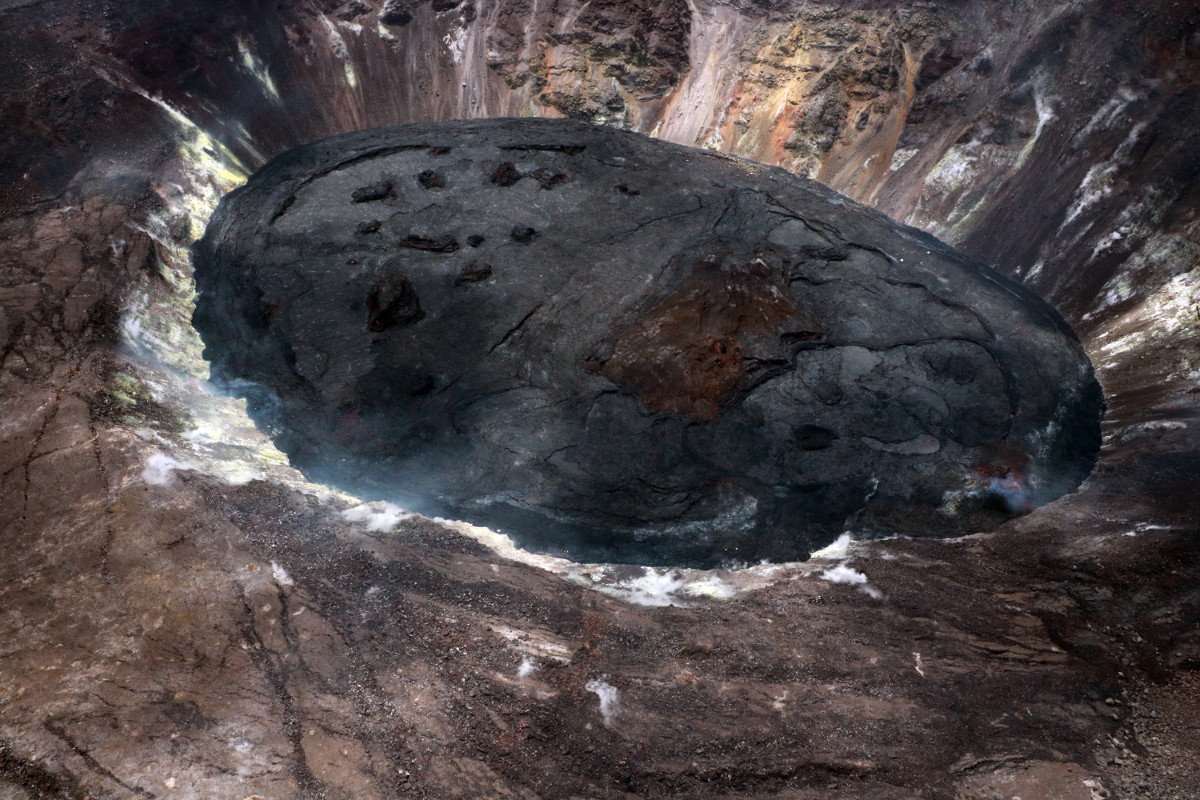 (May 13 photo) USGS Hawaiian Volcano Observatory geologists conducted an overflight of Kīlauea’s summit on the morning of May 13. Though no incandescence was visible during the overflight, field crews monitoring the ongoing eruption in Halema‘uma‘u from the ground observed a small amount of fluid lava on the surface later in the day. In this aerial photo, the west vent area is in the lower right. USGS image by K. Mulliken.

(BIVN) – Kilauea volcano continues to erupt, with all activity confined to Halemaʻumaʻu crater. In the latest Volcano Watch article, U.S. Geological Survey Hawaiian Volcano Observatory scientists and affiliates write about the process of measuring the lava lake at the summit.

Kīlauea’s summit lava lake in Halemaʻumaʻu is approaching its five-month anniversary on Thursday, May 20, while the water lake that occupied the crater for the previous seventeen months seems like a distant memory.

Some similarities still remain and USGS Hawaiian Volcano Observatory (HVO) scientists continue to use the same techniques developed to study the rate of water rise within the crater. The thoroughly tested method of determining the depth of the water lake was immediately adapted to the growing lava lake when the eruption started on December 20, 2020.

Within minutes of arriving at the crater rim—and less than two hours after the eruption onset—the first HVO field crew used a handheld, high-precision laser rangefinder to measure the vertical distance to the surface of the new lava lake. A previous Global Positioning System (GPS) survey at this site, which was used for measurements of the water lake, identified the elevation on the crater rim to within a meter (yard).

By subtracting the vertical distance to the lake surface, HVO scientists determined that the lava lake was already 10 m (33 ft) deeper than the water lake had ever been!

A similar measurement technique had first been used to determine the distance to the surface of the 2008–2018 Halemaʻumaʻu lava lake. However, it was not possible to calculate precise volumes because the shape of the crater was not well known. In 2019, shortly after the 2018 collapse of Halemaʻumaʻu, an extremely accurate “map”—called a Digital Elevation Model (DEM)—was created using a survey technique called Light Detection and Ranging (LiDAR).

Precise measurements of the lava lake surface elevation are combined with the detailed elevation model of the pre-lake topography to calculate the volume between the two surfaces using specialized computer software. The initial eruption volume measurement made on December 20 yielded a lava volume of approximately 1.5 million cubic meters (400 million gallons). The lava erupted in less than two hours was enough to fill 600 Olympic swimming pools at a rate of 5 per minute or 200 cubic meters per second.

HVO field crews make these manual measurements of the lava level across the entire lava lake surface. In mid-January, a continuous, automated laser rangefinder was added to HVO’s monitoring capability. This instrument on the western crater rim transmits one data point per second back to HVO, tracking both short- and long-term fluctuations in the lava level. 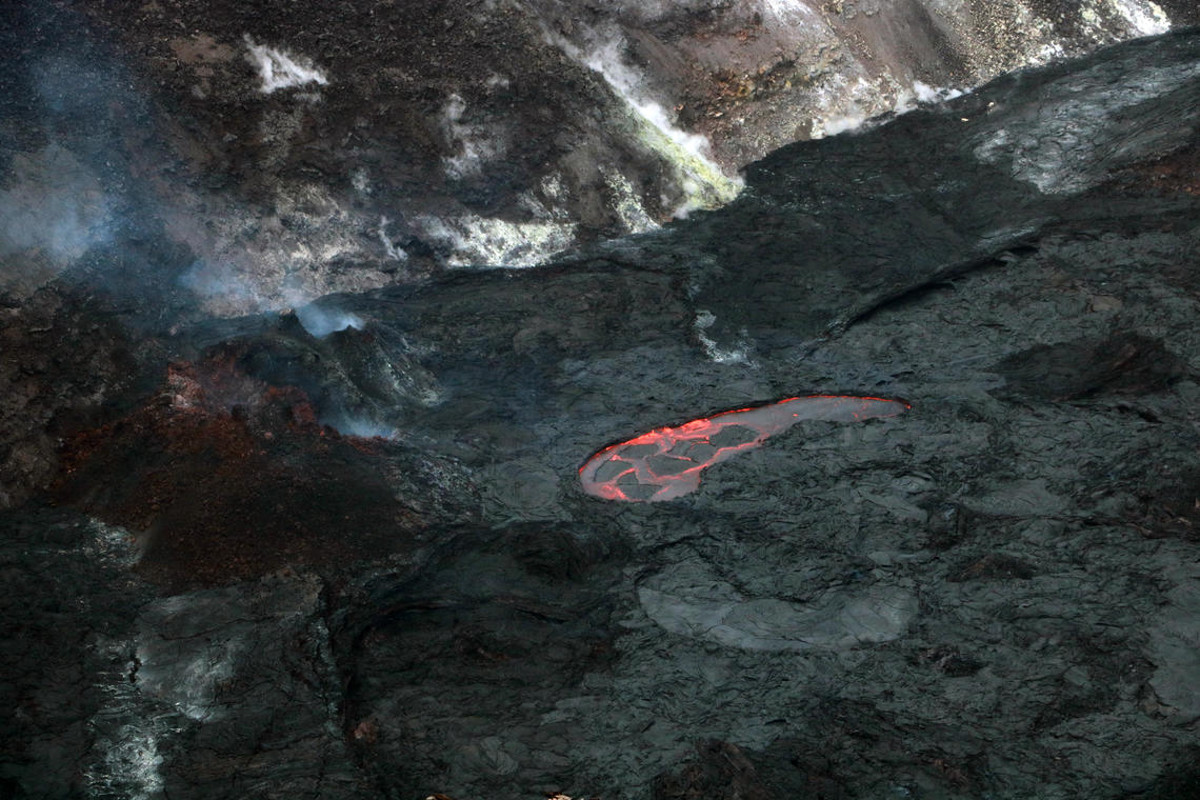 (May 13 photo) USGS Hawaiian Volcano Observatory geologists observed fluid lava on the surface of the lava lake in Halema‘uma‘u, at the summit of Kīlauea, while monitoring the eruption on May 13. Two areas of ponded lava exhibited foundering, during which more-dense solidified crust sinks into the lava lake and is replaced by less-dense liquid lava from below. This photo shows the northern ponded area foundering at approximately 1:45 p.m. HST. USGS image by K. Mulliken.

One complication with the new instrument, however, was that its laser beam could only be aimed at one point. Field crews knew that the surface of the lava lake was not completely flat, and accordingly they would average measurements from various points on the surface to obtain a representative elevation value. The continuous rangefinder has been aimed near the inlet from the western fissure, where the lava lake is slightly bulged, and therefore its elevation values are slightly higher than those measured elsewhere on the surface.

To mitigate this complication, when HVO scientists calculate lava volumes from the continuous rangefinder measurements, a correction is applied. Three-dimensional models of the lava lake surface, constructed from DEMs created using helicopter overflight photos, have shown that the elevation difference between the inlet area and the average surface has been approximately 3 m (10 ft) whenever the lava level is steadily rising, so this value is used for the correction.

Long-term analysis of the lava volumes is further complicated by short-term elevation drops associated with magma chamber deflation-inflation (DI) events, since they suggest negative volume changes. At these times, HVO field crews have observed that the western fissure is still effusing new lava, but at a slower rate.

Most of the elevation drop near the vent can be attributed to the bulge evening out as input diminishes. Considering this, HVO’s algorithm for calculating the lava volumes—and derived effusion rates—is built to ignore periods when the lava level drops.

Recent calculations using these techniques have shown that the eruption has produced a total of 40 million cubic meters (11 billion gallons) of lava. In recent weeks the effusion rate from the western fissure has averaged around 0.5 cubic meters per second (132 gallons per second). This rate is even lower than that in the later years of the Puʻuʻōʻō eruption on Kīlauea’s East Rift Zone. Continued monitoring of the lava levels within Halemaʻumaʻu may reveal any significant changes in the character of volcanic activity at Kīlauea’s summit.