A synthesized voice was utilized in the narration for this story. Video courtesy Hiehie Communications on behalf of Councilmember Sue Lee Loy. 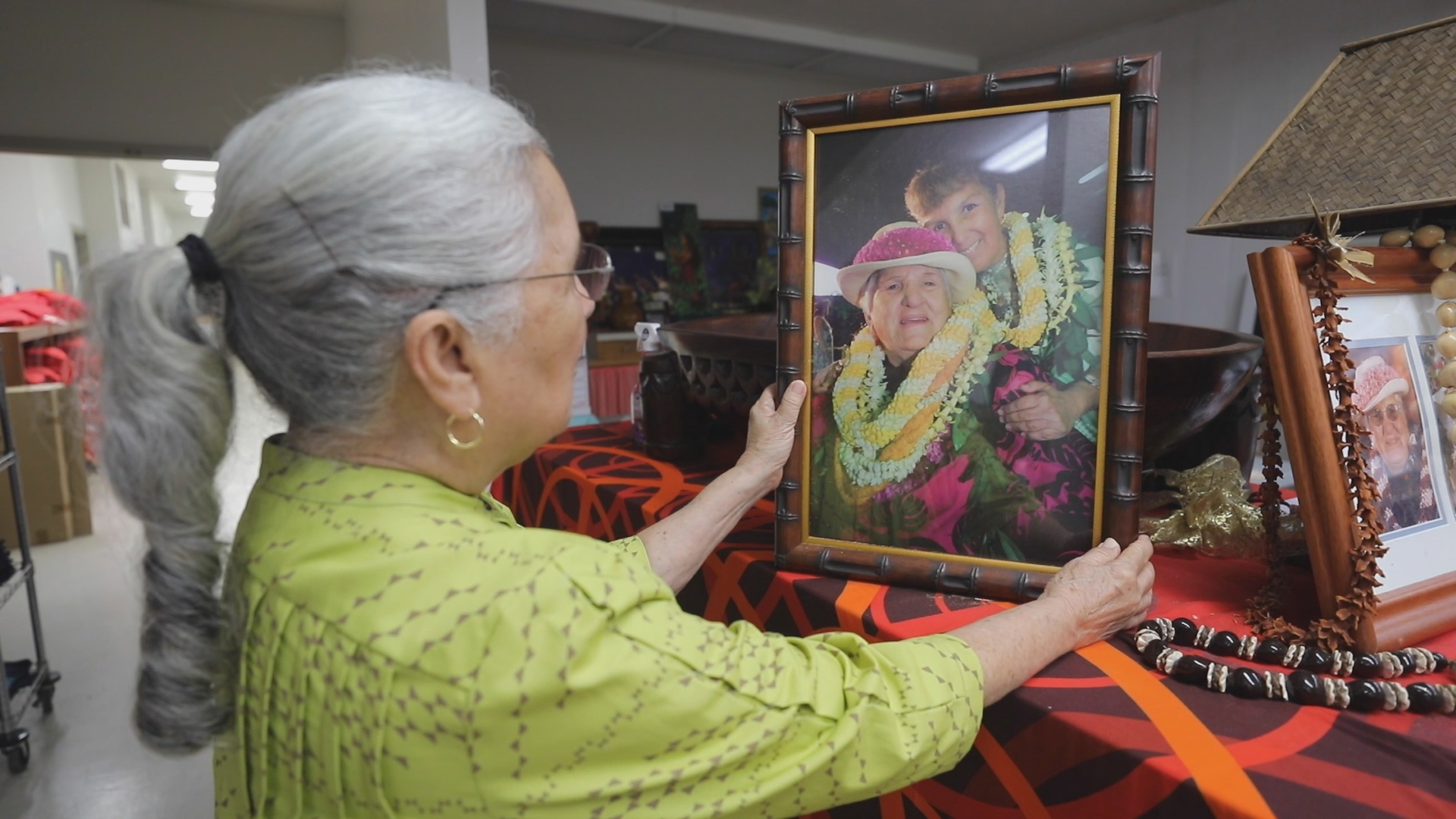 (BIVN) – It has been three years since the Hawaiʻi County Council voted to name the Merrie Monarch Festival headquarters at the Hoʻolulu Complex in Hilo after the late festival director, Aunty Dottie Thompson. This news release was provided by Hiehie Communications:

In celebration of the 100th birthday of the late Merrie Monarch Festival director Aunty Dottie Thompson, the County of Hawaiʻi honored her with a new sign in front of the Aunty Dottie Thompson Hale, home of the festival headquarters at the corner of Kalanikoa and Piʻilani Streets.

“In 1968, nobody wanted to be the chair, so the festival was going to fold. My mom stepped up and volunteered,” said Aunty Luana Kawelu, Thompson’s daughter who took the reins as festival director after her mom’s passing in 2010. “She did not want to see another Hawaiian event fall by the wayside. That’s why she stood up. This is a tradition we want to continue.” 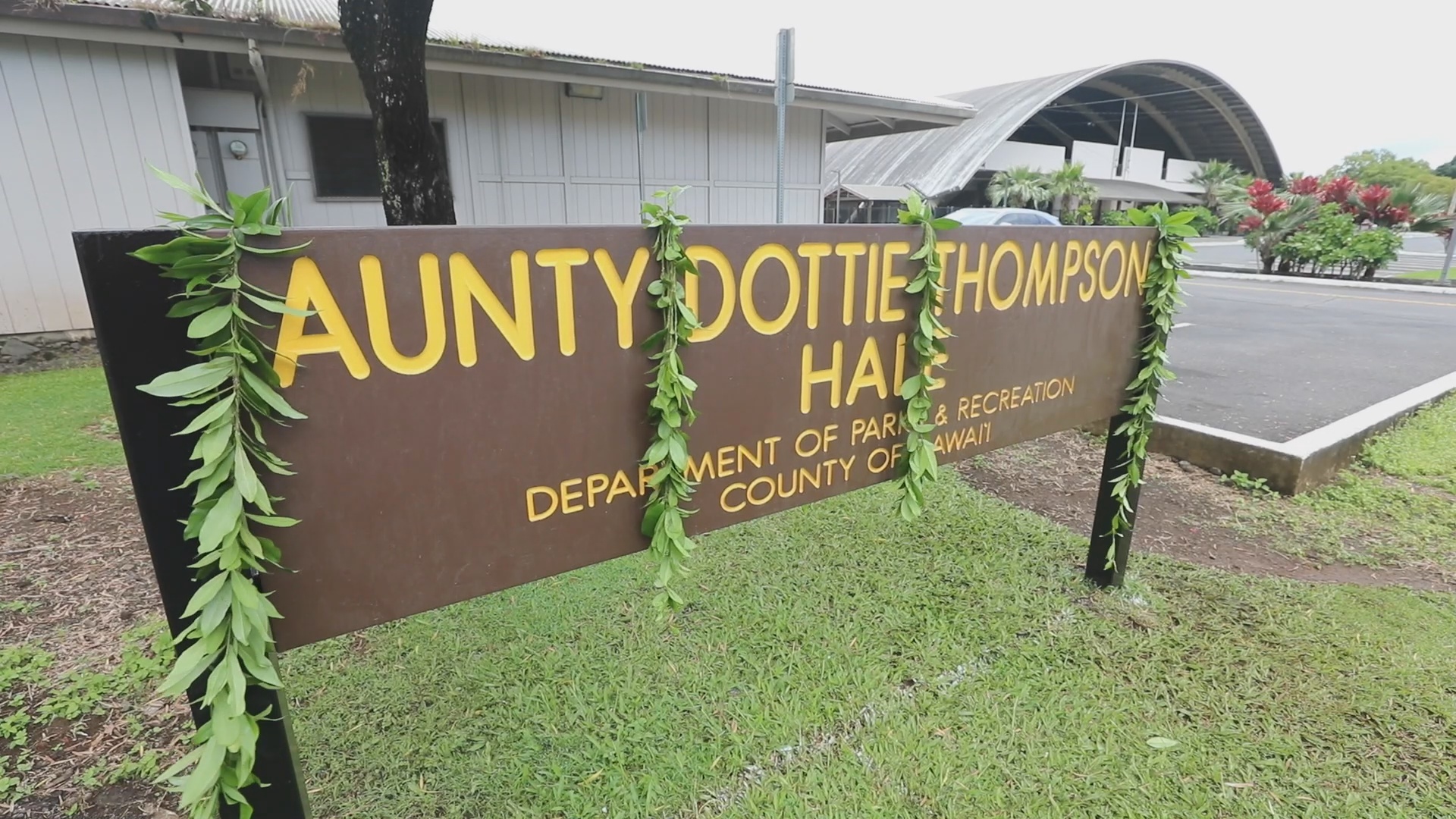 “I’m sure my mom would be so humbled by this honor. All of the people who the buildings at Hoʻolulu Complex are named after were so humble, not the kind to toot their own horn. But they are recognized for what they did and contributed,” Kawelu said.

For most of the Merrie Monarch Festival’s history, the organizers had no permanent home, jumping from office space to office space around Hilo. In 2009, Mayor Billy Kenoi granted the festival use of its current home, a building formerly used by the County’s Department of Finance. Councilmember Sue Lee Loy introduced legislation naming the building in Aunty Dottie’s honor, which was passed by the Hawaiʻi County Council in 2018.

“The Merrie Monarch Festival is my mom’s legacy. She worked so hard, gave so much,” Kawelu said. “This building being named after her means a lot to us, and it would have meant a lot to her. We appreciate being able to be here, we don’t have to worry about moving every time.”

“Hilo comes alive during the Merrie Monarch Festival. We all know that the Edith Kanakaʻole Stadium is home to hula, and the Merrie Monarch office is the anchor of the festival. This year, in recognition of Aunty Dottie’s 100th birthday and in recognition of a festival that has stood the test of time, it seemed like the right time to honor her by naming this building,” said Councilmember Sue Lee Loy, who represents the district in which the Merrie Monarch Festival is held. “She left a legacy of hard work and fortitude. The festival has continued 58 years now, a testament to Aunty Dottie’s tenacity.”

“Hilo is so resilient because we had pillars of the community like Aunty Dottie who taught us what hard work and perseverance looks like. It continues to be an honor to play a small part in honoring what our community has come together to do all these years,” Lee Loy said.