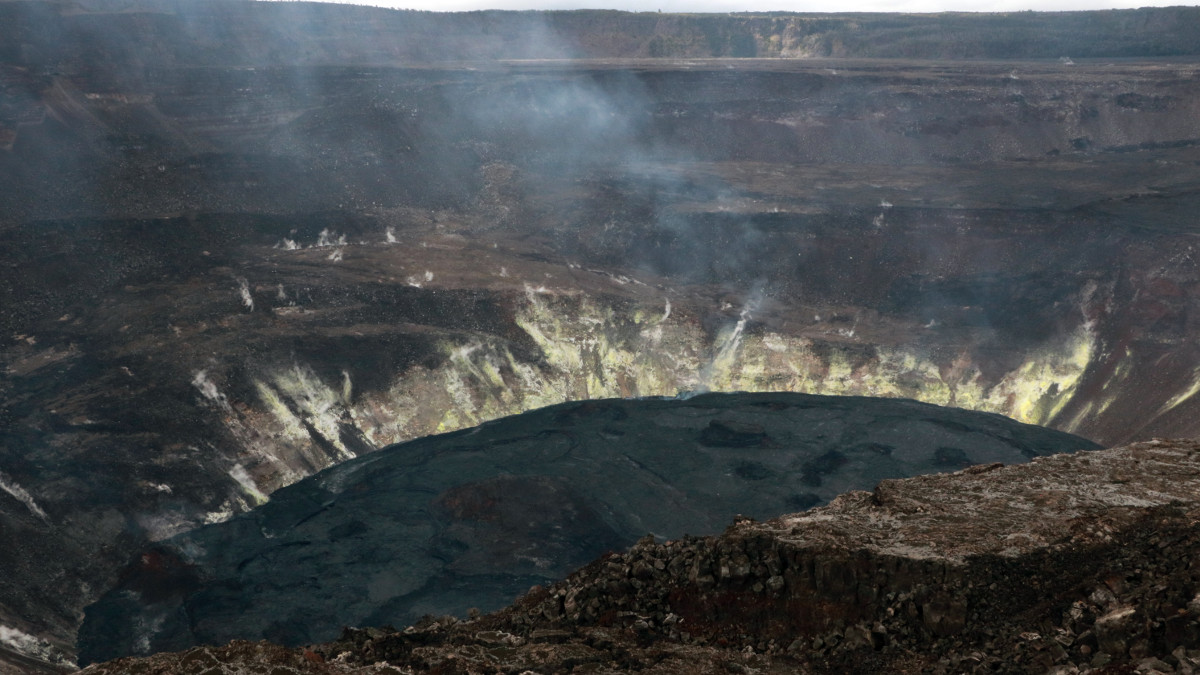 An overview of the lava lake within Halema‘uma‘u crater, at Kīlauea Volcano’s summit, taken on May 25. Kīlauea’s summit collapse in 2018 deepened Halema‘uma‘u crater by over 500 meters (1640 feet). The eruption that began the evening of December 20, 2020, has filled approximately 229 m (751 ft) of the base of Halema‘uma‘u crater, which is more than the height of the Space Needle in Seattle, Washington. USGS photo by K. Mulliken.

Kilauea Volcano Is No Longer Erupting

HAWAIʻI VOLCANOES NATIONAL PARK - No active lava was observed in webcam images of the Halema‘uma‘u crater lava lake surface in 48 hours, and field crews on Tuesday did not see any signs of lava lake activity.

(BIVN) – Scientists reported that the eruption in Halema‘uma‘u at the summit of Kīlauea Volcano has paused.

“Within the past 48 hours, no active lava was observed in webcam images of the Halema‘uma‘u crater lava lake surface,” a Wednesday report from the USGS Hawaiian Volcano Observatory stated. “Field crews on May 25 did not observe any signs of lava lake activity, and reported no signs of recently active surface lava. Sulfur dioxide emission rates remain slightly elevated.”

With Kīlauea no longer erupting, USGS HVO says it will issue a Volcano Activity Notice lowering the Volcano Alert Level for ground based hazards from WATCH to ADVISORY and the Aviation Color Code from ORANGE to YELLOW.

It is possible that the Halema‘uma‘u vent could resume eruption or that Kīlauea is entering a period of quiescence prior the next eruption. The total depth of the lake is 229 m (751 ft) as measured by a continuous laser rangefinder on the western portion of the lake near the west vent area, and is unchanged since May 11, 2021. The total volume of the lake is approximately 41.2 million cubic meters (11 billion gallons). Within the past 48 hours, no active lava was observed in webcam images of the Halema‘uma‘u crater lava lake surface. Field crews on May 25 observed no signs of lava lake activity, no incandescence, and no signs of recently active surface lava. Small incandescent spots visible in thermal webcam imagery since May 23 persist, but have become much fainter. The lake’s surface is covered by stagnant and solidified lava crust.

Scientists also noted that there is no unusual activity in the region of the East Rift Zone. “Geodetic monitors indicate that the summit and upper East Rift Zone – between the summit and Puʻuʻōʻō – is refilling at rates similar to those measured over the past 2 years and before the December 2020 eruption,” HVO stated.

Even with decreased effusion rates and no signs of lava lake activity, conditions around Halema‘uma‘u crater remain hazardous. HVO says it will continue to monitor Kīlauea for additional signs of changes in activity.