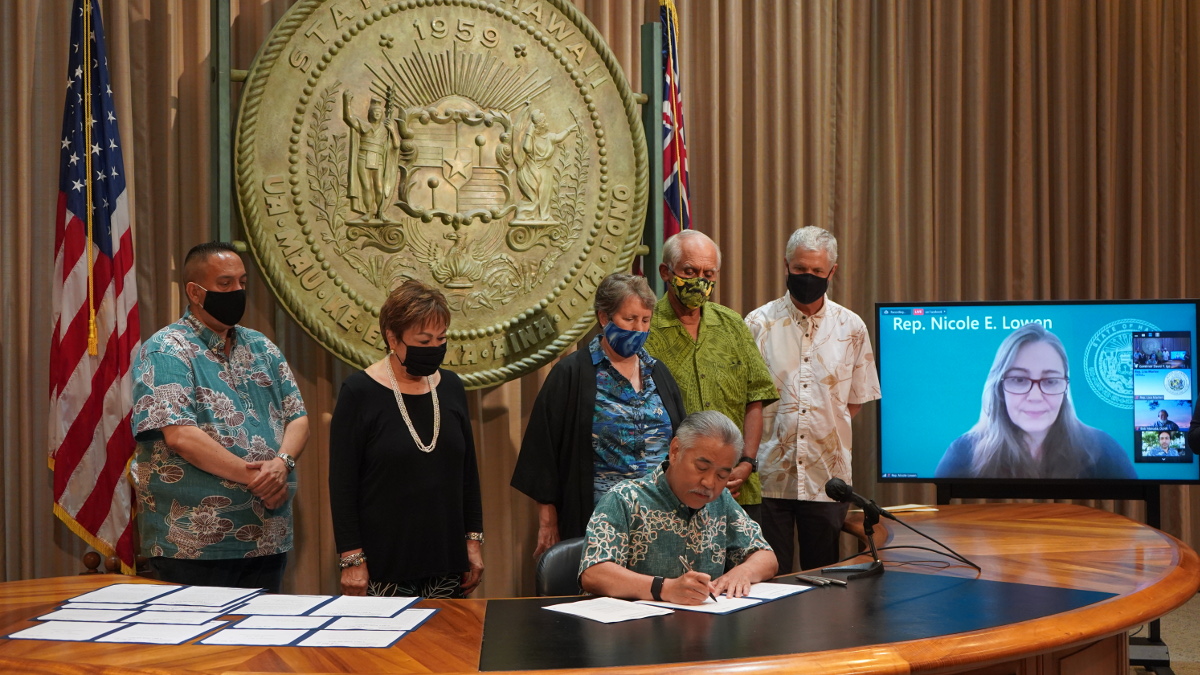 photo from Tuesday's bill signing courtesy the State of Hawaiʻi

The Hawai‘i State Legislature passed the bills this session. A signing ceremony was held on Tuesday.

“On this World Oceans Day, Hawai‘i again shows great leadership in grappling with the threats and challenges our precious marine environments face,” Gov. Ige said. “I deeply appreciate the legislature’s support of these measures which collectively advance protection, management, and stewardship of ocean resources well into the future,” Gov. Ige said.

“I want to add our thanks to leadership in both the house and the senate who were instrumental in passage of seven of the administrative bills proposed by the DLNR Division of Aquatic Resources,” said the chair of the Department of Land and Natural Resources, Suzanne Case. “This was certainly one of the most ocean conservation-oriented legislative sessions in decades, and these measures will bring us that much closer to realizing the goals of Governor Ige’s Honomua: Marine 30X30 Initiative,” Case said.

The Honomua initiative calls for the protection of at least 30% of the most sensitive nearshore waters by 2030.

These are the bills that were signed on Tuesday:

Also on Tuesday, the U.S. Senate moved a bill that aims to stop the killing of sharks for their fins.

U.S. Senator Brian Schatz (D-Hawai‘i) says that a that he cosponsored the shark protection provision as part of the United States Innovation and Competition Act, major bipartisan legislation that enhances American global competitiveness. The bill “would ban the buying and selling of shark fins in the United States and protect sharks from finning, the brutal practice of slicing fins off of live sharks and throwing the remainder of the animal back into ocean to drown, starve, or die a slow death.” Schatz says he led the effort to include the provision when the bill passed out of the Commerce Committee.

“Finning is cruel, and it’s crushing the global shark population, which is critical to our oceans and marine ecosystem,” said Senator Schatz. “I’m glad we were able to move this bill one step closer to becoming law so that we can protect more sharks from this brutal practice.”

Sen. Schatz says the bill will remove the U.S. contribution of shark fins to the global market, allow for stronger enforcement of illegal shark fin trade in the United States; and “put the U.S. in a stronger position to advocate internationally for abolishing the fin trade in other countries.”

According to Sen. Schatz:

Although the United States has banned the practice of shark finning aboard vessels in U.S.-controlled waters, there is no federal ban on the removal and sale of shark fins from a whole shark that has been caught and landed legally under U.S. law. That makes enforcing U.S. law difficult because once a shark fin is detached from the body, it is almost impossible to determine whether the shark was legally caught or the fin lawfully removed. Determination of species is also difficult, which is problematic given that some shark species are threatened with extinction.

The bill now heads to the U.S. House of Representatives for consideration.