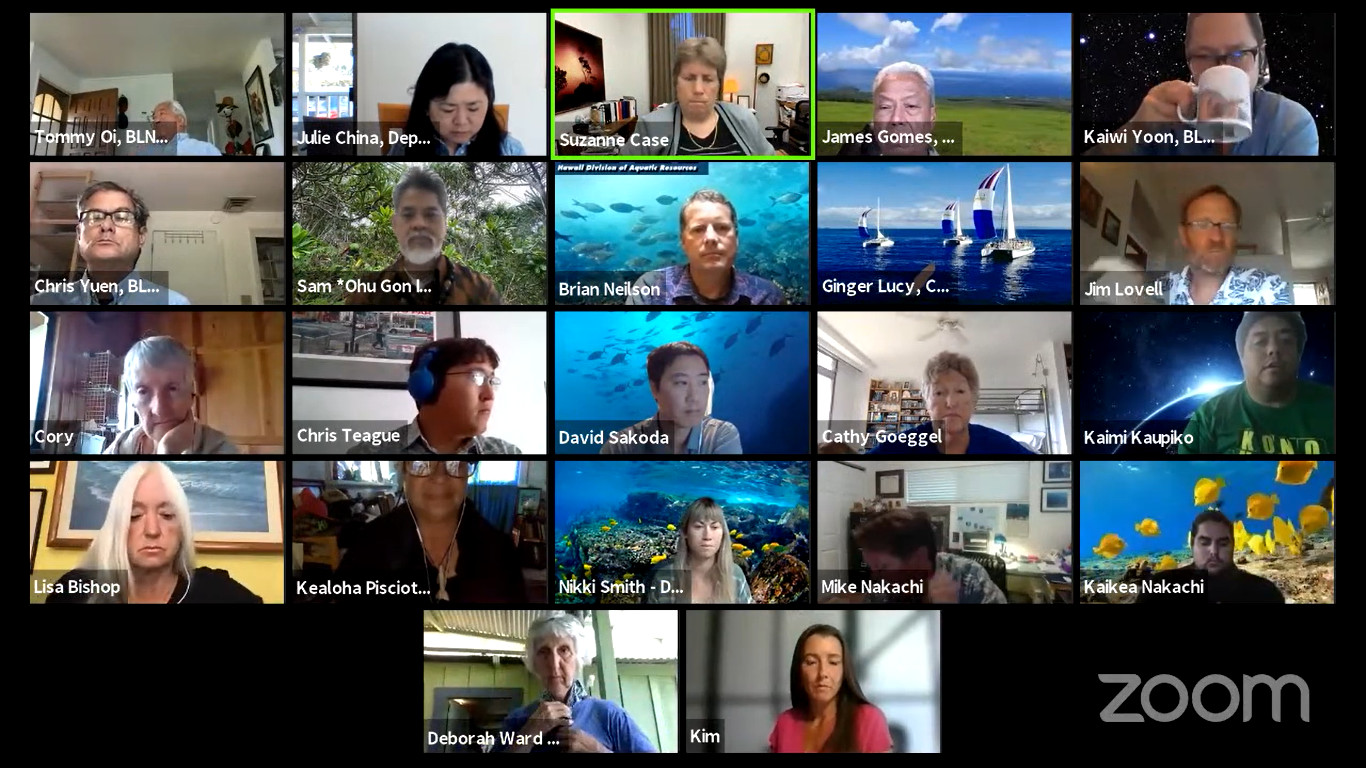 photo from the Hawaiʻi BLNR livestream

HONOLULU, Hawaiʻi - The land board couldn't decide on accepting a revised Environmental Impact Statement for the issuance of commercial aquarium permits.

(BIVN) – The Hawaiʻi Board of Land and Natural Resources was at an impasse on Friday, as it considered accepting or rejecting a Revised Final Environmental Impact Statement for the issuance of commercial aquarium permits for the West Hawai‘i Regional Fishery Management Area.

Video stream of BLNR meeting on June 25, 2021. Discussion begins one hour into the meeting.

From a Hawaiʻi Department of Land and Natural Resources news release issued after the 7 hour meeting concluded:

Today, the Board of Land and Natural Resources by a three-to-three tie reached an impasse in a decision to accept or reject the Revised Final Environmental Impact Statement (RFEIS) submitted by seven aquarium fish collectors for the West Hawai‘i Regional Fishery Management Area (WHRFMA). The law provides a 30-day time-period in which the board must reach a decision. The clock started on June 8, when the RFEIS was published and ends on July 8, though the applicants can request a 15-day extension. If no action is taken by the deadline, the RFEIS will be deemed accepted.

In May 2020 the board declined to accept the Final Environmental Impact Statement prepared by the Pet Industry Joint Advisory Council. Aquarium fishers revised the FEIS over the past year. The revision, which incorporated many of the findings and reasons for denial by the land board, had been opened to public comment for 45-days.

Today’s board decision was limited to the acceptability of the revised final EIS and was not a decision on aquarium fishing permits in Kona. The seven aquarium fishers who undertook the EIS are expected to apply for permits.

According to the DLNR, the revised final EIS outlines seven alternative possible courses of action including:

A 333-page document featured public testimony for and against the revised final EIS.