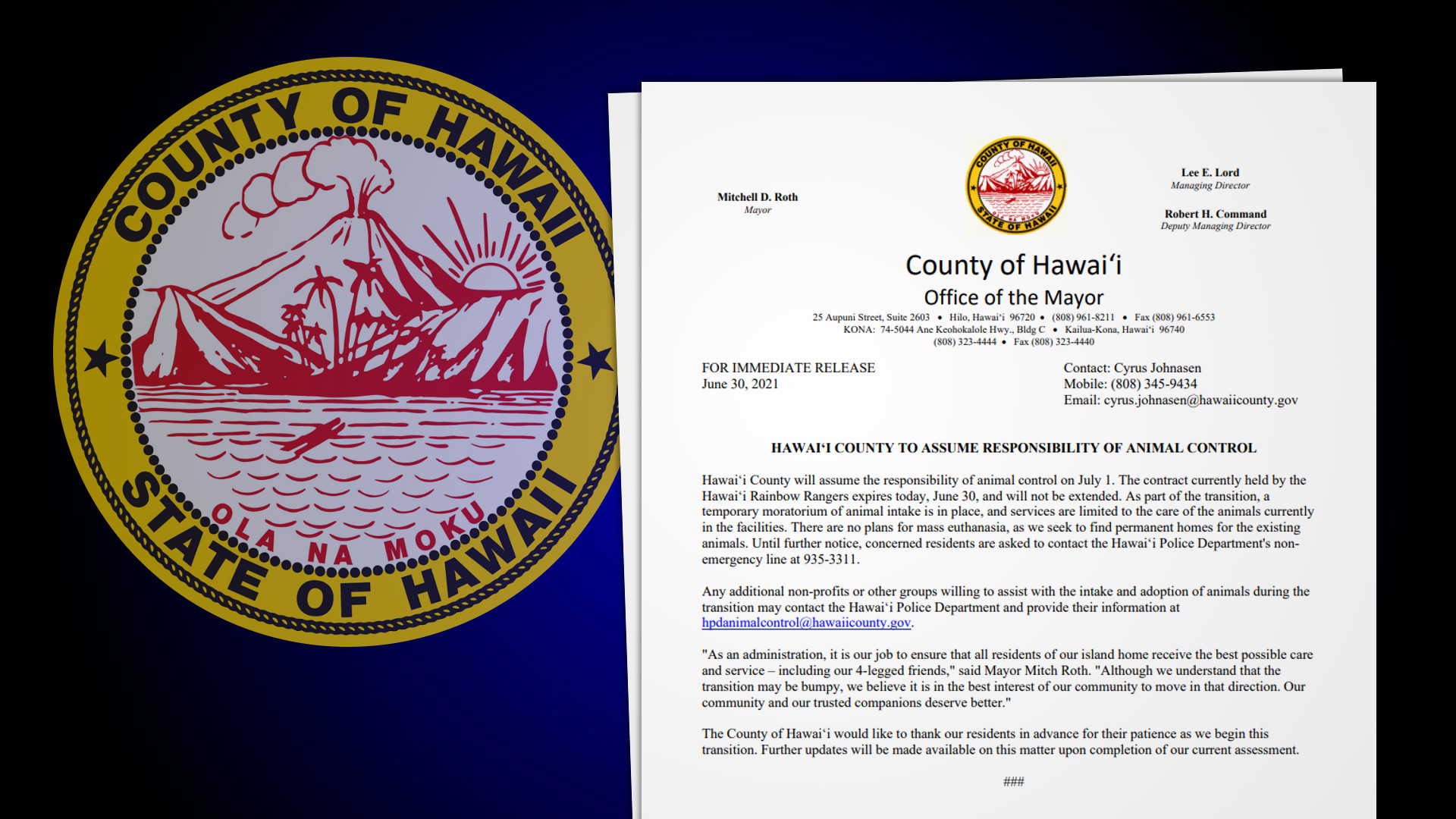 HAWAIʻI ISLAND - The County says the contract held by the Hawaiʻi Rainbow Rangers expired June 30 and will not be extended. There are no plans "for mass euthanasia", officials say.

(BIVN) – The County of Hawaiʻi on Wednesday announced it would assume responsibility of animal control on the Big Island, as the contract to do the work – held by Hawaiʻi Rainbow Rangers – expired on June 30th and was not extended.

“As part of the transition, a temporary moratorium of animal intake is in place, and services are limited to the care of the animals currently in the facilities,” a news release from the office of Mayor Mitch Roth stated. “There are no plans for mass euthanasia, as we seek to find permanent homes for the existing animals.”

Until further notice, concerned residents are asked to contact the Hawaiʻi Police Department’s nonemergency line at 935-3311.

“As an administration, it is our job to ensure that all residents of our island home receive the best possible care and service – including our 4-legged friends,” said Mayor Mitch Roth. “Although we understand that the transition may be bumpy, we believe it is in the best interest of our community to move in that direction. Our community and our trusted companions deserve better.”

Earlier in the day, the Hawaiʻi Police Department informed County officials that the animal control contract was not being extended “due to all of the issues being raised about the caring of the animals that have been captured and their inability to provide the services required under the contract (i.e. animal control officers, timely responses, etc.).”

Police Chief Paul Ferreira noted that “false information concerning the decision” on the animal control contract was being spread across social media. In his message to County officials, Chief Ferreira reported that police met with Hawaiʻi Rainbow Rangers on June 28, saying:

During this meeting, HPD explained to the HRR Representatives that they are proceeding with an emergency procurement to contract staff to assist in continuing the animal control services needed and asked that HRR continue the maintenance of the facilities currently under their control and caring for the animals, during a transition period of at least 1 month. During this period, HRR would be compensated for their services in line with the Animal Control contract, however, at reduced rates as they will not be performing all of the services (i.e. intake of animals, responding to calls for services, etc.) .

As for the facilities under the control of HRR, there are three which were discussed at the meeting on Monday. The first being the Kona Facility, belonging to the County, so there were no concerns about the County continuing to use it as a shelter. The second is the Waimea Facility, which was formerly being used as a shelter by the Hawaiʻi Island Humane Society is being leased from Parker Ranch. HPD informed the HRR staff that they will be reaching out to Parker Ranch to indicate interest in continuing to lease the facility should HRR vacate the lease. The third facility is a warehouse in the Keaau Industrial Park, being leased solely by the HRR. This Keaau facility is not suitable for an animal shelter, but HPD informed the HRR staff that until another location can be designated, it should continue to be utilized.

HPD staff is going out to the facilities along with veterinary services to do an inventory and assessment of the animals that are being held as well as conduct an inventory of equipment that belongs to the County that was transferred when HRR assumed the contract from the Hawaiʻi Island Humane Society. Staff is also in discussions with various animal care groups to include the Hawaiʻi Island Humane Society as to what will be the disposition of animals that are currently being held. There have also been discussions with representatives from the American Society for the Prevention of Cruelty to Animals (ASPCA) and other animal groups on Hawaiʻi Island regarding the disposition of animals under the care of the HRR.

In its announcement on Wednesday, the County said “any additional non-profits or other groups willing to assist with the intake and adoption of animals during the transition” may contact the Hawaiʻi Police Department and provide their information at hpdanimalcontrol@hawaiicounty.gov.