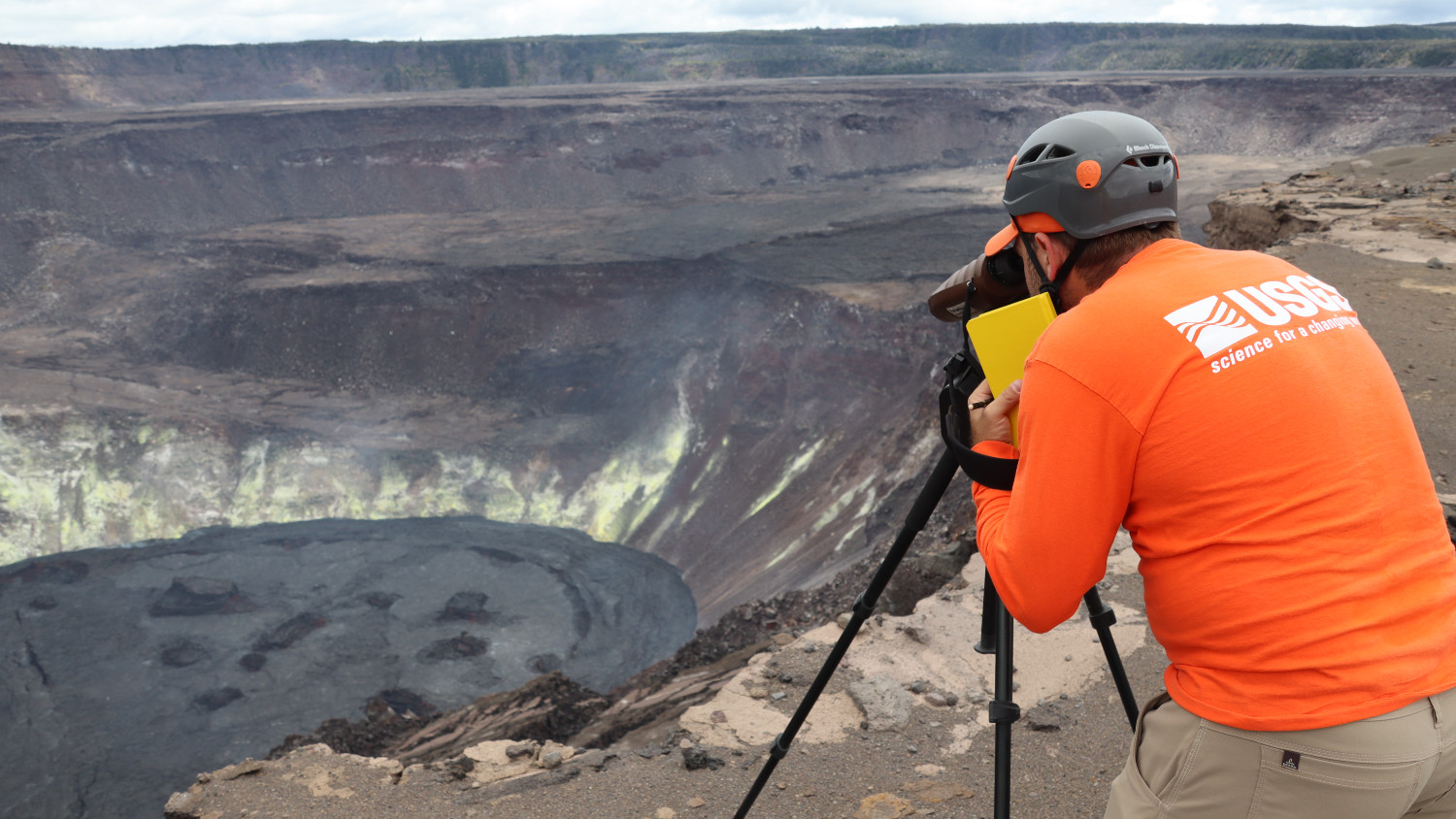 USGS: A Hawaiian Volcano Observatory geologist uses a laser rangefinder to survey points across the solidified lava lake surface in Halema‘uma‘u, at the summit of Kīlauea. No significant changes in lake surface elevation have been observed in recent weeks. (USGS photo by M. Patrick taken on July 9, 2021)

HAWAIʻI VOLCANOES NATIONAL PARK - Kīlauea Volcano is not currently erupting, as seismicity has slowly increased in the summit region in recent weeks. 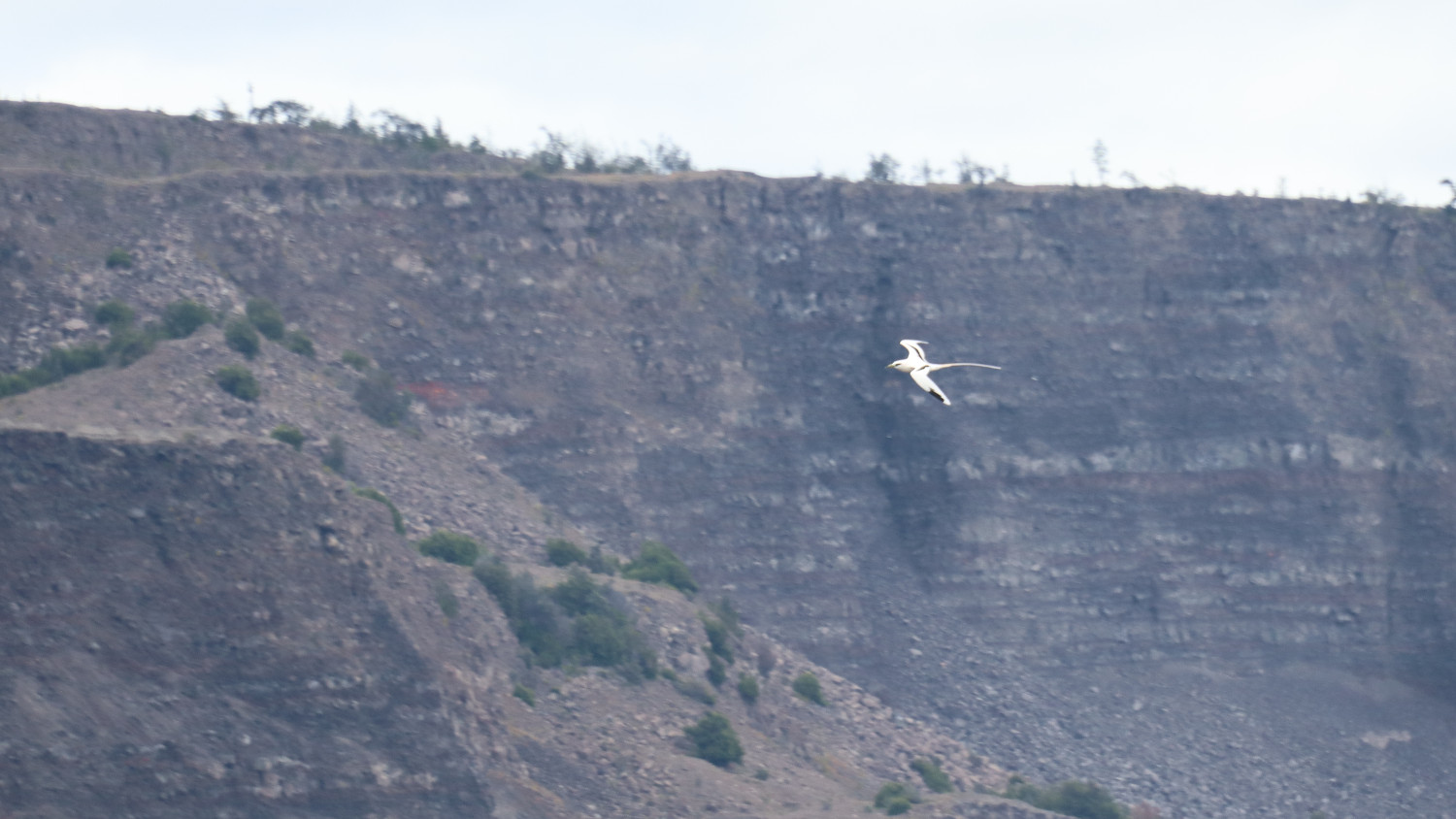 USGS: A koa‘e kea (white-tailed tropicbird) soars above Halema‘uma‘u, at the summit of Kīlauea. Typically, a few of these birds can be seen circling over the lava lake in Halema‘uma‘u during field visits. (USGS photo by M. Patrick)

(BIVN) – Seismicity has slowly increased at the summit of Kīlauea in recent weeks, but the Hawaiʻi island volcano is not currently erupting.

The Volcano Alert Level remains at YELLOW/ADVISORY. Scientists on Tuesday repeated that it is possible that the Halema‘uma‘u vent could resume eruption or that Kīlauea is entering a longer period of quiescence prior to the next eruption.

In its weekly Kīlauea update, the USGS Hawaiian Volcano Observatory wrote that no surface activity has been observed by field crews or in webcam images since May 23, 2021. The surface of the lava lake within Halemaʻumaʻu crater is completely covered by solidified lava crust.

The most recent sulfur dioxide (SO2) emission rate, measured on July 6, 2021, was 70 tonnes per day (t/d). SO2 emission rates have been approaching levels associated with the non-eruptive period from late 2018 to late 2020 (30-35 t/d) and are significantly lower than emission rates that averaged over 800 t/d from mid-February to mid-April. Summit tiltmeters recorded two deflation-inflation cycles over the past week, along with continued gradual inflation. Continued inflation was also recorded by summit GPS instruments; however, the pattern of tilt and GPS motions indicates that the inflation center may have shifted slightly to the southern part of the caldera. Seismicity has been slowly increasing in recent weeks, though it has not yet reached levels seen immediately prior to the December 2020 eruption.

No unusual activity was noted in the East Rift Zone, scientists said. “Geodetic monitors indicate that the summit and upper East Rift Zone – between the summit and Puʻuʻōʻō – is refilling at rates similar to those measured over the past 2 years and before the December 2020 eruption,” USGS wrote. “SO2 and hydrogen sulfide (H2S) emissions from Puʻuʻōʻō were below instrumental detection levels when last measured on January 7, 2021.”

The weekly update for Mauna Loa volcano, which is also not erupting, is expected later this week.