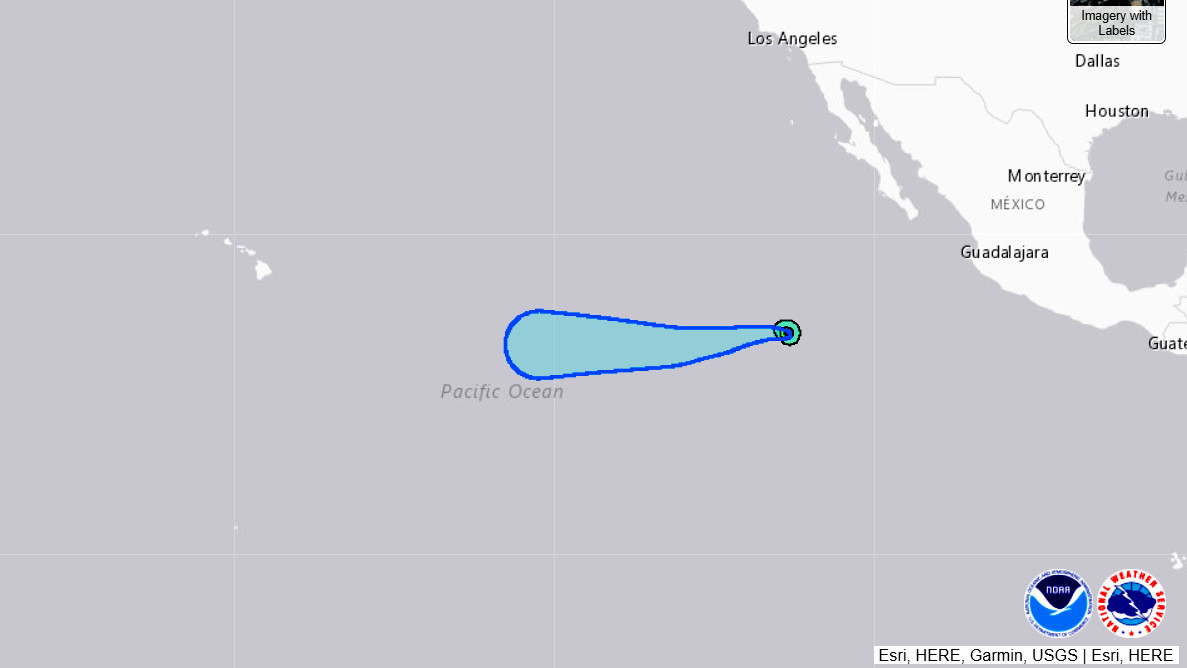 Image from interactive NOAA/NWS map posted to the National Hurricane Center website showing the location of Felicia, and its projected path, relative to Hawaiʻi and North America.

Felicia Strengthens Into A Hurricane, Far From Hawaiʻi

Felicia strengthened into a hurricane overnight. As of Thursday morning, the storm was 775 miles southwest of the southern tip of Baja California, moving west at 12 mph.

Additional strengthening is expected through early Friday, the National Hurricane Center says. Some slow weakening is possible by this weekend. 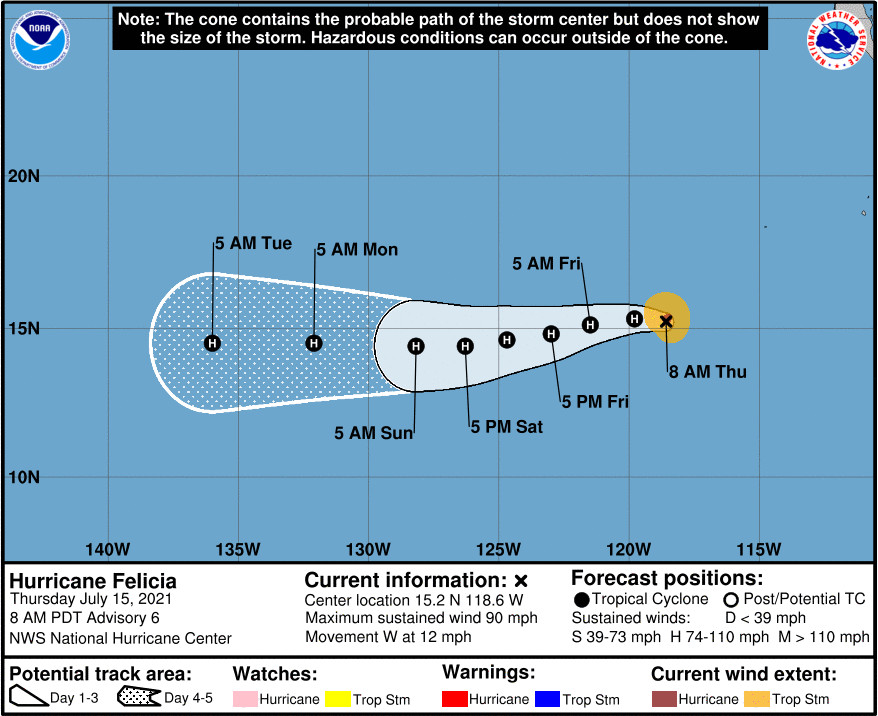 Local forecasts are not focusing on Felicia yet, other than to say the breezy trades over Hawaiʻi “will likely continue through the middle and latter part of next week, but details become a bit less clear as the gradient may be influenced by tropical systems moving into the Central Pacific basin from the east.”

From the National Hurricane Center discussion on Felicia at 8 a.m. PDT:

Earlier this morning, an eye began to appear in satellite imagery. However, since that time the convection has eroded slightly over the southwestern portion of the circulation, making that feature somewhat obscured. This could be a sign that an eyewall replacement cycle (ERC) is underway. Although the eye is not readily apparent in satellite, Felicia has a well-defined inner core structure with persistent and very cold cloud tops surrounding much of the center. The Dvorak T-numbers continue to rise, and the latest blend of the available values from TAFB, SAB, and the UW-CIMSS ADT support increasing the initial intensity to 80 kt for this advisory.

Felicia continues to make a gradual turn to the left, and the initial motion is now 270/10 kt. The ridge currently to the north of the hurricane is foreast to shift to its northwest over the next day or so, which will force the cyclone west-southwestward for a couple of days. By early next week, Felicia should once again become positioned to the south of the ridge, which would result in a westward motion through the end of the forecast period. The latest NHC track forecast is little changed from the previous one, and is near the tightly clustered track guidance.

Rapid intensification (RI) has continued, and Felicia’s winds have increased by 50 kt since early yesterday morning. Aside from a possible pause in the cyclone’s intensification in the near-term due to the ERC, the environment of low shear and warm sea surface temperatures (SSTs) that have been supporting the strengthening should continue around the cyclone over the next 24 h. By late Friday, Felicia is forecast to move into a drier airmass which may begin to disrupt the convection, while the cyclone also begins to move over slowly decreasing SSTs. This should cause the system to gradually weaken through the remainder of the forecast period. The latest NHC intensity forecast is slightly above the bulk of the guidance through 24 h due to the RI factors currently in place. Thereafter, the forecast is close to the HFIP Corrected Consensus Approach model HCCA.

Behind Felicia, another disturbance is likely to develop into a tropical cyclone within the week.

A broad area of low pressure formed about 500 miles south of the coast of southern Mexico, forecasters say. “Although there is a large area of associated showers and thunderstorms, this activity is currently disorganized,” the National Hurricane Center wrote. “However, environmental conditions are conducive for gradual development over the next several days, and a tropical depression is likely to form this weekend well offshore of the southwestern coast of Mexico, while the system moves westward or west-northwestward at around 15 mph.”