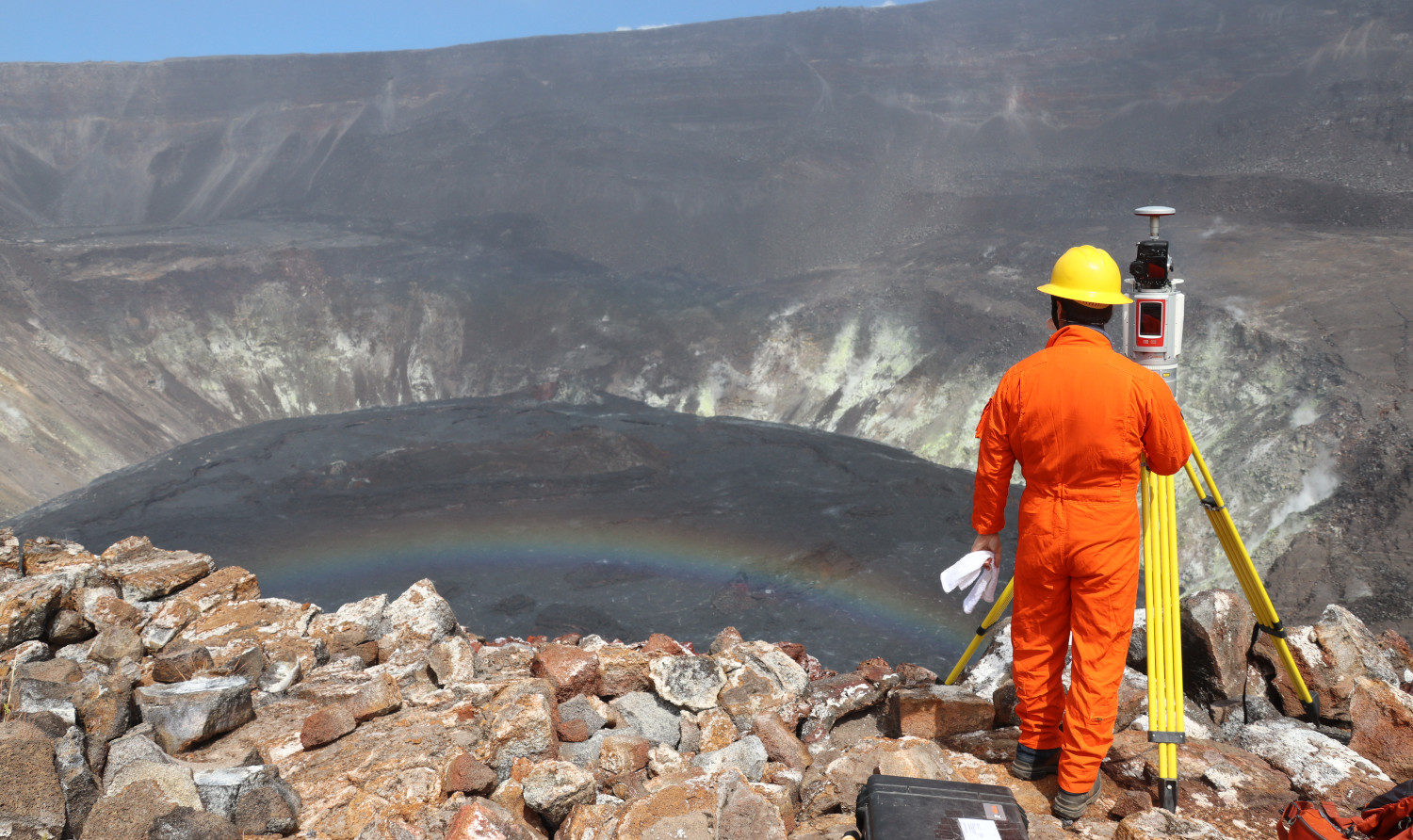 USGS: "An HVO geologist conducts a routine high-precision survey of the inactive lava lake in Halema‘uma‘u, at the summit of Kīlauea volcano. Mist moving across the caldera on the morning of July 22 produced a rainbow over the lake. No significant changes have occurred in Halema‘uma‘u in recent weeks." USGS photo by M. Patrick.

HAWAIʻI VOLCANOES NATIONAL PARK - During the current pause in eruptive activity, scientists are conducting a survey of the area around Halemaʻumaʻu. 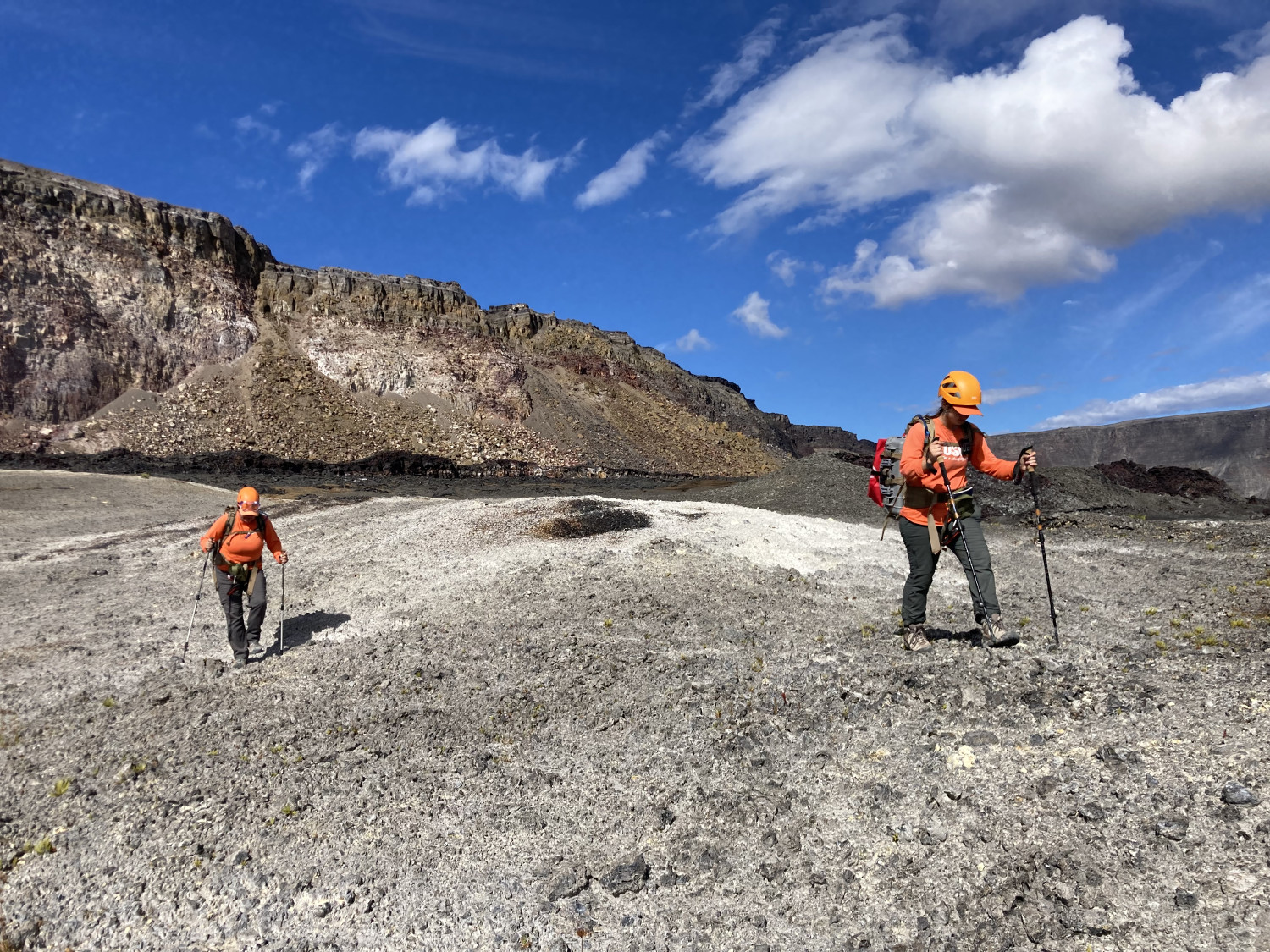 USGS: “HVO scientists walk transects along the down-dropped portion of Kīlauea caldera floor as part of a gas survey conducted on July 22… The light-colored ground the scientists are walking on is evidence of such gases interacting with, and altering, the darker volcanic rocks in the area.” USGS image by K. Mulliken.

(BIVN) – Kilauea volcano on Hawaiʻi island is not currently erupting, and during the lull in activity scientists are busy surveying the summit area.

The USGS Hawaiian Volcano Observatory recently published a set of photos showing the field work that took place around Halemaʻumaʻu, where the now-inactive lava lake formed in December 2020. Geologists, wearing hard hats as they worked, conducted a gas mapping mission on the cliffs and down-dropped blocks that subsided during the 2018 collapses at the summit. 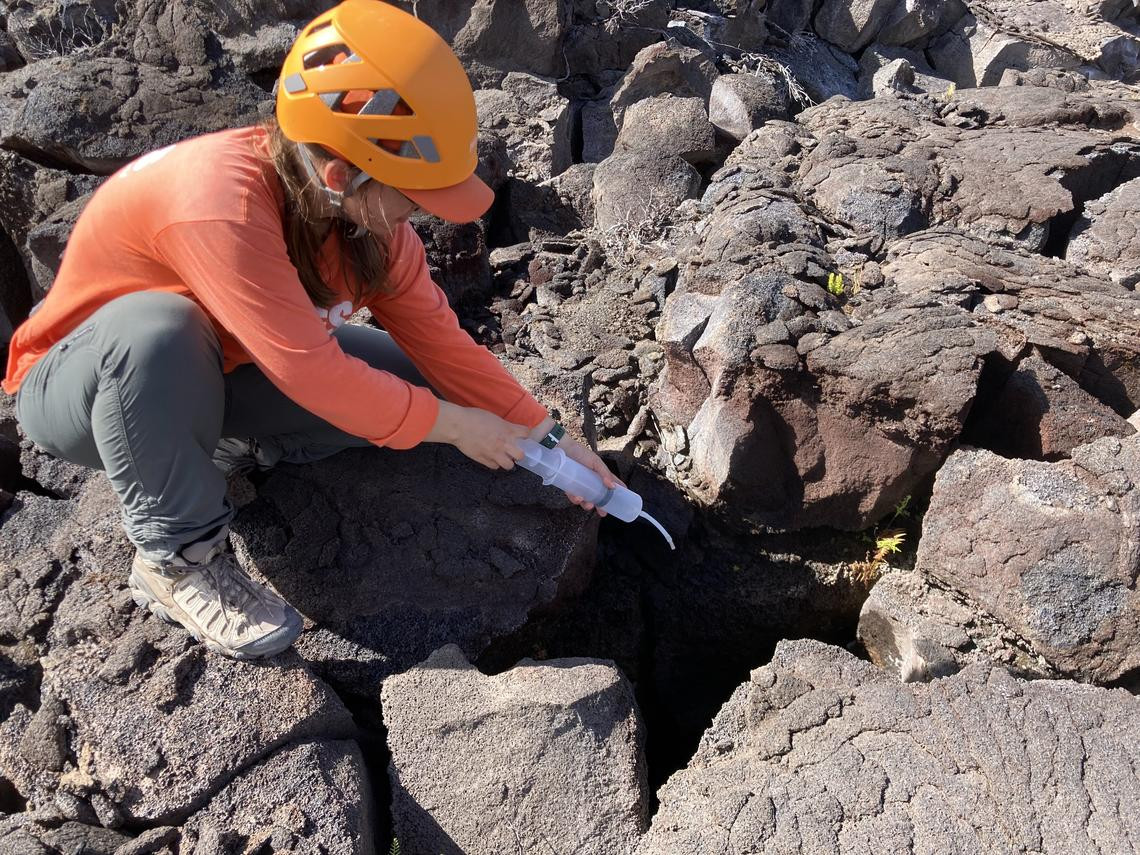 USGS: “An HVO scientist samples the gas around a crack identified as emitting elevated levels of carbon dioxide (a volcanic gas) on the down-dropped block within Kīlauea caldera.” USGS image by K. Mulliken, taken on July 22, 2021.

USGS says “the caldera-wide ongoing gas survey will be compared to gas surveys done in the area prior to the 2018 collapse events and will reveal any changes in Kīlauea summit gas pathways and emissions.” The scientists measured the amount of carbon dioxide (CO2), sulfur dioxide (SO2), water vapor (H2O), and hydrogen sulfide (H2S) in order to map the areas of the caldera floor where specific volcanic gases are being emitted and their concentrations.

USGS says the work was conducted within a closed area of Hawai‘i Volcanoes National Park, with park permission.

In its most recent update, the USGS said sulfur dioxide (SO2) emission rates at the summit are close to the low levels associated with the non-eruptive period from late 2018 to late 2020. “It is possible that the Halema‘uma‘u vent could resume eruption or that Kīlauea is entering a longer period of quiescence prior to the next eruption,” the USGS repeated.