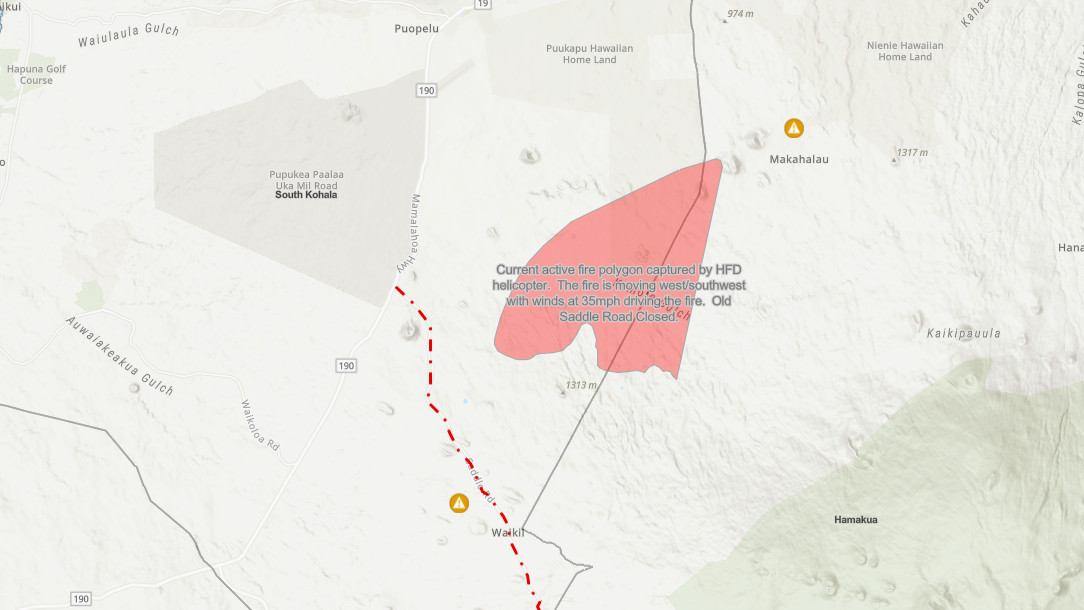 UPDATE (7:15 p.m. HST) – Hawaiʻi County officials say they are closing Highway 190 between the Lalamilo Farm Road and Waikoloa Road due to the ongoing brushfire. State and County firefighters are on scene and continue to battle the blaze.

PREVIOUS UPDATE (6:33 p.m.) – The Hawaiʻi Fire Department called for the immediate evacuation of Waikiʻi Ranch in South Kohala on Saturday evening, due to the ongoing brushfire. A mandatory evacuation is now in place for all residents of Puʻukapu Hawaiian Homestead and Waikiʻi Ranch.

Hawaiʻi County and State DLNR Division of Forestry and Wildlife firefighters are on scene and continue to battle the blaze, which has engulfed roughly 14,000 acres and continues to shift direction based on wind conditions.

Officials say “residents who are close enough to see the fire should evacuate the area promptly.” A shelter is available to displaced residents at the Waimea District Park.

As a result of the fire, the Old Saddle Road has also been closed effective immediately.

Drivers are also asked to remain cautious of an increase of animals on the roadways, officials say.

PREVIOUS UPDATE (5:20 p.m. HST) – The Hawaiʻi Fire Department on Saturday called for the immediate evacuation of the Puʻukapu Hawaiian Homestead in Waimea due to an ongoing brushfire.

In a 5 p.m. HST update, the County of Hawaiʻi said the fire has engulfed over 12,000 acres and continues to shift direction based on wind conditions.

“Residents who are close enough to see the fire should evacuate the area promptly,” a Hawaiʻi County Civil Defense message stated. “A shelter is available to displaced residents at the Waimea District Park,” the message added.

“Waikiʻi Ranch residents are asked to remain on heightened alert, as evacuations may be necessary,” the official advisory said. The Old Saddle Road between Highway 190 and Daniel K. Inoyue Highway was closed on Saturday afternoon.

The Hawaiʻi Fire Department earlier reported the brush fire was located mauka of Highway 190 and north of Old Saddle Road. Fire crews from the County of Hawaiʻi and the Hawaiʻi DLNR Division of Forestry and Wildlife continued to fight the brush fire on Saturday. Pōhakuloa Training Area fire crews also said they are on standby to assist, and said in a social media post that U.S. Army UH-60 Blackhawks are being brought in to assist as needed.

The runaway fire was first reported on Mana Road near Parker Ranch land, outside of Waimea, around 10:45 a.m. on Friday morning. Today, an interactive Hawaiʻi County Hazard Impact Map showed the fire was burning its way onto Puʻukapu Hawaiian Home Lands.

Earlier today, the Hawaiʻi County Civil Defense issued the following advisories which are still applicable to the situation: