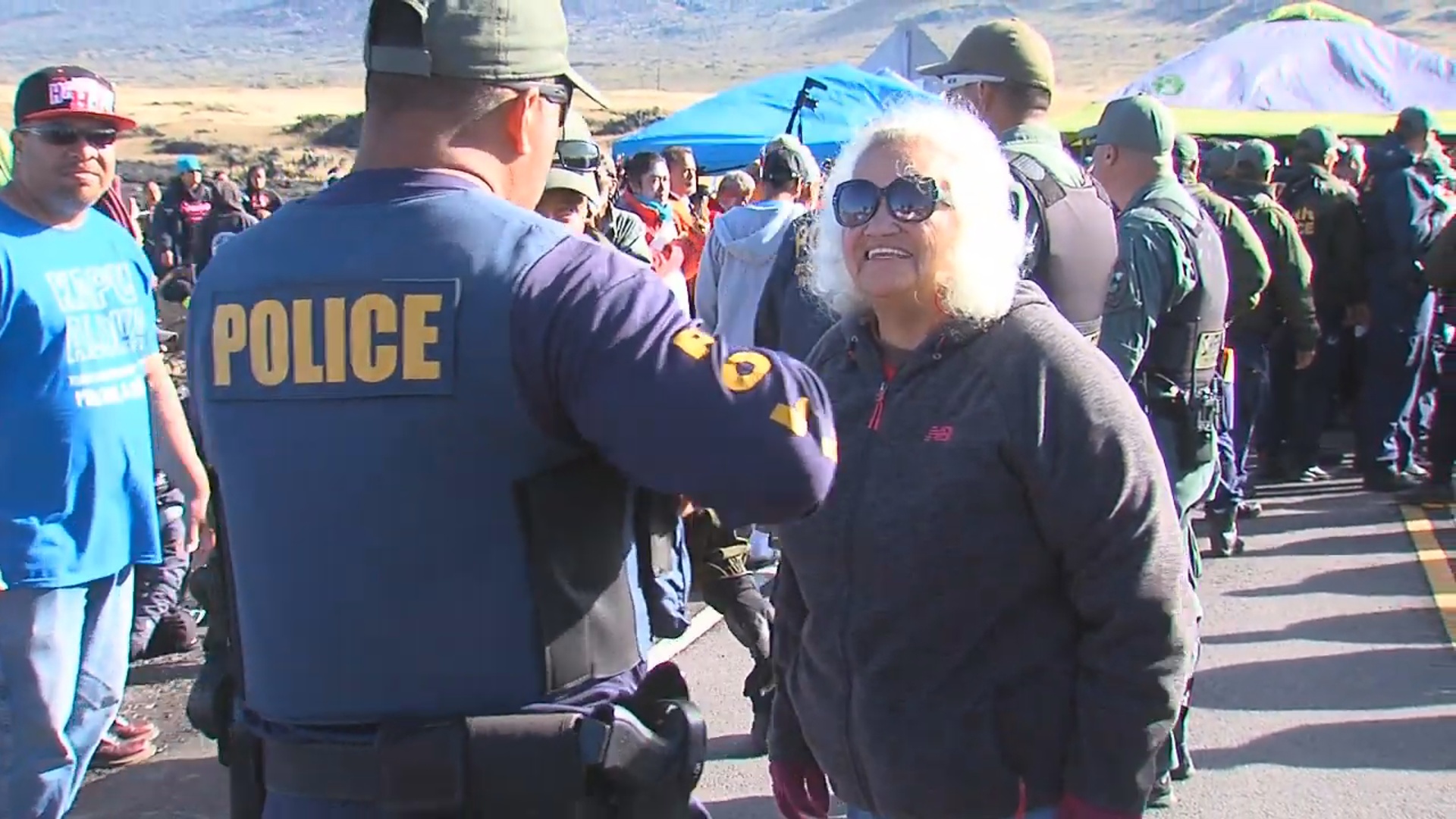 File photo from video recorded in July 2019 showing Maxine Kahaulelio as she is arrested on the Mauna Kea Access Road.

(BIVN) – Four Native Hawaiians accused of obstructing the Mauna Kea Access Road in opposition to the construction of the Thirty Meter Telescope were found not guilty in court on Friday.

Hilo District Judge Kanani Laubach ruled in favor of Marie Alohalani Brown, Maxine Kahaulelio, Ranette Robinson and Keliʻi W. Ioane; the first of 38 to go to trial in over the arrests that occurred back in July 2019.

News media reported that during the trial – which began in January 2020 and was delayed due to the COVID pandemic – officials testified that the Mauna Kea Access Road was closed and that there were no permits issued for oversized vehicles. That evidence, Judge Laubach said, “equals no obstruction,” because “there would be no unreasonable inconvenience or hazard”.

“We are hopeful that justice will also prevail for the remaining Kūpuna who are still in trial,” said the Puʻuhonua o Puʻuhuluhulu supporters on Facebook, which handled much of the communication for those opposed to the TMT construction during the 2019 standoff. “In this case, the state failed to prove that the actions of the Kūpuna to protect Maunakea were criminal. Hawaiian people should never be criminalized for peaceful resistance and nonviolent protection of Hawaiian lands, especially our most sacred lands. We remain committed and steadfast in protection of Maunakea. We have never and will never consent to the construction of the Thirty Meter Telescope on Maunakea. Ua mau ke ea o ka ʻāina i ka pono.”

In a statement issued by the Office of Hawaiian Affairs, Chair Carmen Hulu Lindsey – who was also one of those arrested that day in 2019 – said the OHA is grateful for the pono outcome.

“We extend our deepest aloha to all 38 kūpuna who were arrested for engaging in peaceful, nonviolent protest on that fateful day in July of 2019, and to all nā kiaʻi who have stood in kapu aloha against the continual disregard of Native Hawaiians’ legitimate concerns for our sacred spaces and our ‘āina aloha,” the Lindsey statement read. “The 2019 arrests and today’s ruling highlight just another example of how Native Hawaiians have had to continually place their bodies and lives on the line, to protect that which serves as the foundation of our cultural identity and well-being. We look forward to the day when state decisionmakers understand and take seriously the cultural concerns and deep harms that are uniquely felt by Native Hawaiians, arising from government actions impacting the ʻāina and our deeply valued biocultural resources.”

“In the meantime, OHA will continue to seek to hold the State of Hawaiʻi and the University of Hawaiʻi accountable for their longstanding and well-documented mismanagement of Maunakea, through our ongoing lawsuit and other channels of advocacy for the proper stewardship of this sacred mauna,” the OHA statement said.