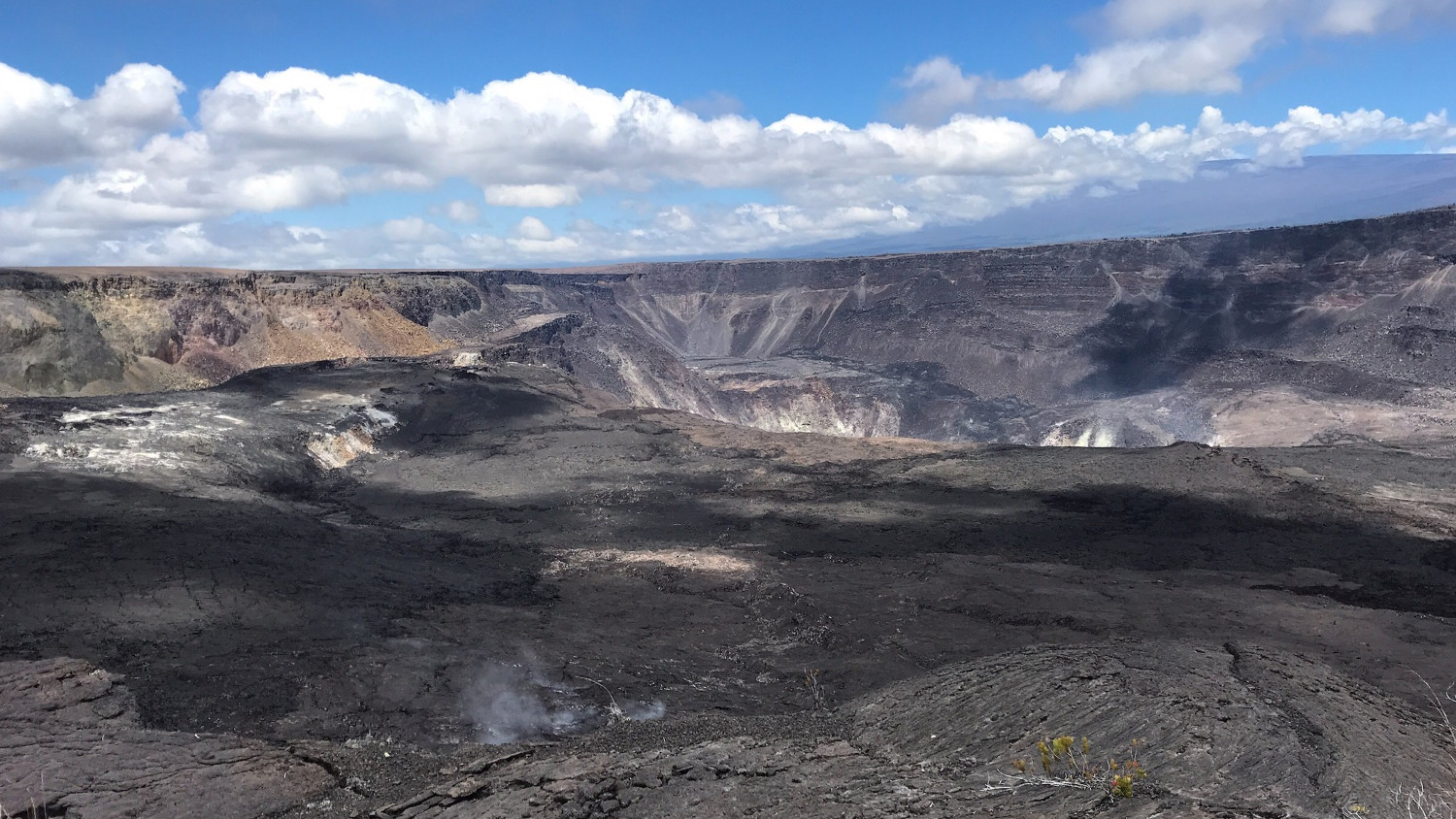 HAWAIʻI ISLAND - The USGS Hawaiian Volcano Observatory looks back on the explosive eruption that killed several hundred men, women, and children near the summit of Kīlauea volcano.

USGS: “A man measuring 6 feet 4 inches tall lies on a ballistic block that was thrown 1 km (half a mile) from the floor of Kīlauea caldera onto the northwest flank of the volcano probably during the 1790 eruption.” (USGS photo taken by D. Swanson)

(BIVN) – Kīlauea is not erupting, and its USGS Volcano Alert level is at ADVISORY.

“Seismicity persisted along the upper East Rift Zone this past week,” the U.S. Geological Survey Hawaiian Volcano Observatory reported in its weekly update. “Together with the geodetic monitoring, the observations suggest that the summit and upper East Rift Zone continue to be replenished with magma.” Scientists continue to say it is possible that the Halema‘uma‘u vent could resume eruption or that Kīlauea is entering a longer period of quiescence prior to the next eruption.

More people were probably killed by the 1790 eruption of Kīlauea than by any other eruption in what is now the United States. Several hundred men, women, and children perished during explosions at the summit of the volcano.

The deaths apparently occurred along a trail crossing the northwest flank of Kīlauea near Nāmakanipaio, when a ground-hugging surge of hot steam and rocks swept across the ground at high speed. Wet volcanic ash fell just before the lethal surge, and several hundred people left footprints in the ash beyond the limit of the surge.

How do we know this? No contemporary accounts exist. Brief summaries written in the 1820s were supplanted in 1843 by a much longer description written by Rev. Sheldon Dibble based on memories of old-timers that were assembled by students at Lahainaluna School. These accounts, though of unique value, have posed many volcanic questions subject to multiple interpretations ever since.

A field study to understand better the tragic events was made several years ago, and the results were published in 2015. This study identified most, or all, of the deposits left by the 1790 eruption and interpreted the kinds of explosions responsible for the deposits. Uncertainties remain, but the general picture mostly agrees with the sketchy early accounts and answers some of the important questions.

Three main explosions took place within hours, perhaps minutes, of each other, though they were apparently preceded by several days of smaller explosions. The first main explosion ejected wet ash that was transported southwestward by the trade wind. This ash deposit now contains the footprints of mainly women and children (as determined by foot size), who were mostly in the area southwest of the summit. About half of the footprints point back toward the summit. The ash remained wet when the following two explosions occurred.

The next explosion was the largest. Its column of ash rose 12–15 km (40,000–50,000 ft) above the volcano as interpreted from physical characteristics of the deposit, and marooned sailor John Young in Kawaihae noted the column in his ledger. The ash rose high into the jet stream and spread southeastward at least to Kaimu, more than 30 km (19 mi) distance. Around the summit, the erupted material is of sand and gravel size, much coarser than the far-flung ash.

The third explosion produced the lethal surge that sped across the summit’s western flank. This explosion may actually be a late or even end stage of the preceding explosion, as the towering eruption column collapsed under its own weight. The falling hot debris hit the ground and surged downslope, trapping people on the trail. Death would have been quick, but not before some victims grabbed onto one another to keep from being blown away by the hurricane-force surge. All in all, a gruesome scene, but one that occurs all too often today at explosive volcanoes around the world.

What caused the explosions? For years geologists assumed that groundwater heated to steam powered them, but this attractive interpretation lacks definitive evidence. The wet nature of the first explosive ash supports this idea. Another possibility is that gas leaving magma was trapped underground briefly, pressurizing and finally bursting out. Such a process drove a small explosion in Halemaʻumaʻu in 2008. But again, definitive evidence is missing.

The explosive deposits consist mostly of solid rocks broken from the wall of the eruptive conduit. No pumice or bubble-rich glassy ash has been found. Relatively dense glass forms a few small chunks and sticks to the sides of some large blocks. Such dense glass indicates the presence of magma, but it was not bubbling and so may have already lost some of its gas before eruption.

Did part of the caldera collapse in 1790? Many geologists assume so, but field work has found no clear evidence for collapse. It is a reasonable interpretation, but we cannot yet demonstrate it.

Some geologists assign an age of 1790 to a lava flow in lower Puna, but that is an interpretation, not an observation. If the flow were indeed erupted in 1790, then, by analogy with the 2018 eruption, one could hypothesize that its eruption drained the summit magma reservoir, causing the summit to collapse and triggering explosive eruptions. An appealing story, to be sure, but speculative.

With all we’ve learned, there’s a long way to go to understand completely Kilauea’s most lethal eruption. But one thing is clear: large explosions can happen again.