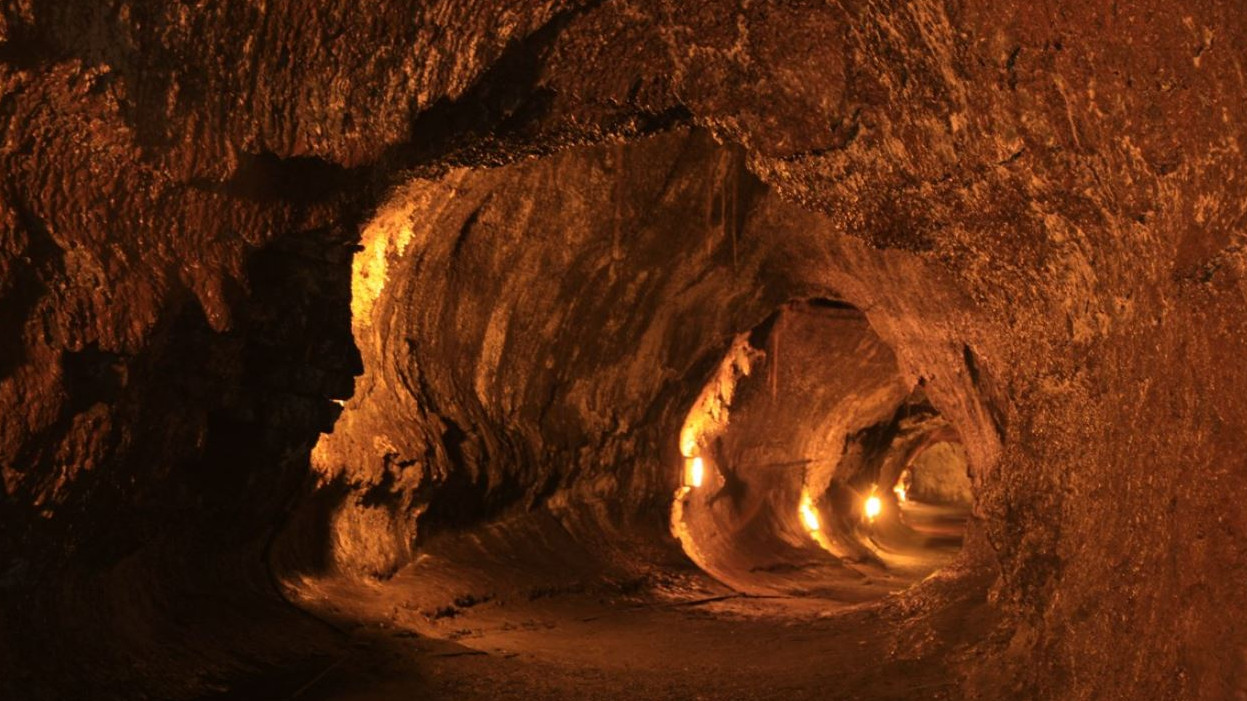 A photo taken from within Nāhuku (Thurston Lava Tube), near the summit of Kīlauea. This lava tube was formed during the ‘Ailā‘au eruption in the 15th century, efficiently transporting lava over great distances with minimal heat loss. NPS photo by D. Boyle.

HAWAIʻI ISLAND - During the 60 year eruption, ‘Ailā‘au lava flows covered most of the Puna District north of the East Rift Zone of Kīlauea.

The 2018 lower East Rift Zone and 35-year-long Puʻuʻōʻō eruptions of Kīlauea had large impacts on the Puna District. Many residents were deeply affected by devastating lava flows, earthquakes, gas emissions, and other volcanic hazards. However, it is important to note that these eruptions are dwarfed compared to some past Kīlauea eruptions including the largest identified subaerial flow—‘Ailā‘au.

Kīlauea volcano alternates between periods dominated by lava flows, such as the one we are currently in, and periods of explosive activity. About 1000 years ago, effusive eruptions broke a 1200-year-long period of predominantly explosive activity. During this time, lava flows accumulated on the floor of the Powers caldera—the predecessor of the present-day caldera at Kīlauea summit. Eventually, lava filled and started to overflow the caldera, forming two large shields where the caldera had been.

Shortly after the shield formation ended in approximately 1400, lava erupted from a vent on the eastern-most shield, near the eastern end of Kīlauea Iki crater—commencing the ‘Ailā‘au eruption.

The eruption is estimated to have lasted about 60 years during which time about 430 square kilometers (166 square miles) of land was covered by pāhoehoe lava flows. For comparison, the 2018 lava flow covered less than one tenth of this area and the longer-lived Puʻuʻōʻō flows covered about one third.

The main ‘Ailā‘au lava flows advanced to the east and covered most of the Puna District north of the East Rift Zone of Kīlauea, leaving numerous kīpuka of older lava within the flow field. A large number of communities within the Puna District are built mainly, or entirely, on ‘Ailā‘au flows, including, Mauna Loa Estates, Fern Acres, Fern Forest, Hawaiian Acres, Mountain View, Orchidlands Estates, Hawaiian Paradise Park, ʻĀinaloa, and much of Hawaiian Beaches. The Kahauale‘a Natural Area Reserve and the Puna Forest Reserve are also covered in large part by this flow.

The majority of the lava was transported away from the ‘Ailā‘au vent by an extensive lava tube network which formed during the eruption. When the eruption ended, much of the lava within the tube drained away, leaving natural subsurface caves. The most well-known tube system, Kazumura cave, is the longest identified continuous lava tube in the world. It starts near Kīlauea summit and extends almost to the coast, near Kaloli Point, about 40 km (25 mi) away. It also has the largest vertical drop of any lava tube, descending approximately 1100 m (3,600 ft) in elevation between the upper and lower extents.

Numerous skylight entrances into Kazumura cave have provided access for scientists, spelunkers, and other curious minds. The complexity of lava tube formation is apparent in the braided tubes, multiple level (stacked) tubes, lava falls, thermal erosion, and many other geologic features preserved within the cave. Lava tubes, including Kazumura, are also home to many Hawaiian cultural sites that are protected by the State of Hawaii. Combining that with the unique biology of lava tubes, these fragile ecosystems and archaeological sites should be respected.

Although Kazumura is the main tube system that transported lava during the eruption, there were many shorter lava tube sections that formed in the ‘Ailā‘au flow field. One example, near the ‘Ailā‘au vent, is Nāhuku (Thurston Lava Tube) on Crater Rim Drive in Hawai‘i Volcanoes National Park.

In addition to the main flow field to the east of the vent, a small portion of the lava flow was directed south, where it eventually entered the ocean from Keahou Landing to east of Apua point.

The ‘Ailā‘au eruption has been studied, mapped, and dated using radiocarbon data, in order to estimate the duration, area, and lava flow volume. The eruption has also been documented in many stories and Hawaiian chants about Pele and Hi‘iaka.

Based on the age ranges of the flows from radiocarbon dating, the formation of Kīlauea’s present-day caldera, either abruptly ended, or took place shortly after, the ‘Ailā‘au eruption. How the caldera formed in about 1500 is still poorly understood, having more questions than answers about what triggered the caldera collapse.

Kīlauea has a mixed history of explosive and effusive eruptions, with a wide range in duration and size. Because of the profound effect these eruption behaviors can have on our island, the U.S. Geological Survey’s Hawaiian Volcano Observatory continues to study past and present eruptions to better understand Hawaiian volcanoes and their hazards.