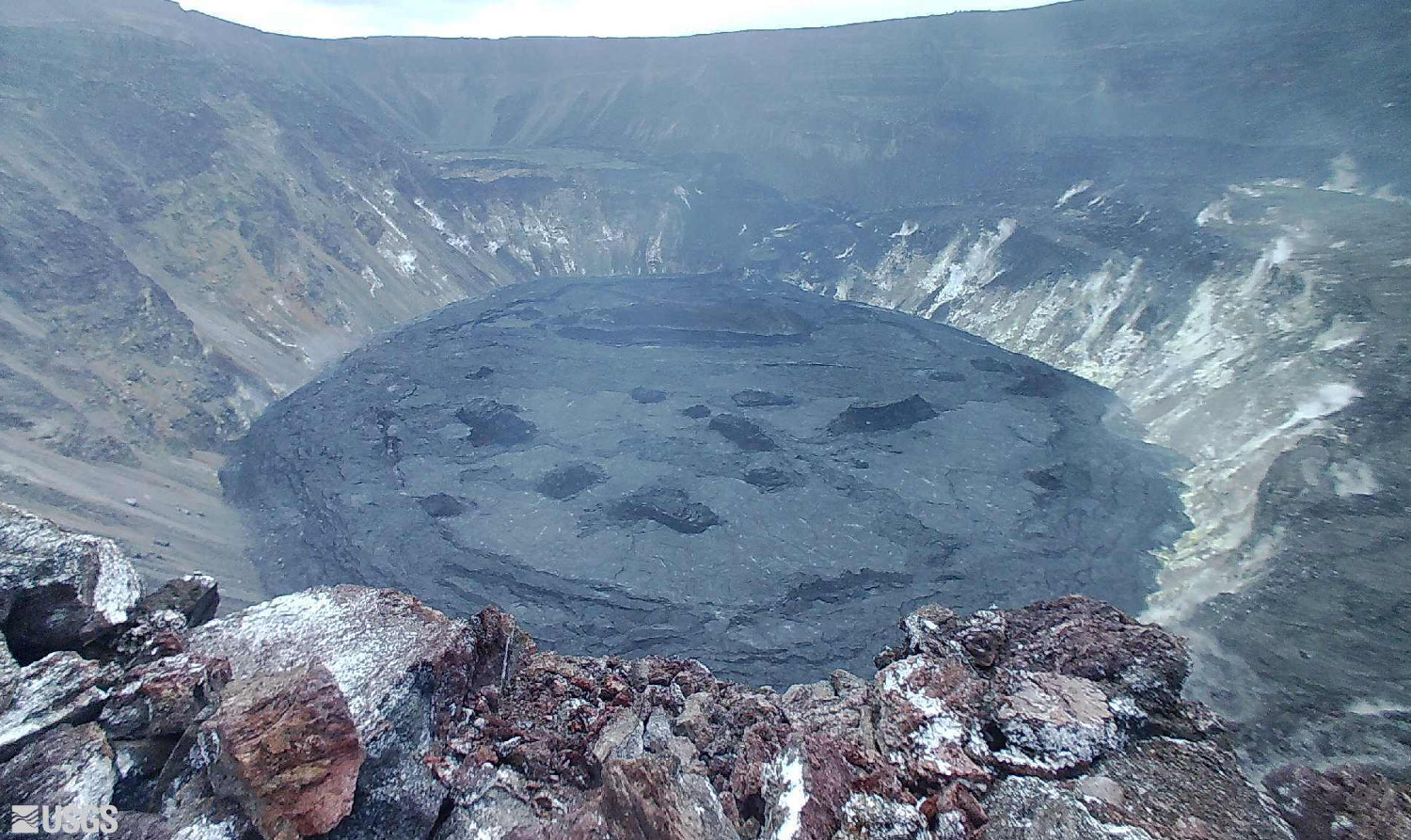 (BIVN) – Kīlauea volcano is not erupting, and on Wednesday there was a decrease in the rate of earthquakes recorded during the swarm that began on August 23.

The USGS Hawaiian Volcano Observatory wrote about the changes that continue to occur in the Kīlauea summit region in a 9:23 a.m. HST update. “This morning, August 25, the change in ground deformation of Kīlauea’s summit region persists,” scientists wrote, “along with elevated seismic activity 1-2 km (0.6-1.2 mi) below the surface of the southern part of Kīlauea’s summit caldera; however, rates have decreased over the past 12 hours. Other monitoring data streams, including sulfur dioxide emission rates and webcam views, do not show changes.”

On Tuesday, the volcano alert level/aviation color code for Kīlauea was raised from ADVISORY/YELLOW to WATCH/ORANGE.

Elevated seismicity, which began at approximately 4:30 p.m. HST on August 23, continues beneath the south part of Kīlauea’s summit caldera, within the closed area Hawaiʻi Volcanoes National Park. Within the past 24 hours, over 275 earthquakes have been detected; the rate of earthquakes detected per hour peaked at 28 events detected between 7 and 8 p.m. HST on August 24. Rates of earthquakes have decreased over the past 12 hours, over which time about 75 earthquakes have been detected at a rate of 5-12 events per hour. Most of the earthquakes are between magnitude 1 and 2 and are occurring approximately 1-2 km (0.6-1.2 mi) below the surface. Over the past 24 hours, summit tiltmeters have continued to record a change in the rate and style of ground deformation in the summit region, with a slight decrease in rate overnight. These observations suggest that magma may be continuing to be supplied beneath the surface of the south part of Kīlauea’s summit caldera, though at a decreased rate over approximately the past 12 hours.

SO2 emission rates remain at very low levels that have persisted since May 2021, when the most recent summit eruption ended. Concentrations of SO2 in ambient air, measured at stations in the Kīlauea summit region, show no changes associated with the increased earthquake activity and ground deformation rates. The most recent sulfur dioxide (SO2) emission rates, measured on August 12, were 50 tonnes per day, close to levels associated with the non-eruptive period from late 2018 to late 2020 (less than 50 tonnes per day). This is significantly lower than emission rates that averaged over 800 tonnes per day from mid-February to mid-April when the summit eruption of Kīlauea was ongoing.

In a rare comment on the Southwest Rift Zone, which leads towards the Kaʻū side of Kīlauea, scientists noted “no unusual activity noted in the region. No indication of activity migrating into the region.”

On Twitter, the USGS commented that previous intrusions in this area have shown “magma can follow this trend south out of the caldera and then to the southwest”.

At the summit, USGS says “there is no indication of Halema‘uma‘u vent resuming eruption.”

Also, no unusual activity has been noted in the East Rift Zone region. “No indication of activity migrating into the region,” USGS HVO wrote. “Ground deformation monitors indicate that the upper East Rift Zone – between the summit and Puʻuʻōʻō – is refilling at rates similar to those measured over the past 2 years and before the December 2020 – May 2021 eruption in Halemaʻumaʻu.”