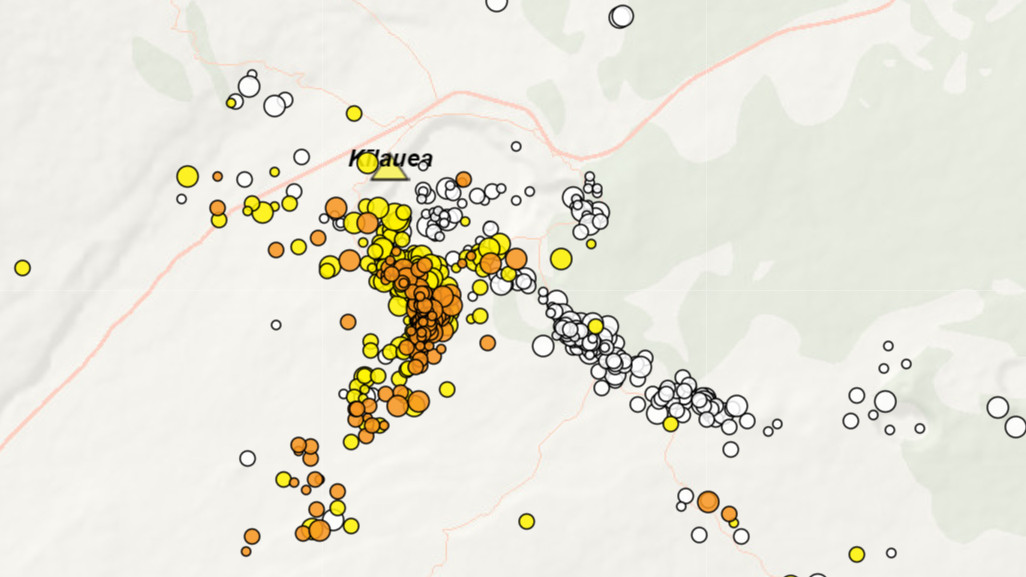 Image of interactive map by USGS showing the lovation of the recent earthquake swarms near the summit of Kīlauea.

Another Pulse Of Earthquakes Recorded Under Kilauea Summit

HAWAIʻI VOLCANOES NATIONAL PARK - A second period of increased earthquake activity and ground deformation was observed near the Kīlauea summit on Thursday evening.

(BIVN) – Renewed earthquake and deformation activity was observed at Kīlauea summit region following a brief toggle of the USGS Volcano Alert Level from ADVISORY to WATCH and then back to ADVISORY.

Scientists with the US Geological Survey’s Hawaiian Volcano Observatory had just posted a detailed Volcano Watch  article examining the magma intrusion, when the activity began to increase again.

This new USGS Kīlauea Information Statement was released on Friday:

Kīlauea volcano is not erupting. The US Geological Survey’s Hawaiian Volcano Observatory (HVO) detected a resumption in earthquake activity and ground deformation beneath the south part of Kīlauea summit caldera, within Hawaiʻi Volcanoes National Park. The rate of ground deformation began increasing again around 6:00 p.m. HST on August 26 and was followed by increased earthquake activity after 8:30 p.m. The renewed activity occurred in approximately the same location as the August 23-25 earthquake swarm—within and south of Kīlauea caldera. The combination of these observations indicate a second pulse of intrusive activity.

As of this statement, both earthquake and ground deformation rates in Kīlauea’s summit region appear to be decreasing. In addition, there has been no indication of upward migration of earthquakes toward the surface or change in deformation that would indicate shallowing of the source intrusive activity. Accordingly, Kīlauea’s Volcano Alert Level and Aviation Color Code remain at ADVISORY/YELLOW.

While the activity has slowed down as of the morning of August 27, additional intrusion pulses are possible. Any potential eruptive activity related to these events would be entirely within Hawaiʻi Volcanoes National Park and localized within undeveloped areas, well away from infrastructure such as roads. HVO continues to monitor this situation and will issue additional messages and Volcano Alert Level changes if warranted by changing activity.

This latest earthquake swarm has since tapered off and as of Saturday morning the activity appears to have settled down. Kīlauea remains at ADVISORY/YELLOW alert level.