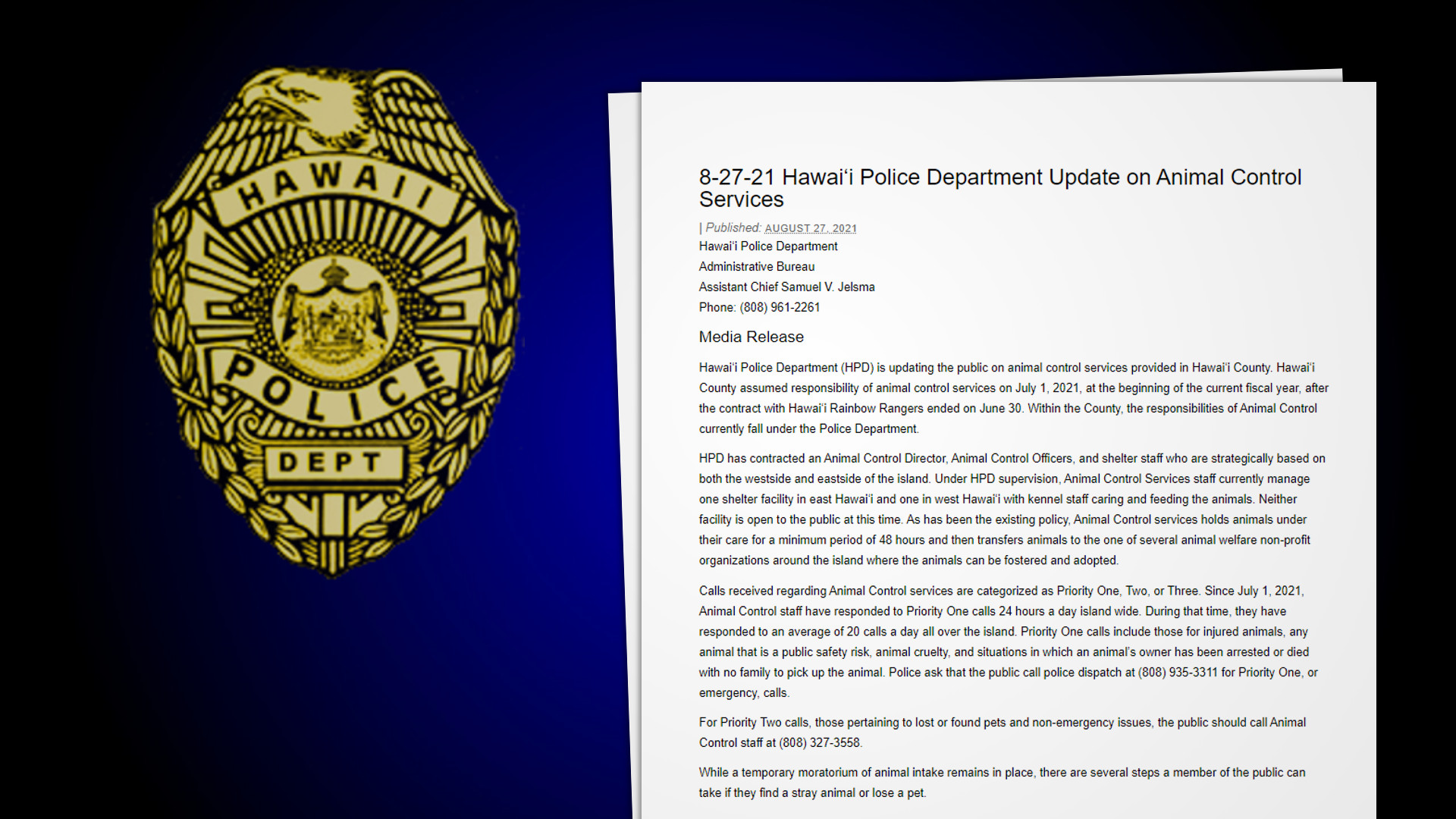 (BIVN) – The Hawaiʻi Police Department on Friday provided this update on animal control services on the Big Island, following the changes that were reported earlier this summer.

Hawai‘i Police Department (HPD) is updating the public on animal control services provided in Hawai‘i County. Hawaiʻi County assumed responsibility of animal control services on July 1, 2021, at the beginning of the current fiscal year, after the contract with Hawai‘i Rainbow Rangers ended on June 30. Within the County, the responsibilities of Animal Control currently fall under the Police Department.

HPD has contracted an Animal Control Director, Animal Control Officers, and shelter staff who are strategically based on both the westside and eastside of the island. Under HPD supervision, Animal Control Services staff currently manage one shelter facility in east Hawai‘i and one in west Hawai‘i with kennel staff caring and feeding the animals. Neither facility is open to the public at this time. As has been the existing policy, Animal Control services holds animals under their care for a minimum period of 48 hours and then transfers animals to the one of several animal welfare non-profit organizations around the island where the animals can be fostered and adopted.

Calls received regarding Animal Control services are categorized as Priority One, Two, or Three. Since July 1, 2021, Animal Control staff have responded to Priority One calls 24 hours a day island wide. During that time, they have responded to an average of 20 calls a day all over the island. Priority One calls include those for injured animals, any animal that is a public safety risk, animal cruelty, and situations in which an animal’s owner has been arrested or died with no family to pick up the animal. Police ask that the public call police dispatch at (808) 935-3311 for Priority One, or emergency, calls.

For Priority Two calls, those pertaining to lost or found pets and non-emergency issues, the public should call Animal Control staff at (808) 327-3558.

While a temporary moratorium of animal intake remains in place, there are several steps a member of the public can take if they find a stray animal or lose a pet.

People who find healthy stray animals are encouraged to have the animal scanned for a microchip by a County of Hawai‘i Animal Control Officer, at a veterinarian’s office, or by a local rescue group. HPD has provided guidance to veterinarian offices on island about protocols regarding lost and found healthy animals. If a found animal is microchipped, veterinarians can try to find its owner by searching for microchip on www.found.org.

People who find a healthy stray animal or who lose a pet are encouraged to post it as lost / found on (the website Petco Love). Petco Love Lost is a new, searchable national database that uses patented facial recognition technology to make finding lost pets quicker and easier. This simple-to-use tool will be easily accessible to participating animal organizations nationwide, as well as any pet parent or person who finds a lost pet. Uploaded photos of a missing dog or cat are immediately scanned to determine whether the lost pet is at a participating shelter or with a neighbor in the community. There are a handful of organizations across the island using this technology, including County of Hawai‘i Animal Control Services, Hawai‘i Animal Kuleana Alliance, and Hawai‘i Island Humane Society.

Dog licensing is being managed by the County Finance Department, Vehicle Registration and Licensing Division. Starting September 8, 2021, dog owners can download the dog license application on the County website, www.hawaiicounty.gov, under the Finance Department. Dog owners can mail the form, including the owner’s name, mailing address, and dog’s microchip number, along with license fee, to the Department of Finance, Vehicle Registration and Licensing Division, 101 Pauahi St, Suite 5, Hilo, HI, 96720. Dog license applications are only being processed by mail. Dog license fees have not increased and remain $2.10 for sterilized dogs and $6.10 for unsterilized. Those with questions about dog licensing can call the Department of Finance at (808) 961-8413.

The information included in this release will also be posted on the Hawai‘i Police Department’s website under Animal Control Services. Hawaiʻi Police Department would like to thank Hawai‘i Island residents for their patience during this transition period. The department also thanks the animal welfare organizations around the island that have assisted with animal transfers and fostering during this time.