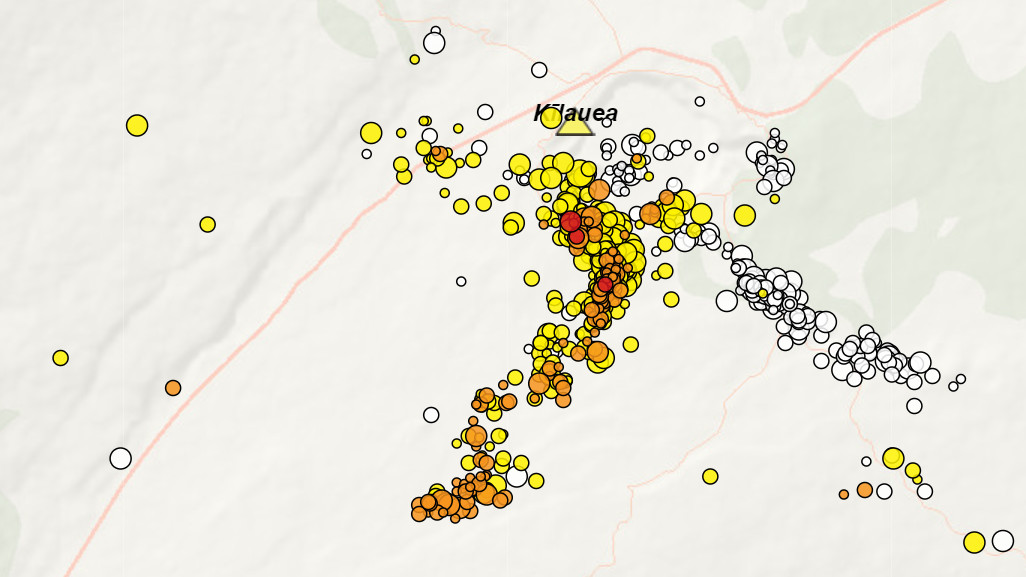 Image from interactive map by USGS showing the location of the recent earthquake activity near the summit of Kīlauea as of Monday evening.

HAWAIʻI VOLCANOES NATIONAL PARK - Scientists say the activity at Kīlauea’s south summit region continues, though at a lower rate than what has been seen in earlier intrusive pulses.

(BIVN) – Kīlauea volcano is not erupting, and on Monday scientists provided another update on the recent signs of increased activity in the summit area.

The USGS Hawaiian Volcano Observatory reports the “intrusive activity that began on August 23 continues south of Kīlauea caldera. Ground deformation in Kīlauea’s south summit region continues, though at a lower rate than what has been seen in earlier intrusive pulses over the past week.”

The USGS says the current earthquake activity “remains low compared to the earlier pulses of this intrusive activity.”  From today’s update:

Observations over the past 24 hours suggest that magma continues to be supplied to the ongoing intrusion beneath the area south of Kīlauea’s summit. However, the current rate of ground deformation in Kīlauea summit region, within Hawaiʻi Volcanoes National Park, is significantly lower than the  rates seen in the first intrusive pulse spanning August 23-25 and the initial rates of the second intrusive pulse beginning on August 26.

At the time of this statement, activity continues but there is no indication of upward migration of earthquakes toward the surface or change in deformation that would indicate shallowing of the source intrusive activity. Accordingly, Kīlauea’s Volcano Alert Level and Aviation Color Code remain at ADVISORY/YELLOW.