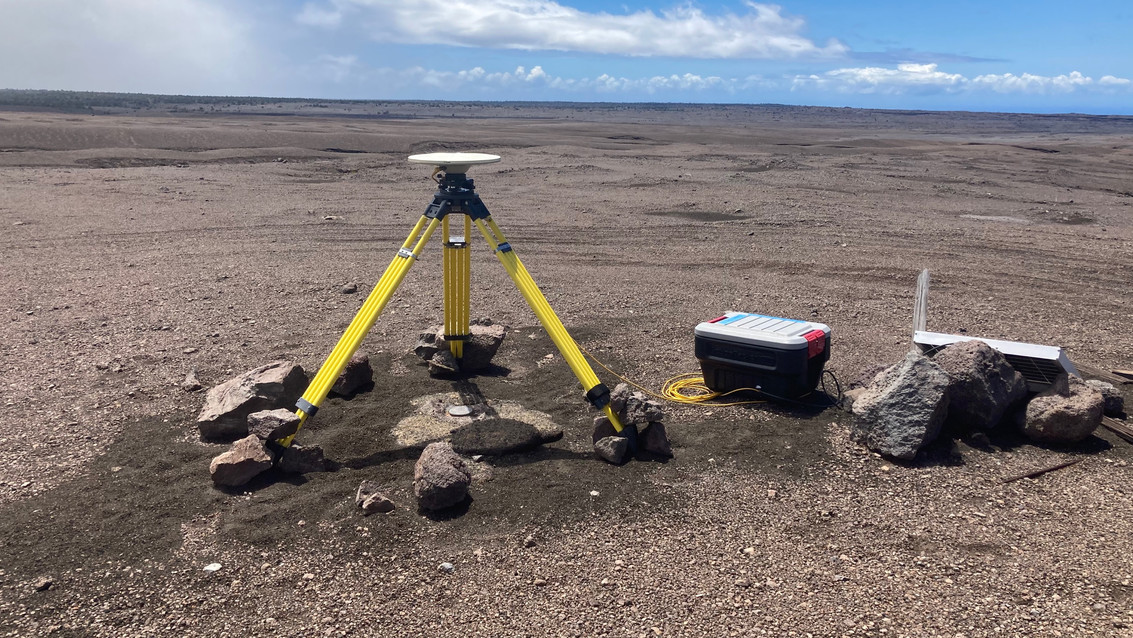 USGS: "On Wednesday, August 25, 2021, an HVO scientist deployed Global Positioning System (GPS) sites in an area just southwest of Kīlauea caldera. The tripod and attached GPS antenna are centered over a benchmark and data are collected to calculate the vertical and horizontal ground motion at that location. These temporary sites were set up at pre-existing benchmarks to supplement HVO’s continuous GPS stations during the intrusion to the southwest of Kīlauea’s summit caldera." USGS photo taken by S. Conway.

HAWAIʻI VOLCANOES NATIONAL PARK - The latest observations "suggest that new magma supply to the intrusion below the surface south of Kīlauea’s summit caldera has slowed or stopped." 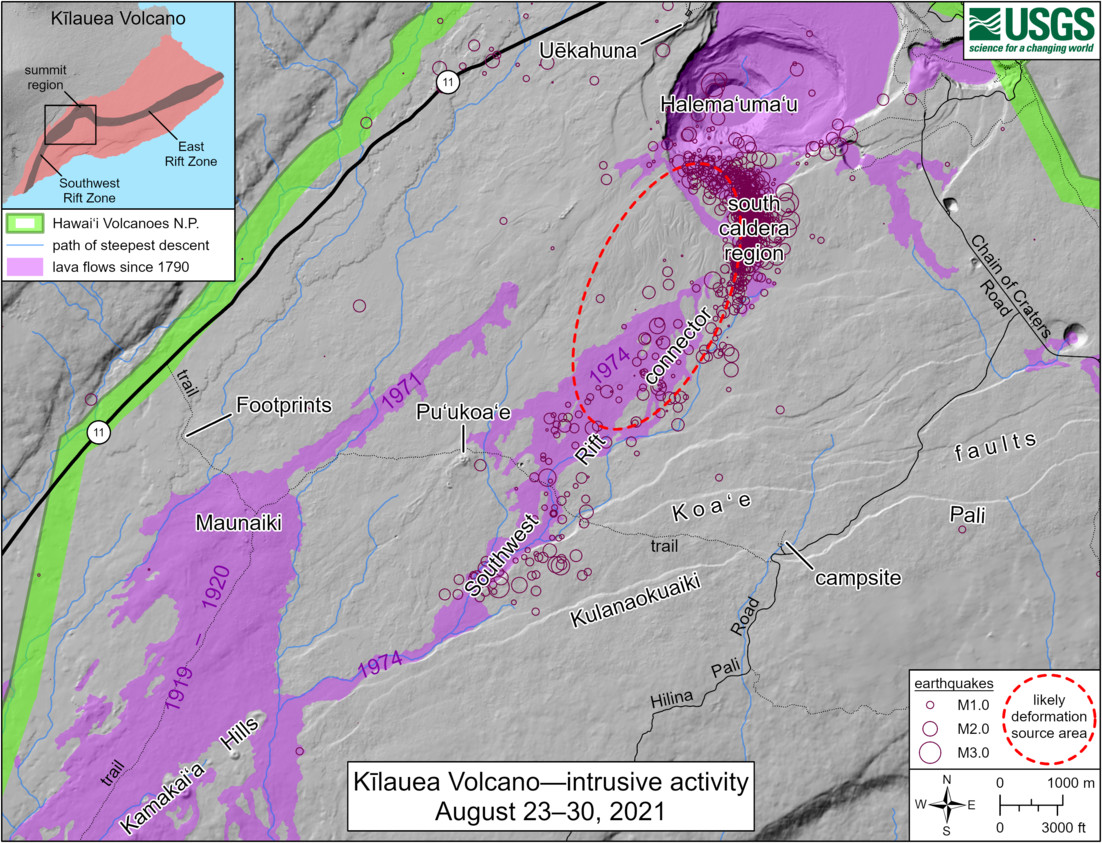 USGS: “This map depicts the detected intrusive activity over the past week at Kīlauea Volcano. The initial swarm of small earthquakes from August 23–25 was centered in the south caldera region, as labelled on the map. A second swarm started late on August 26 in the same area; earthquake counts dropped the following day, but they have remained above background levels and epicenters have shifted further away from the caldera into the Southwest Rift connector. Ground deformation, as measured by tiltmeters and GNSS (GPS) instruments, appears to be focused within the dashed ellipse on the map. The Southwest Rift connector―also labelled on the map―is an underground passageway for magma into the Kīlauea Southwest Rift Zone, and for decades it has been a known source area for seismicity. The connector region is offset to the southeast from the main lineament of eruptive vents marking the Southwest Rift Zone, as evidenced by the 1971 eruptive vents and 1919–1920 Maunaiki lava shield on the map. Eruptions from the connector itself are thought to be rare, though a brief but spectacular eruption occurred in this area on December 31, 1974, producing a lava flow that travelled more than 12 km (7.5 mi) to the southwest.”

(BIVN) – It appears new magma supply to the intrusion below the surface south of Kīlauea’s summit caldera has slowed or stopped, scientists say.

Kīlauea volcano is not erupting, and after a recent uptick in activity that prompted a raise in the Volcano Alert Level from ADVISORY to WATCH for a brief time, things have settled down.

“Earthquake rates beneath the southern part of Kīlauea’s summit caldera and extending to the southwest have decreased over the past 24 hours,” the USGS Hawaiian Volcano Observatory reported on Tuesday. “Ground deformation in Kīlauea’s summit region associated with the intrusion has ceased since yesterday afternoon, August 30. Other monitoring data streams, including sulfur dioxide emission rates and webcam views, do not show changes.”

Currently, there is no indication of Halema‘uma‘u vent resuming eruption, the USGS says. There is also no unusual activity noted in the East Rift Zone. 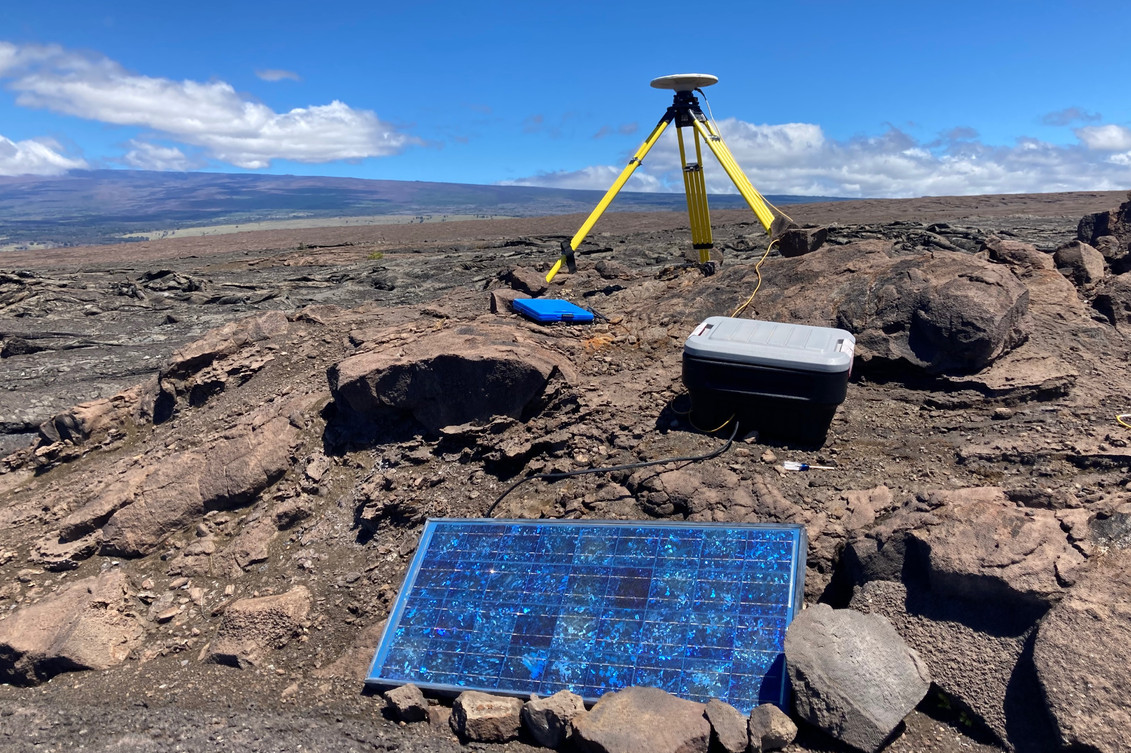 USGS: “A temporary Global Positioning System (GPS) site was set up to the south of Kīlauea’s summit caldera to measure vertical and horizontal ground motion during the intrusion last week. A solar panel (bottom center) provides power to the instrument as it collects data. With permission and in coordination with Hawai‘i Volcanoes National Park, this GPS site was deployed in an area that remains close to the public due to safety reasons. The Northeast Rift Zone of Mauna Loa is visible in the background.” USGS photo taken by S. Conway on August 25, 2021.

From the USGS observations report:

Within the past 24 hours, 33 earthquakes have been detected beneath the surface within and southwest of Kīlauea’s summit caldera, and extending to the Koa‘e fault zone. Most of the earthquakes are below magnitude 2 and are occurring approximately 1-4 km (0.6-2.5 mi) below the surface. Summit tiltmeters continued to record inflation and a change in the style of ground deformation until approximately noon yesterday, August 30, after which ground deformation associated with this event ceased. These observations suggest that new magma supply to the intrusion below the surface south of Kīlauea’s summit caldera has slowed or stopped.