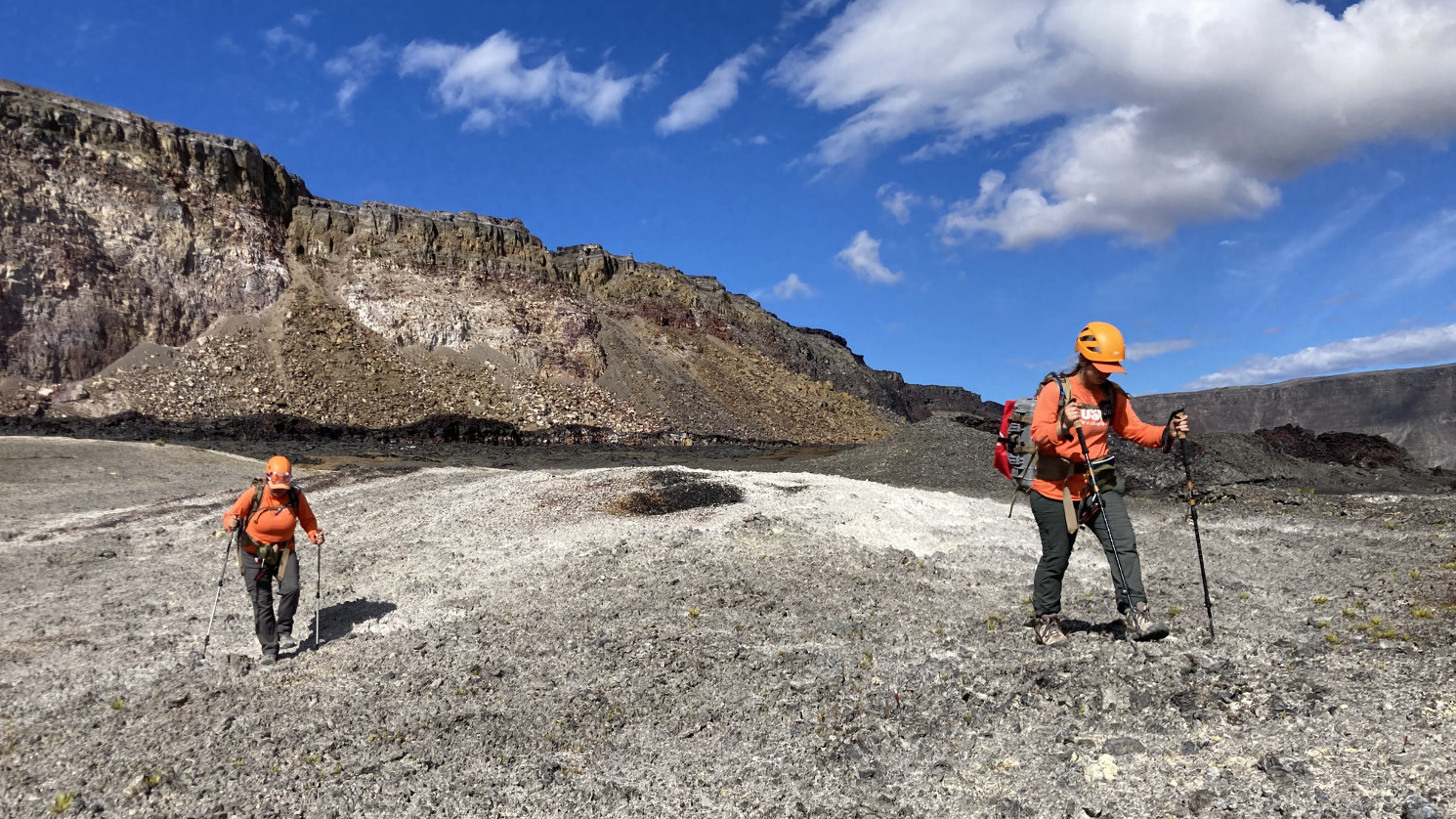 USGS: "Two HVO scientists traverse the down-dropped block of Kīlauea’s caldera with MultiGAS instruments for measuring volcanic gases. Rising gases interact with and alter surrounding rocks, resulting in the light-colored ground the scientists are walking on." (USGS photo by K. Mulliken on July 22, 2021.)

HAWAIʻI VOLCANOES NATIONAL PARK - Scientists this summer conducted a detailed gas survey of the Kīlauea caldera in order to understand the distribution of current emissions. 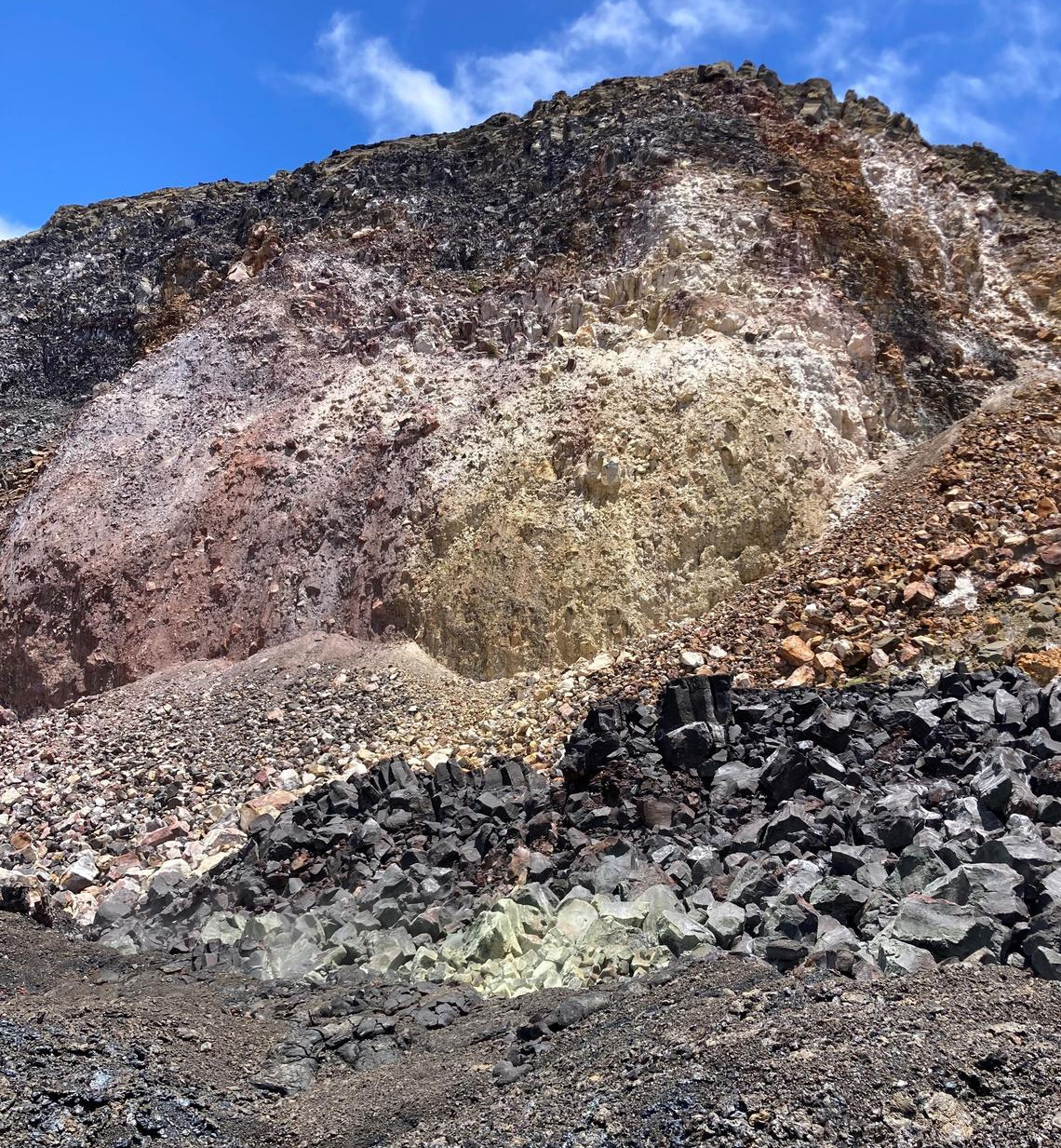 USGS: “On the north margin of the south sulfur bank, which was exposed during the Kīlauea summit collapse events in 2018, light-colored deposits are evidence of the ongoing alteration from volcanic gas emissions. Near the bottom of the photo, bright yellow sulfur deposits, which are a stark contrast to the darker gray basalt rocks, are further evidence of ongoing gas emissions in the area.” (USGS photo by K. Mulliken on August 3, 2021.)

(BIVN) – Kīlauea is not erupting, and its USGS Volcano Alert level is at ADVISORY.

The volcano has been quiet following the recent intrusion of magma beneath the surface in the area south of Kīlauea caldera. Scientists say other monitoring data streams, including sulfur dioxide emission rates and webcam views, show no significant changes.

Large quantities of volcanic gases, such as carbon dioxide (CO2), sulfur dioxide (SO2), and hydrogen sulfide (H2S), are released into the atmosphere during volcanic eruptions. But even between eruptions, smaller amounts of the same gases continue to escape and can provide important clues about the current state of the volcano and the underlying magma. But to measure them, you first must identify where gas is coming from.

Surveys of the gas emissions from the Kīlauea caldera have been done in the past but never of the entire caldera at one time. And none had been done after the 2018 eruption and collapse events — at least not until this year.

Over the summer of 2021, USGS Hawaiian Volcano Observatory (HVO) scientists conducted a detailed gas survey of the caldera floor and rim in order to understand the distribution of current emissions. The results will be compared to previous surveys; if differences are detected, they may indicate that the plumbing system of Kīlauea’s summit has changed because of the 2018 collapses.

Measurements of volcanic gases can be done using a MultiGAS instrument, which pumps in air and then records the concentrations of CO2, SO2, and H2S, plus water vapor, in parts per million (ppm).

These MultiGAS instruments can be permanently stationed at an area of interest, strapped to a backpack frame, or mounted on a UAS (Unoccupied Aircraft Systems), depending on the location and type of data needed.

For the gas mapping that occurred in the Kīlauea caldera this summer, two MultiGAS instruments were mounted on backpack frames and HVO scientists walked transects in and around the caldera while continuously collecting data. These lines were spaced 25 to 50 meters (75-150 feet) apart and covered areas of the caldera rim, the caldera floor, and the down-dropped block that collapsed during the 2018 eruption.

Even though the survey covered the whole caldera floor, there were also clues that hinted where the best spot to focus on would be. Often gas emissions are concentrated along cracks or holes in the ground which provide the gas an easy path to the surface. Visible plumes can be seen in various parts of the caldera floor and at the Haʻakulamanu (Sulphur Banks) and Steam Vents areas in Hawaiʻi Volcanoes National Park. Visible plumes of gas like this are often good indicators of where the gas concentrations may be elevated.

As gases rise towards the surface from the magma below, they interact with and alter the rocks in the area, resulting in color changes. Looking for this altered rock is another way to identify areas that may have elevated gas emissions.

The scientists also collected gas samples from areas that had elevated concentrations of CO2 for later laboratory analyses. A large, plastic syringe was used to collect the sample which was then transferred to a foil bag designed for holding gas. The majority of the samples were collected on the down-dropped block, as that area showed the highest concentrations of CO2. 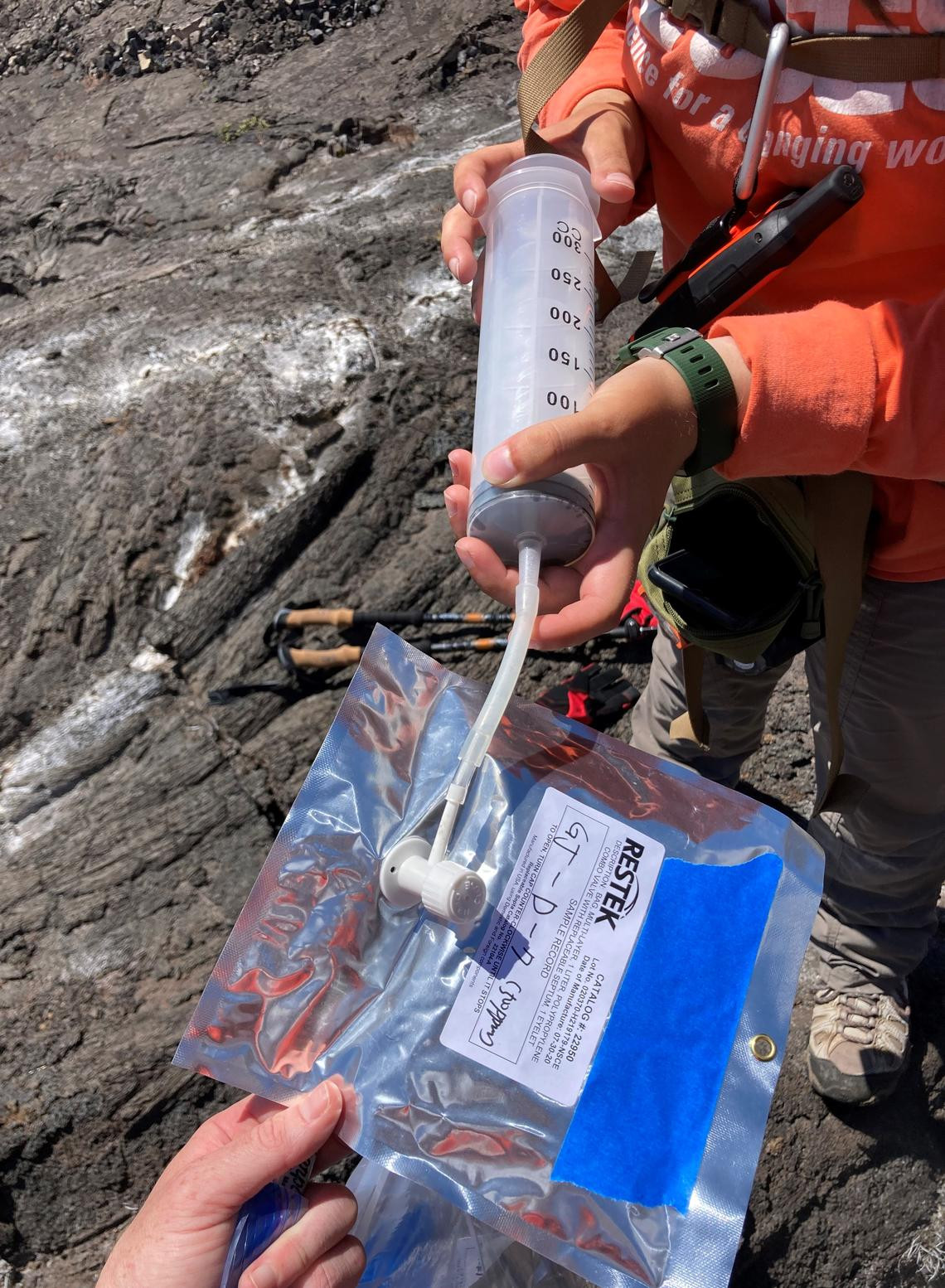 USGS: “An HVO scientist uses a syringe to capture a sample from an area within Kīlauea caldera that was identified as emitting elevated levels of the volcanic gas carbon dioxide. The sample is transferred to a gas sample bag, which will later be taken to a lab for chemical analyses.” (USGS photo by K. Mulliken on August 3, 2021.)

Chemical analyses of the different forms (isotopes) of carbon in the CO2 from these samples can provide information about where the magma that is releasing these gases is located, and whether it is new, deep magma that has never degassed before, or older magma that had already been stored for some time in Kīlauea’s plumbing system.

While the caldera floor mapping is now complete, the walls and floor of Halemaʻumaʻu crater have not yet been mapped and are the site of many visible gas vents. These areas are impossible to traverse by foot, so the next step is to use a UAS-mounted MultiGAS to measure gases there, with permission of the National Park Service.

HVO scientists will produce a new map of gas emissions in Kīlauea caldera using the data collected this summer. The map will be key to determining if gas pathways from deep magma to the surface were changed by the collapses in 2018. An updated understanding of gas emission locations across the caldera is essential for HVO’s ongoing gas monitoring. This refined gas emission map will also provide a critical benchmark of gas sources and concentrations that can be monitored for anomalous behavior. The ability to detect changes could also potentially allow HVO to better prepare for eruptions in the future.