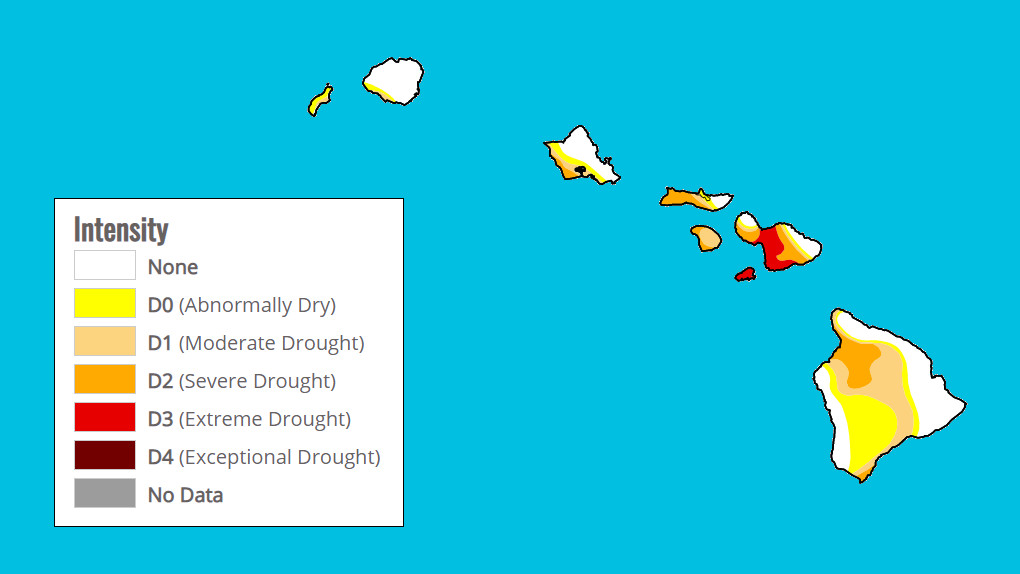 HAWAIʻI ISLAND - The portion of the South Kohala District burned by the record-breaking Mana Road fire in late July and early August has not been able to recover due to the lack of rain. 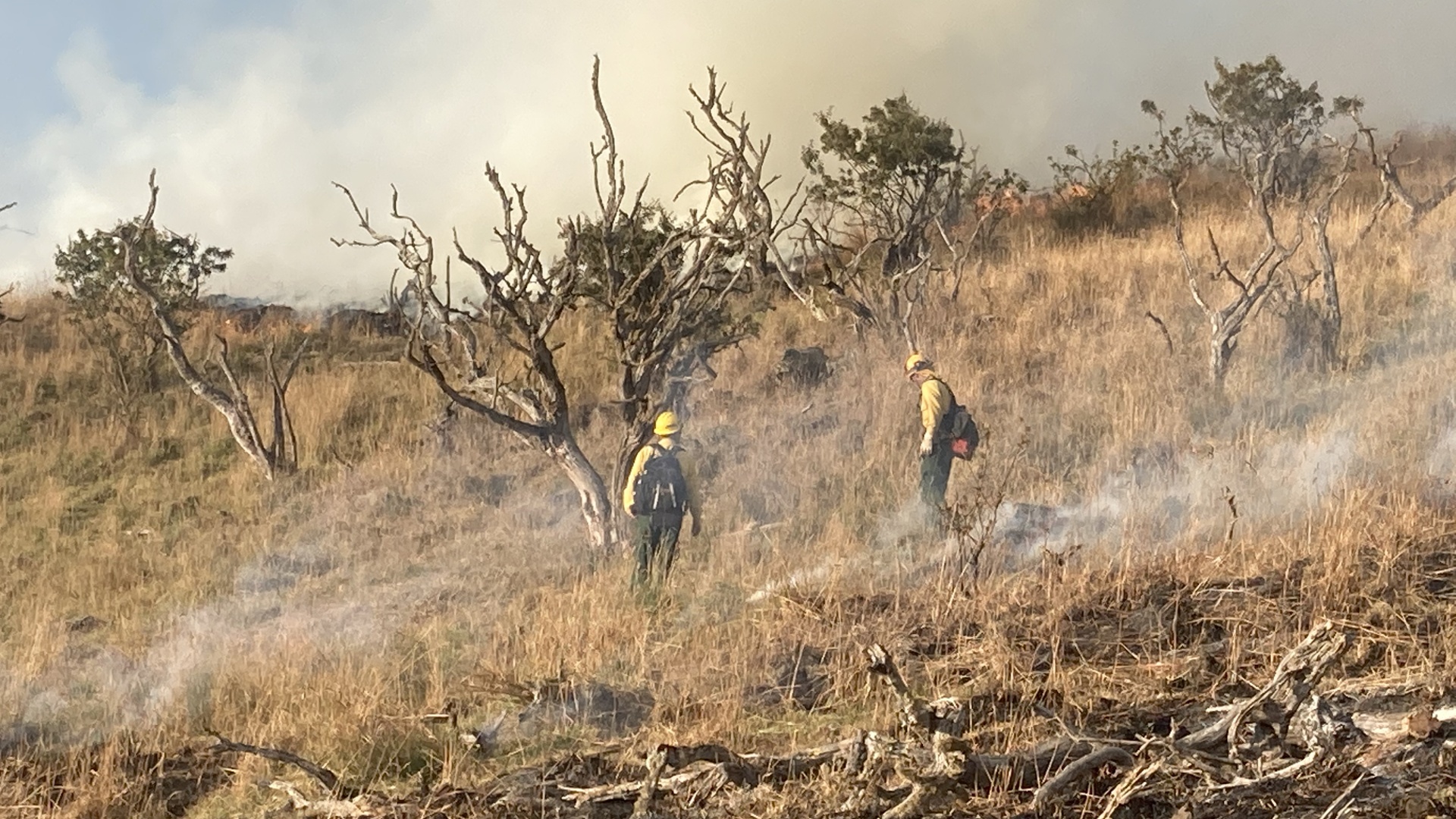 The statement notes that an increase in trade wind rainfall over the past six weeks has helped remove dryness along the windward slopes of the Big Island. Windward areas of all four counties in the state are drought-free. The Kona slopes region on Hawaiʻi island, has been able to avoid drought conditions over the past several months, due in part to its summer wet season.

From the statement’s “Summary of Impacts” for Hawaiʻi County:

A rancher operating in the South Point area reported deteriorating pasture conditions. The portion of the South Kohala District burned by the record-breaking brush fire in late July and early August has not been able to recover due to the lack of rain. The lack of grasses in the area is resulting in substantial top soil erosion due to periodic strong winds. Satellite-based vegetation health data also showed deteriorating rangeland conditions in the Humuʻula Saddle region of the island. 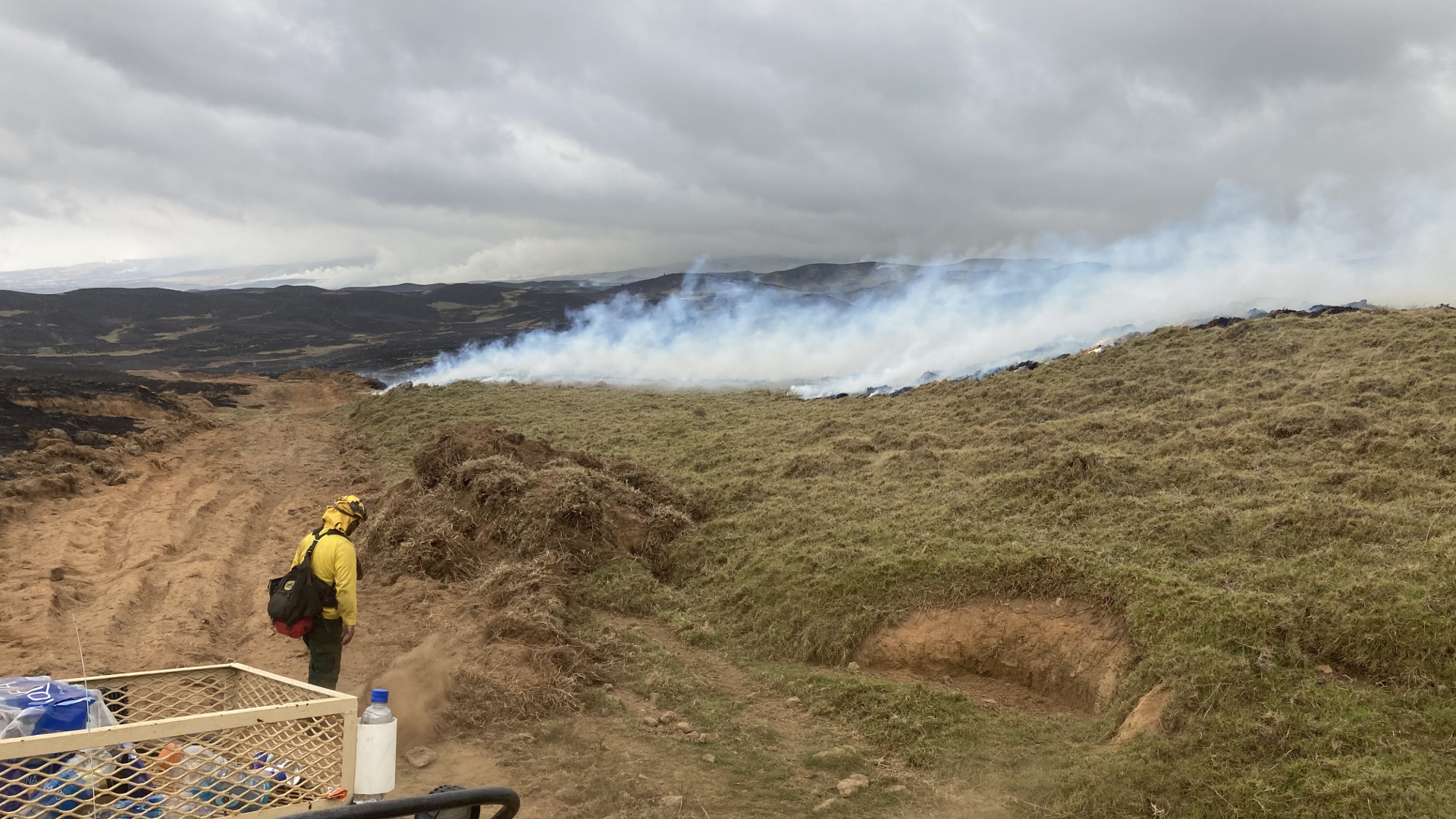 The Hawaiʻi Department of Land and Natural Resources recently shared video, examining the community effort in fighting the Mana Road fire, one of the largest wildland fires in recorded Hawai‘i history. In late July and early August, it scorched more than 42,000 acres of mostly grassland above Waimea and largely on the Parker Ranch.

“Over here on the west side of Hawai’i, we have a lot of what they call flashy fuels or grasslands that may have been forest years ago,” said Steve Bergfield, the Hawaiʻi DLNR Division of Forestry and Wildlife Hawaii Island Branch Manager. “But over time, they been converted to two grasslands. And if we’re in a saddle area, which Waimea is a saddle between Kohala mountain and Mauna Kea, it funnels the winds through those areas and the fire can move extremely quickly and it’ll spot ahead of itself making it move even faster.”

“What we want to do in the future is have better management when we start running into these large fires,” said Hawaiʻi Fire Department Chief Kazuo Todd. “We’re very used to dealing with several thousand-acre fires and working together very well for those. A 40,000-acre fire is not a several thousand-acre fire. It is vastly different. The Mana Road fire spanned over 62 and a half square miles. It’s about the size of 10% of the island of O‘ahu. When you have that many units spread over that much area, the ability to just know where your units are and what they’re doing is hindered. We did encounter a lot of difficulties on this fire…just in terms of radio communications or how are we going to manage the traffic? There were 27 dozers on scene at one point. How do we communicate with all the dozer operators? We’ve got to plan for these kinds of events, as something that becomes more normal.”

On June 28, Hawaii County was declared to be a natural disaster area due to drought by the U.S. Department of Agriculture, allowing farm operators in the county to be eligible for certain assistance from the Farm Service Agency.

According to the NOAA Climate Prediction Center, with the exception of the Kona slopes of the Big Island, leeward areas of the state are expected to have a continuation of drought conditions into mid-fall 2021 due to the probabilities favoring below normal rainfall. Windward areas may have sufficient rainfall to mitigate the development of significant drought conditions.