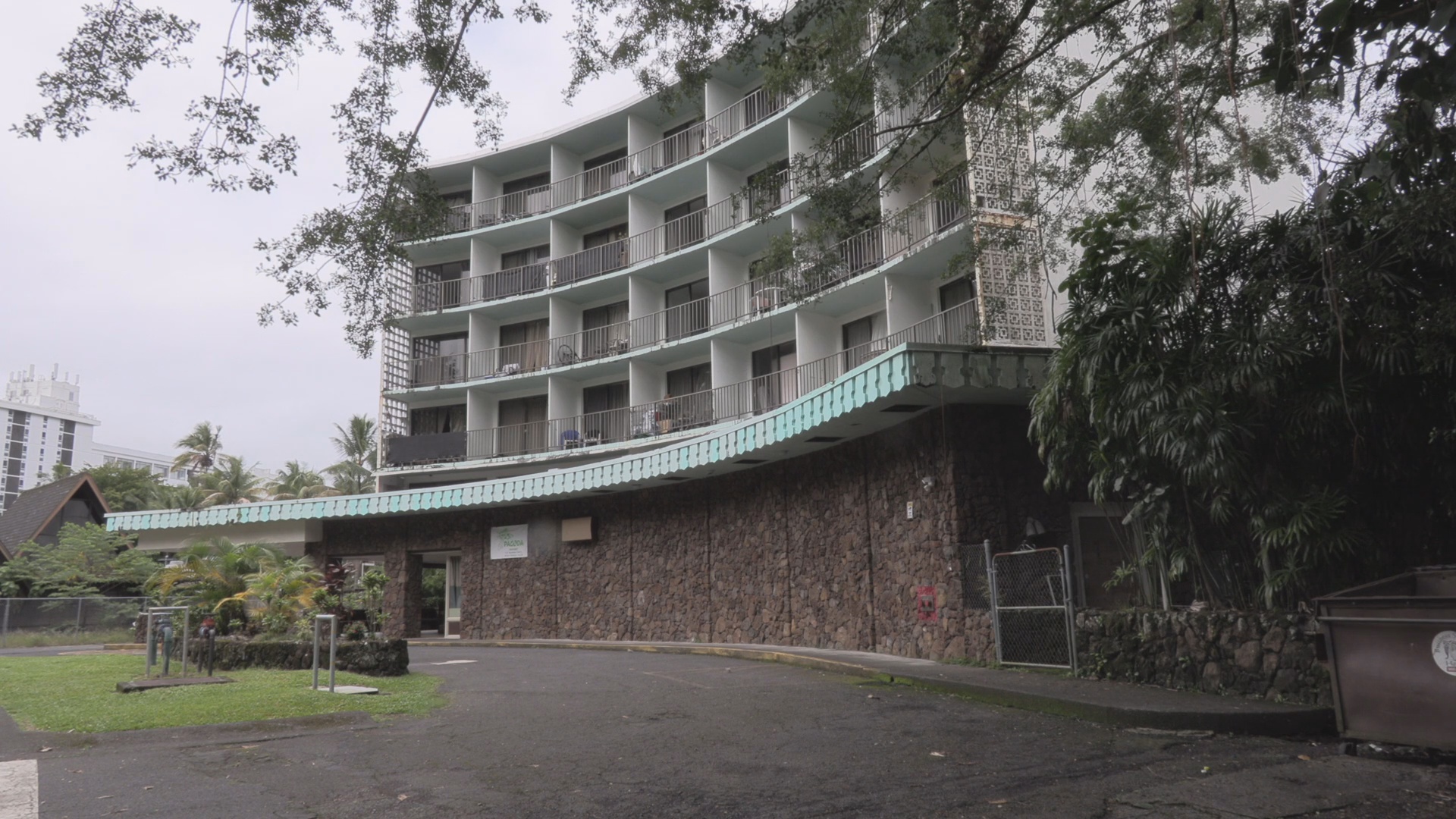 (BIVN) – Big changes could be coming to the Banyan Drive area of Hilo, where the Country Club Apartments and the former Uncle Billy’s will be replaced by new hotel accommodations, if the Hawaiʻi land board approves two proposals at a Friday meeting.

Tower Development Inc., an affiliate of WHR LLC which already holds the state lease for the Grand Naniloa Hotel, has been chosen by a committee as the recommended redeveloper of both Uncle Billy’s and the Country Club Apartments. The Grand Naniloa is located next door to both properties.

Last August, the State of Hawaiʻi published a Request for Qualifications / Request for Proposals for the redevelopment of the dilapidated properties. An evaluation committee was appointed to analyze and make a recommendation to the Board of Land and Natural Resources. Tower Development Inc emerged as the favorite for both projects.

The BLNR will decide on the recommendations at its September 24 meeting.

Land board documents show Tower Development is proposing to demolish one-third of the buildings on the Uncle Billy’s property, “specifically the building on the southwest portion of the property, and substantially renovate and repair the remaining structures,” in order to make way for a 100 to 125-room Hampton Inn & Suites by Hilton. The demolished buildings will be replaced with grass and park areas, the document says.

The new Hampton Inn will employ between 30 to 50 people. The total estimated project cost is $29 million. “In the first year of hotel operations, TDI projects about $4.5 million in total revenue, with revenues increasing each year thereafter,” the land board documents says. “TDI’s projected timeline for the project is three months for the negotiation of the development agreement, six months for lease approval, 18 months for design, Board approval, and permitting, and two years for construction. A 30-day employee training period would precede opening of the hotel for business.” 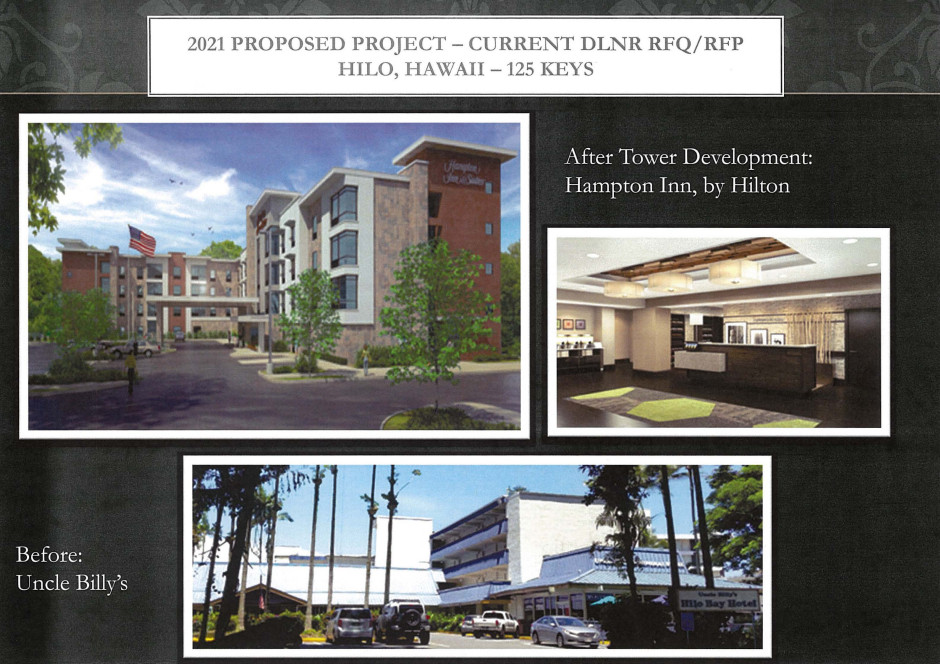 From slide presentation in BLNR document

The proposal may also result in the sublease of a portion of the Naniloa golf course for use as additional parking for the proposed Hampton Inn project.

“The renovated buildings will be put into operation for transient accommodations as a Home2 Suites or another limited service branded hotel by Hilton,” the documents states. Other documents show renderings for a proposed Hilton Embassy Suites on the property. Tower intends to employ about 50 employees in the new hotel operations. The proposed rent is $75,000 per year for the first 10 years and steps up 1.5% per year beginning in year 11. 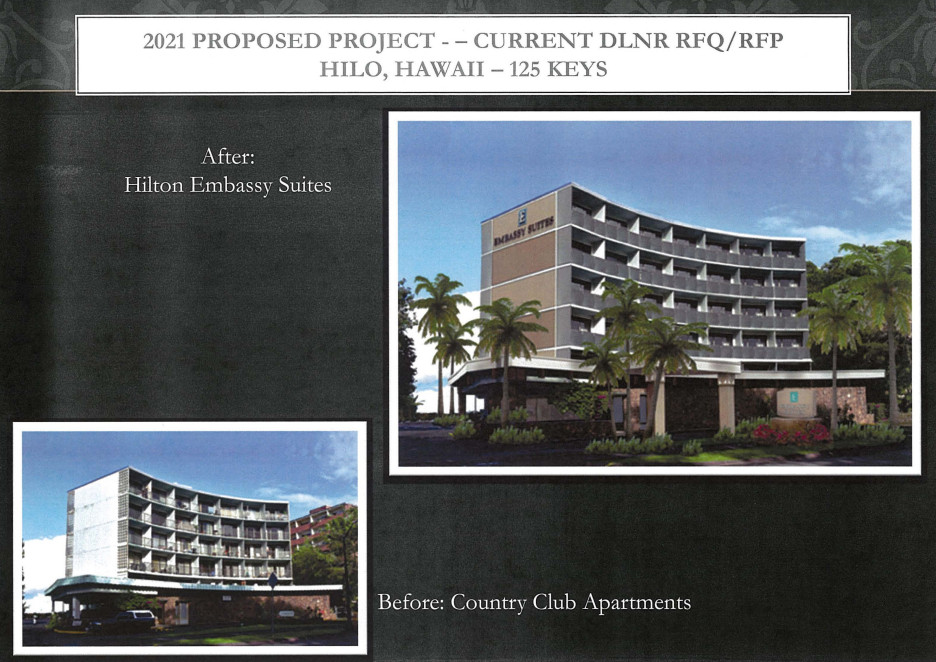 From slide presentation in BLNR document

Tower plans to use the same management company for the two renovated properties as WHR LLC uses for the Grand Naniloa Hotel.