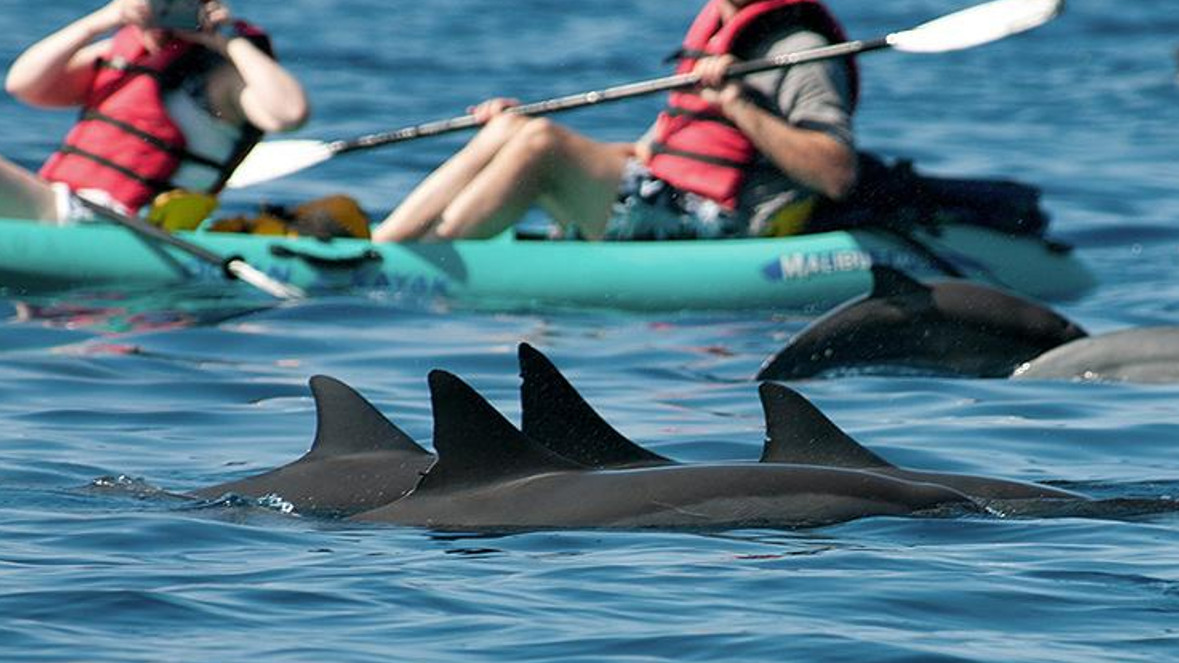 NOAA: "During their daily resting period, Hawaiian spinner dolphins are exposed to disturbance from people seeking close interactions. A new regulation prohibits swimming with, approaching, or remaining within 50 yards of a Hawaiian spinner dolphin, and a new rule has been proposed for time area closures in the dolphins’ essential daytime habitats. Shown here: Kayakers getting close to spinner dolphins." (Credit: Julian Tyne, via NOAA)

HAWAIʻI ISLAND - A final, federal rule prohibits people from coming to within 50 yards of spinner dolphins, while another proposed rule may establish time-area closures of select nearshore resting areas.

(BIVN) – After years of discussion, a new federal rule has been finalized that prohibits swimming with, approaching, or remaining within 50 yards of a Hawaiian spinner dolphin.

The new rule is final, says NOAA Fisheries, and will officially be in effect on October 28, 2021.

“The rule applies to any vessel, person, or object (including all boats, canoes, stand-up paddleboards, drones, or any other means) that is within 2 nautical miles from shore in the main Hawaiian Islands and in designated waters bounded by the islands of Lāna‘i, Maui, and Kahoʻolawe,” a NOAA news release states. “The rule also prohibits approach by ‘interception’ or placing a vessel, person, or other object in the path of a spinner dolphin so that the dolphin approaches within 50 yards of the vessel, person, or object.”

NOAA says there are eight exceptions to the prohibitions listed in this regulation:

NOAA Fisheries is also proposing to establish time-area closures to reduce the disturbance of nearshore areas that are designated as essential daytime habitats for spinner dolphins. Four of the five proposed areas are in Kona.

The proposed regulation will require public input before it can be finalized. The rules would prohibit entering restricted areas between 6 a.m. and 3 p.m. daily in parts of Kealakekua, Hōnaunau, Kauhakō (Ho‘okena), and Makako Bays on Hawai‘i Island. La Perouse Bay on Maui is also included.

“Spinner dolphins are nocturnal and hunt in offshore waters at night. During the day, they use areas close to shore that have optimal environmental conditions to socialize, nurture their young, shelter from predators, and rest in preparation for nightly hunting,” NOAA said. “These specific areas are considered spinner dolphin essential daytime habitats.”

There are six proposed exceptions to the spinner dolphin closure areas. NOAA says those exceptions are:

The public comment period for the proposed time-area closures will be open until December 27, 2021, 90 days after publication in the Federal Register.