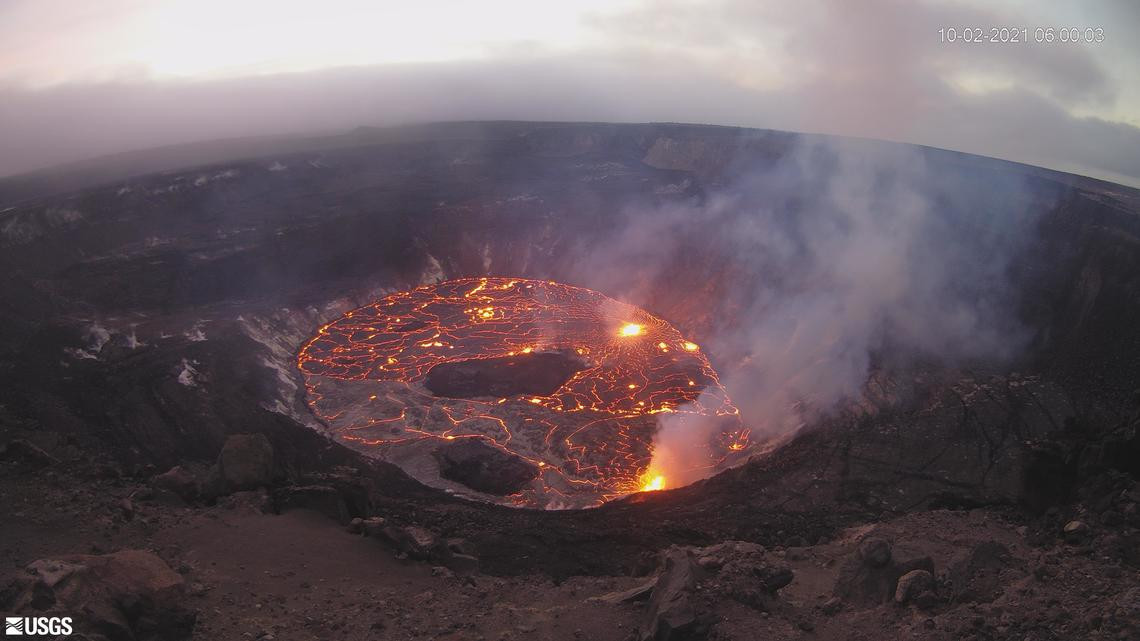 Photo of the continuing eruption and growing lava lake at Halemaʻumaʻu taken by USGS webcam on the morning of October 2, 2021. 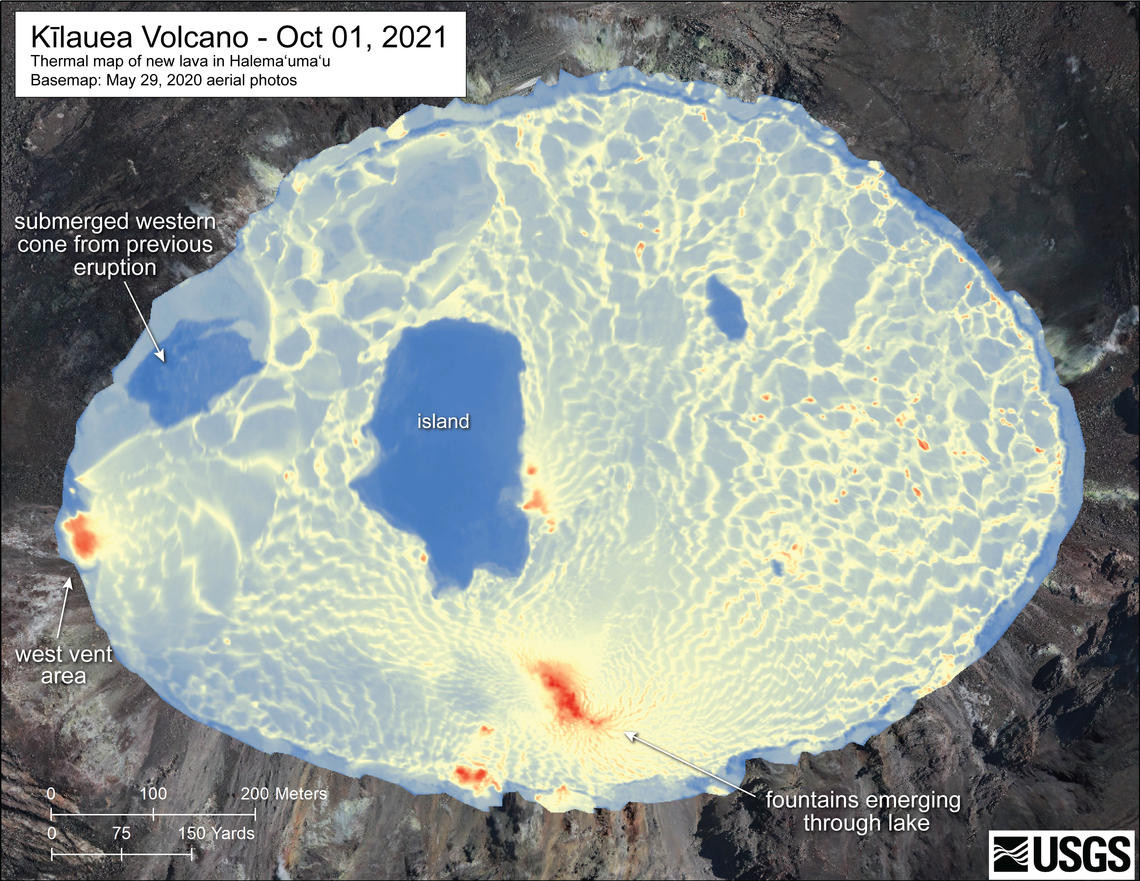 A helicopter overflight on October 1, 2021, at approximately 10 a.m. HST allowed for aerial visual and thermal imagery to be collected of Halema‘uma‘u crater at the summit of Kīlauea. The scale of the thermal map ranges from blue to red, with blue colors indicative of cooler temperatures and red colors indicative of warmer temperatures. The dimensions of the new lava lake are 1 km (1094 yd) E-W axis and 720 m (790 yd) in N-S axis. The estimated area of the lake is about 54 hectares (134 acres). USGS map by M. Patrick.

(BIVN) – The new eruption of Kīlauea volcano continues, with all activity confined to the summit crater. From the USGS Hawaiian Volcano Observatory on Saturday:

Activity Summary: Kīlauea volcano is erupting. Lava continues to erupt from multiple vents along the floor and western wall of Halemaʻumaʻu crater. As of this morning, October 2, 2021, all lava activity is confined within Halemaʻumaʻu in Hawai’i Volcanoes National Park. Seismicity and volcanic gas emission rates remain elevated.

Summit Observations: Sulfur dioxide (SO2) emission rates remain high and were estimated at around 12,900 tonnes per day on October 1, 2021. Seismicity is elevated but stable. Summit tiltmeters continued to record slowing deflationary tilt through the last 24 hours.

Halemaʻumaʻu Lava Lake Observations: Lava continues to erupt from multiple vents on the base and west wall of Halemaʻumaʻu. The rate of lava lake rise has slowed since the early phase of the eruption. Over the past 24 hours, it has risen over 2 meters (2.2 yds). In total, the lava lake surface has risen approximately 26 meters (28 yds) since the eruption started. Localized and discontinuous crustal foundering continues (a process by which cool lava crust on the surface of the lava lake is overridden by less-dense liquid from below causing the crust to sink into the underlying lake lava). Field crews this morning measured fountain heights of approximately 7 meters (7.7 yds) from the main vent and 1-2 meters (1.1-2.2 yds) from the southernmost vents. Occasional fountain height bursts have been observed over the past 24 hours, including a burst this morning with estimated heights of 50-60 meters (55-66 yds).

East Rift Zone Observations: No unusual activity has been noted in the Kīlauea East Rift Zone. Ground deformation motion suggests that the upper East Rift Zone—between the summit and Puʻuʻōʻo—has been steadily refilling with magma over the past year. SO2 and hydrogen sulfide (H2S) emissions from Puʻuʻōʻō.

Hazard Analysis: This new eruption at Kīlauea’s summit is occurring within a closed area of Hawai’i Volcanoes National Park. Therefore, high levels of volcanic gas are the primary hazard of concern, as this hazard can have far-reaching effects down-wind. Large amounts of volcanic gas—primarily water vapor (H2O), carbon dioxide (CO2), and sulfur dioxide (SO2)—are continuously released during eruptions of Kīlauea Volcano. As SO2 is released from the summit, it reacts in the atmosphere to create the visible haze known as vog (volcanic smog) that has been observed downwind of Kīlauea. Vog creates the potential for airborne health hazards to residents and visitors, damages agricultural crops and other plants, and affects livestock. For more information on gas hazards at the summit of Kīlauea, please see (this publication). Vog information can be found (here).

Other significant hazards also remain around Kīlauea caldera from Halemaʻumaʻu crater wall instability, ground cracking, and rockfalls that can be enhanced by earthquakes within the area closed to the public. This underscores the extremely hazardous nature of Kīlauea caldera rim surrounding Halemaʻumaʻu crater, an area that has been closed to the public since late 2007.

Hawaiian Volcano Observatory scientists say they will continue to closely monitor the eruption, and issue daily updates until further notice.