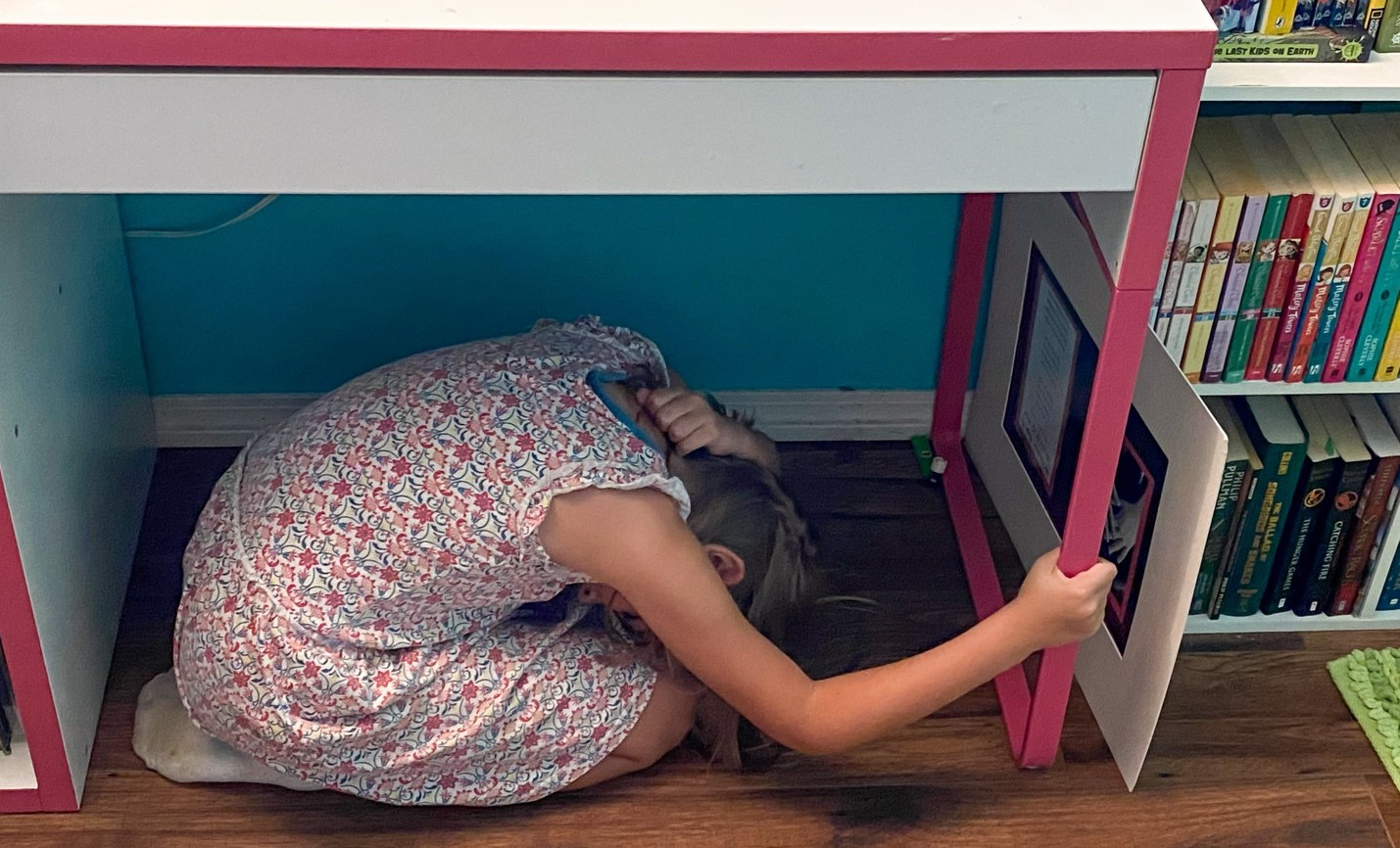 USGS: "It is important to be aware of your surroundings and have a plan in case of an emergency. “Drop, Cover, and Hold On” reduces the risk of personal injury during most earthquake situations. Drop to the ground to lessen the chances of falling over during intense ground shaking. Find cover under a sturdy shelter to protect yourself from falling objects. Hold on to your shelter to prevent it from shaking away during the earthquake." (USGS photo by N. Bennington.)

HAWAIʻI - The USGS Hawaiian Volcano Observatory is raising awareness about the annual International ShakeOut Day, which is held is the third Thursday of every October.

The magnitude-6.2 earthquake that occurred on Sunday, October 10 at 11:49 a.m. HST, originated just south of the Island of Hawai‘i. The large earthquake, caused by bending of the oceanic plate, serves as a stark reminder that the State of Hawaii is no stranger to potentially damaging earthquakes.

From Niʻihau to Kīlauea, all Hawaii residents live on landscapes shaped by volcanoes. Each Hawaiian volcano starts on the floor of the Pacific Ocean. Over time—and with countless eruptions—lava accumulates as the volcano grows above sea level, eventually creating the islands we now call home.

Beyond the inhabited islands are numerous other volcanic piles weighing down on the ocean bottom. To the southeast is Kamaʻehuakanaloa (formerly Lōʻihi Seamount), a young submarine volcano that has yet to come up for air. Stretching far to the northwest, beyond Niʻihau to Mokupāpapa (Kure Atoll), are mostly eroded volcanoes that make up the Papahānaumokuākea Marine National Monument.

To give a perspective of the immense mass sitting on the Pacific plate, the tallest of these volcanoes, Mauna Kea, is nearly a mile taller than Mount Everest from the base to the summit. The distance from Mokupāpapa to Kamaʻehuakanaloa, is about 2,500 km (1,600 miles). With the addition of the Emperor Seamounts, which stretch even farther to the northwest, that length increases to 6,200 km (3,900 miles). That is a lot of lava, stacked far and tall.

Although infrequent, the broad and rigid oceanic plate bends and buckles under the immense weight of these islands. Earthquakes of this type can be compared to the creaks you might hear when walking on an old wooden lanai. The floor is merely reacting to the load placed upon it.

These types of earthquakes are typically deep and do not generate tsunamis. The water column needs to be displaced by a fault breaching the seafloor, not just shaken by an earthquake, for a tsunami to occur.

Some of the impacts from earthquakes, like the recent magnitude-6.2, can be minimized when we prepare in advance.

There are countless small actions we can do, long before another earthquake strikes, to protect ourselves, our ‘ohana, and our property. Make a plan and build a supply kit that can be used in case of an emergency. Fastening heavy objects like a bookcase or television to the wall will lessen the chances of them tipping over. Having sturdy latches on cupboards will help stop dishes from flying across the kitchen. These are just a couple of the small things we can do to prepare. Check out shakeout.org/hawaii to find out what else can be done.

The USGS Hawaiian Volcano Observatory, along with thousands of residents across the State, participate yearly in The Great Hawaiʻi ShakeOut to raise awareness for earthquake preparedness.

International ShakeOut Day is the third Thursday of every October. The Thursday date also determines the time when we practice what to do during an earthquake. This year, on 10/21 at 10:21 a.m., we invite you to Drop, Cover, and Hold On with us.