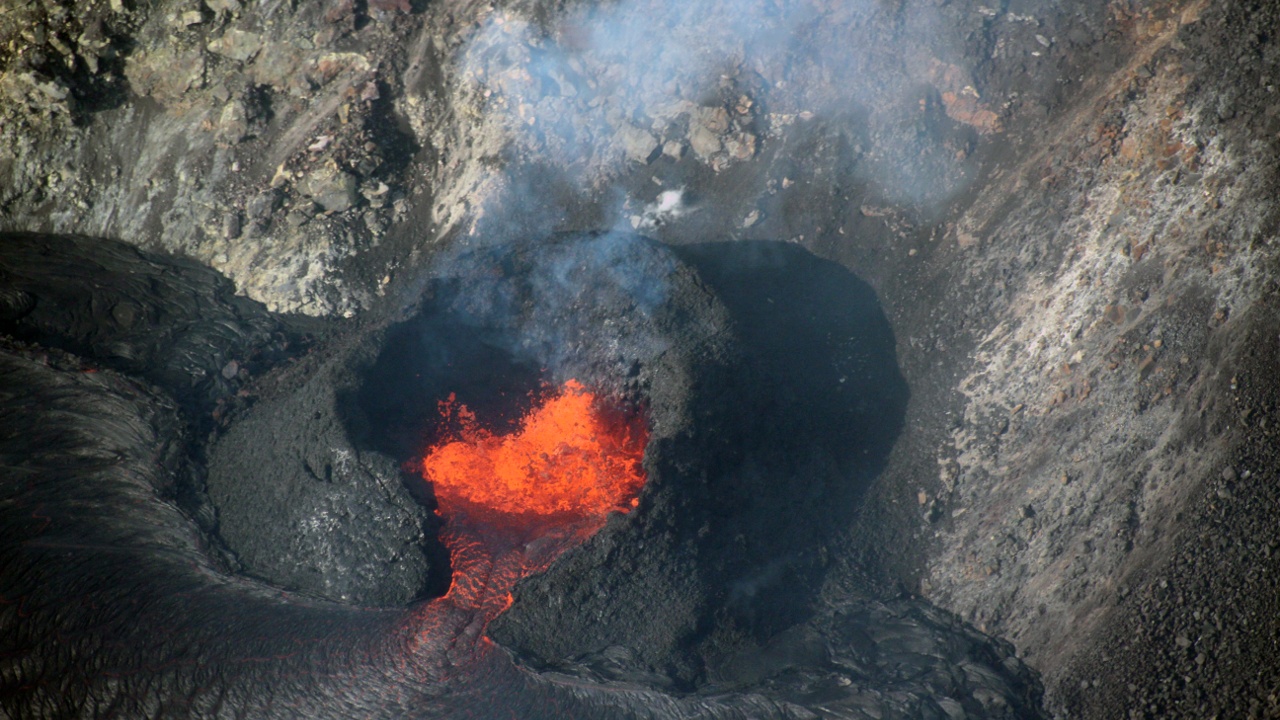 USGS: “A close-up view of the west vent on the western crater wall of Halema‘uma‘u, at Kīlauea summit. Fountaining and lava spatter has built a cone around the vent. Lava pools in the cone and then pours into the lava lake through a small spillway. This photo was taken during a monitoring helicopter overflight on October 15, 2021.” (USGS photo by N. Deligne)

(BIVN) – The eruption of Kilauea continues on Hawaiʻi island, and scientists have released some stunning new video of the volcanic activity.

This footage was recorded on October 12th. Its shows the lava erupting from the west vent at the summit crater.

The USGS Hawaiian Volcano Observatory reports the vent is surrounded by a spatter cone that is about 30 meters, or 100 feet high. It is supplying the summit lava lake through a short spillway. Consistent fountain heights of 10 to 15 meters, or 30 to 50 feet, were interrupted by larger bursts, exceeding the height of the spatter cone.

This short-lived north vent erupted for approximately 10 hours. It produced a smaller lava fountain, about 3 meters or 10 feet high, with spatter reaching a little higher.

Scientists also recorded this view from the air on October 15th. All lava activity is confined to the summit crater in Hawaii Volcanoes National Park, with no unusual activity observed in the Kīlauea East Rift Zone. They say seismicity and volcanic gas emission rates remain elevated. The most recent sulfur dioxide emission rate was measured at 2,700 tonnes per day. The total erupted volume since the beginning of the eruption was estimated on October 8th to be about 15.9 million cubic meters, 4.2 billion gallons. The lava lake level has increased by 45 meters, or 148 feet, since the current eruption began on September 29.

The Hawaiian Volcano Observatory will continue to closely monitor Kilauea Volcano, and will issue daily updates until further notice.