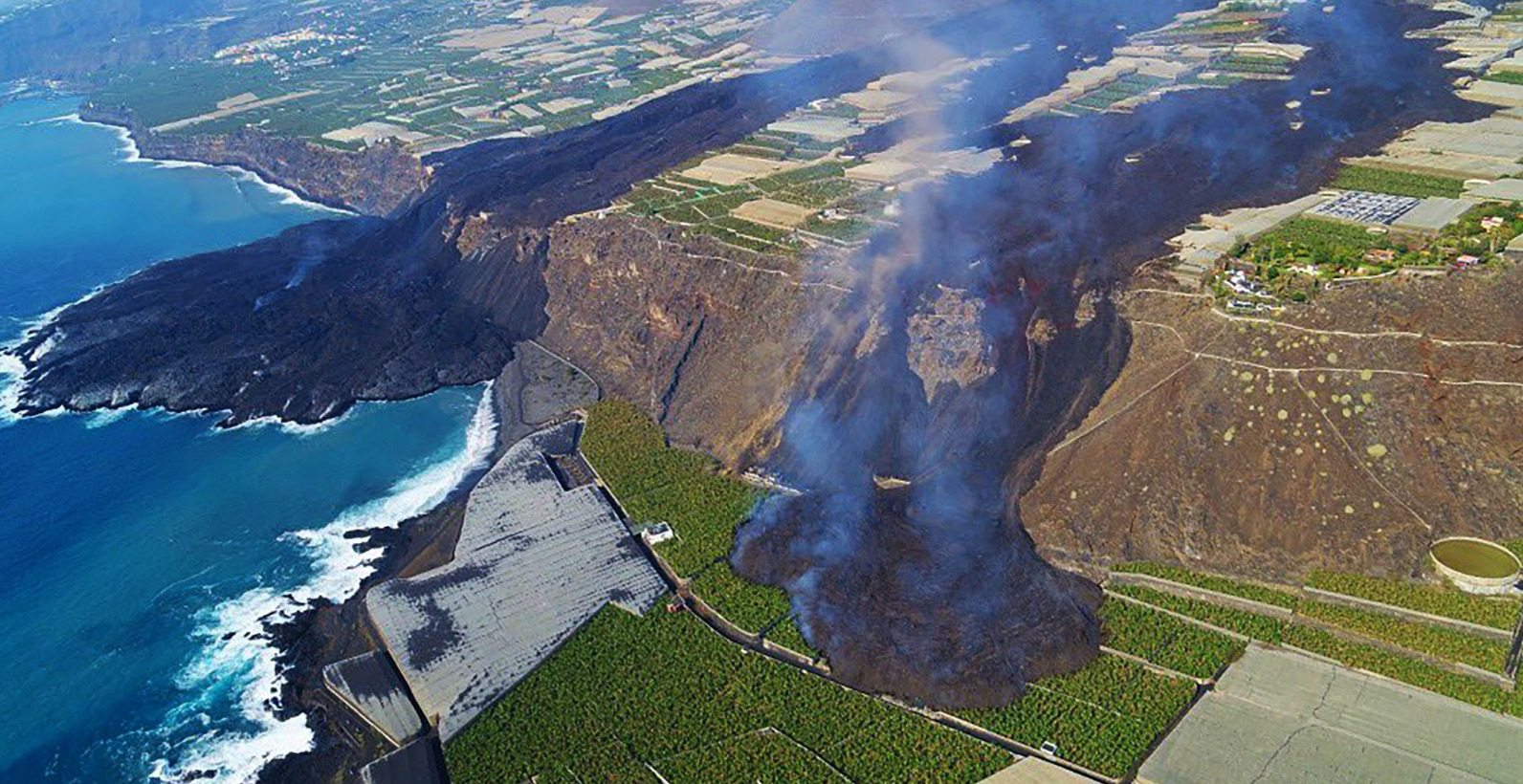 USGS: "La Palma is a basaltic shield volcano in the Canary Islands. Like Hawaiian volcanoes, La Palma typically erupts lava flows. This aerial photo, courtesy of Radio Televisión Canaria, shows lava flows that are being generated by a fissure eruption upslope on La Palma. One of the lava flows is entering the ocean, creating new land called a lava delta. Lava deltas are built by the accumulation of lava near the base of the sea cliff at an ocean entry."

(BIVN) – This week’s Volcano Watch article, written by U.S. Geological Survey Hawaiian Volcano Observatory scientists and affiliates, examined the current volcanic eruption on La Palma, and the often discussed scenario of a large tsunami being generated by a flank collapse.

The recent eruption on La Palma, in the Canary Islands, has stimulated speculation that the volcano might collapse, creating a tsunami that would devastate the east coast of North and South America. But is such a scenario possible or likely?

“Volcano Watchers” are probably aware that an eruption began on La Palma in the Canary Islands on September 19. The eruption style is similar to Hawaiian eruptions, and both locations share the potential for flank collapse and tsunami.

Basaltic ocean islands, such as the Island of Hawai‘i and the Canary Islands, tend to experience catastrophic landslides every few hundred thousand years—a discovery first made by USGS Hawaiian Volcano Observatory Scientist-in-Charge Jim Moore in the early 1960s! A significant portion of an island is removed during collapse and has the potential to displace tremendous amounts of seawater, generating local tsunami waves that are thought to be over 100 meters (300 feet) high. From this understanding grew a notion that collapsing volcanoes—particularly in the Canary Islands—could generate ocean-wide “mega-tsunami.”

In 2001, an academic paper suggested that collapse of La Palma could result in tsunami waves up to 25 m (about 80 feet) high along the east coasts of North and South America. This scenario made headlines in the media, which inaccurately depicted a huge wave devastating New York City.

But can collapses actually generate these “mega-tsunami” far from their sources? Subsequent research casts doubt on this idea.

The Canary Islands “mega-tsunami” scenario assumed a single, coherent, massive collapse block that reached a high velocity very quickly. Ocean floor mapping surrounding the Canary Islands, however, indicates that collapses instead occur in incremental or piecemeal fashion. In addition, geomorphologists found, via slope stability analysis, that the potential collapse volume is much smaller than was simulated by the 2001 paper.

Tsunami modeling has also advanced considerably since 2001. Studies of landslide-induced waves show that they travel at different speeds and interact more across long distances, leading to smaller wave height far from their sources. Better knowledge of ocean bathymetry, island and coastal topography, and the transfer of energy between slide blocks and water also contributed to more accurate modeling.

These new simulations suggest that the maximum wave height along the east coast of the Americas from a “worst-case scenario” collapse of La Palma would be on the order of 1-2 m (3-7 feet)—still hazardous, but similar to common storm surge.

A lack of geologic evidence also calls the “mega-tsunami” hypothesis into question. Tsunami leave characteristic sediment deposits on the coastlines they impact. But no such deposit has ever been identified on the east coasts of North and South America.

Collapses of Canary Island volcanoes are rare, occurring on timescales of hundreds of thousands of years, and should be preceded by signs of flank instability: increases in earthquakes and ground surface deformation. Canary Island volcanoes also erupt regularly—La Palma last erupted in 1971 and 1949—and slope stability analyses conducted at La Palma indicate that the structure is stable. The volcano would have to grow significantly before a collapse was likely.

This abundant evidence refutes the “mega-tsunami” hypothesis, demonstrating that it does not hold up to rigorous examination. However, tsunami that are generated by volcanoes are a real process and a significant threat. For example, the 1883 explosive eruption of Krakatau, in Indonesia, caused a local tsunami that killed tens of thousands on nearby coastlines. In 2018, a smaller eruption and collapse of Anak Krakatau, an island which grew in the 1883 caldera, also resulted in a local tsunami that killed hundreds.

Local tsunami can also be generated by other volcanic processes. On the Island of Hawai‘i, lava delta collapse at lava-ocean entries can cause small tsunami that impact areas adjacent to the delta. Slip on the fault underlying Kīlauea’s south flank, associated with M7–8 earthquakes, caused local tsunami in 1868 and 1975 that took lives. These are processes that have happened repeatedly in human history; they will happen again, and their associated hazards deserve our attention.

While the scientific view of the “mega-tsunami” hypothesis has evolved in the years since 2001, that original work led others to start investigations that contributed new knowledge that advanced our understanding of landslides and tsunami generated by volcanoes. In this way, the story is a marvelous example of exactly how science happens!