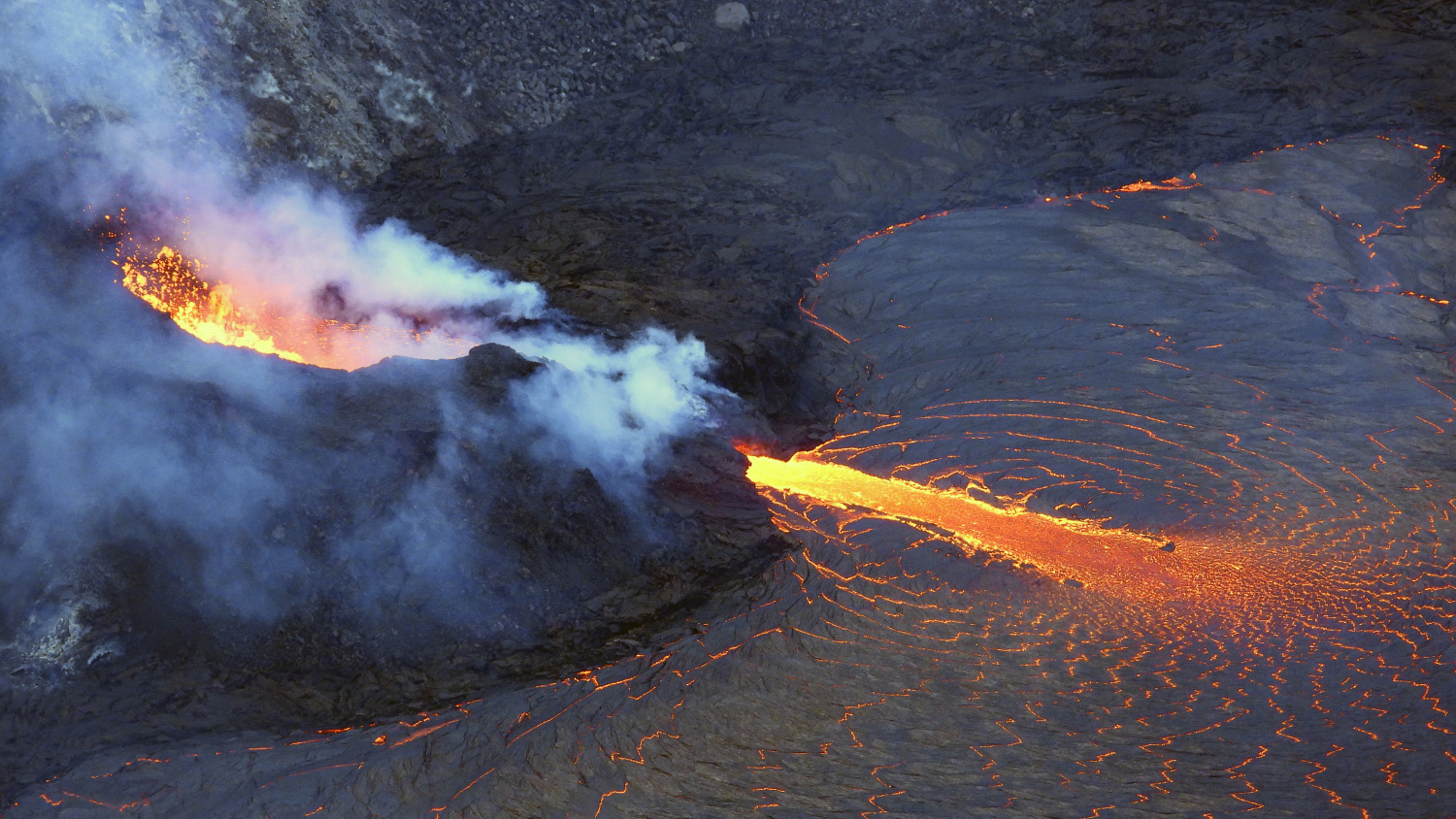 USGS: "A telephoto image of the west vent in Halema‘uma‘u crater at the summit of Kīlauea. Ponded lava within the spatter cone supplies lava into the lava lake through the tubed-over spillway. The fast-moving lava stream is incandescent as it enters into the lava lake at the base of the cone. As the lava slows and cools, a thin crust begins to form on the surface (center right). This photo was taken from the southern crater rim on November 3, in an area of Hawai‘i Volcanoes National Park that remains closed to the public due to hazardous conditions." (USGS photo by L. DeSmither) USGS: “The vent in the western wall of Halema‘uma‘u continues to erupt at the summit of Kīlauea. Volcanic gas emissions, primarily from the west vent (right), remain elevated. Sulfur dioxide (SO2) emission rates were measured at around 3,600 tonnes per day on October 28, 2021.” (USGS photo taken on November 3, 2021, by L. DeSmither.)

(BIVN) – The lava lake at the summit of Kīlauea volcano has reached a new milestone, as it slowly rises within Halemaʻumaʻu crater.

Scientists with the USGS Hawaiian Volcano Observatory recently noted that the eastern edge of the lake is now level with and has begun to advance onto the lowest of the down-dropped blocks remaining from the 2018 collapse event.

“It’s happened,” tweeted the USGS. “Lava has begun to creep out onto the down-dropped block in Halema‘uma‘u crater.”

“No new hazard,” the USGS added. “All lava activity remains confined within the crater in Hawai‘i Volcanoes National Park.” 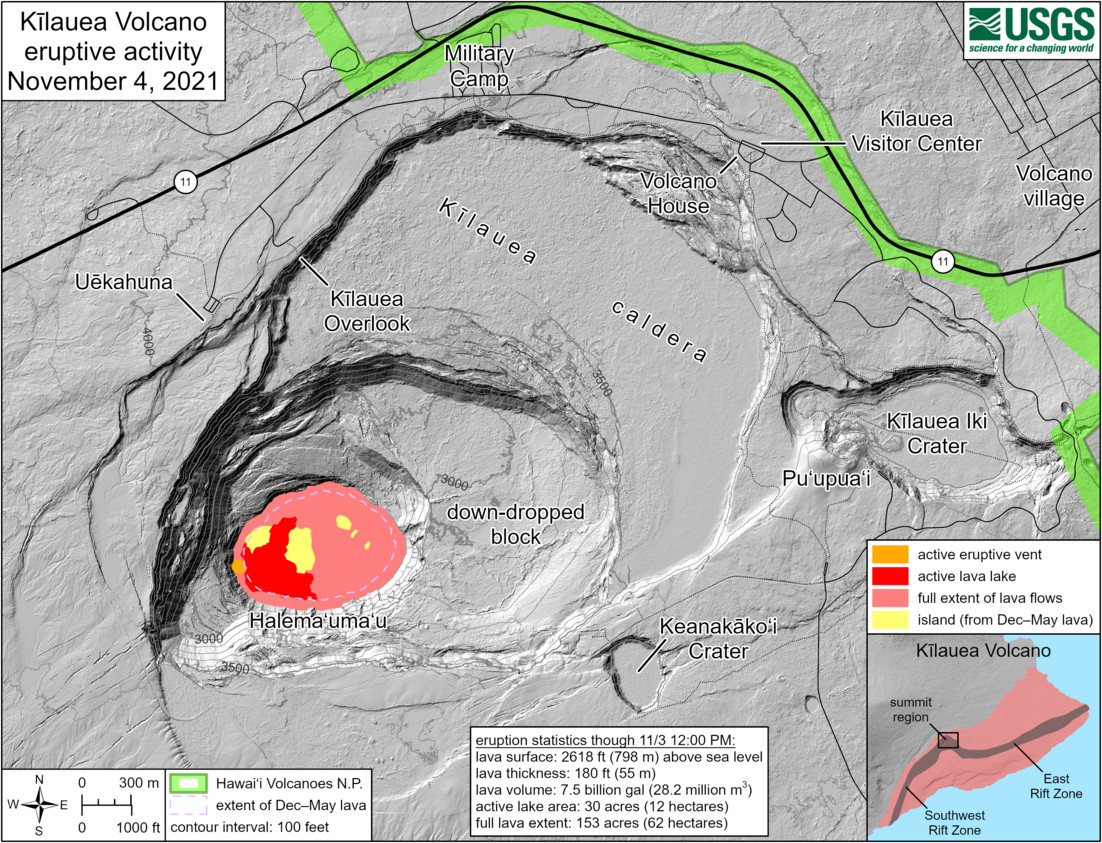 USGS: “This reference map depicts the ongoing Kīlauea summit eruption on November 4, 2021. One eruptive vent is active within Halema‘uma‘u at this time, along the western edge of the rising lava lake. Similar to the last eruption—from December 2020 until May 2021—the eastern end of the lava lake has stagnated and solidified, and sits several yards (meters) lower than the actively circulating western end. Still, lava ooze-outs from the northeast edge of the lake have started to lap onto the lowest remaining down-dropped block from the 2018 collapse event within the summit caldera. Note that this map depicts contour elevations in feet, with the surface of the active lava lake now at approximately 2,618 ft (798 m) above sea level. At this time, active lava is visible from two public visitor overlooks in Hawai‘i Volcanoes National Park: a site along the trail between Kīlauea Overlook and Uēkahuna can see the southeastern edge of the lava lake, and a section of the Keanakāko‘i Overlook can see the eruptive vent.”

From the USGS Hawaiian Volcano Observatory update on Saturday, November 6:

Summit Observations: Sulfur dioxide (SO2) emission rates remain high, with an emission rate for November 5, 2021, of approximately 2,900 tonnes per day. Summit tilt and GPS observations show no or minimal deformation over the past week. Earthquake activity remains below background and volcanic tremor remains elevated since the beginning of the eruption.

Halemaʻumaʻu Lava Lake Observations: Lava continues to erupt from a single vent in the western wall of Halemaʻumaʻu crater. The western end of the lake showed a maximum elevation of approximately 799 meters (2621 ft) above sea level by HVO’s permanent laser rangefinder on November 6, 2021, similar to the previous day, and a total increase of about 56 meters (184 ft) since lava emerged on September 29. The lava lake is not level across its surface due to the location of the vent on the western side. There is about 7 meters (23 feet) elevation difference between the active west and stagnant east part of the lake. The eastern edge of the lake is now level with and has begun to advance onto the lowest of the down-dropped blocks remaining from the 2018 collapse event. Field crews on November 5, 2021, observed roiling and low fountaining in the lava pond within the western vent. The total erupted volume since the beginning of the eruption was estimated to be about 28.2 million cubic meters (7.5 billion gallons) on November 3.

East Rift Zone Observations: No unusual activity has been noted in the Kīlauea East Rift Zone. Ground deformation measurements in the upper East Rift Zone area—between the summit and Puʻuʻōʻō—suggest that refilling of magma since late August 2021 has slowed or decreased slightly. SO2 and hydrogen sulfide (H2S) emissions from Puʻuʻōʻō were below instrumental detection levels when last measured on January 7, 2021.

Hazard Analysis: This new eruption at Kīlauea’s summit is occurring within a closed area of Hawai’i Volcanoes National Park. Therefore, high levels of volcanic gas are the primary hazard of concern, as this hazard can have far-reaching effects down-wind. Large amounts of volcanic gas—primarily water vapor (H2O), carbon dioxide (CO2), and sulfur dioxide (SO2)—are continuously released during eruptions of Kīlauea Volcano. As SO2 is released from the summit, it reacts in the atmosphere to create the visible haze known as vog (volcanic smog) that has been observed downwind of Kīlauea. Vog creates the potential for airborne health hazards to residents and visitors, damages agricultural crops and other plants, and affects livestock.

On Twitter, the USGS stated that if the current activity persist, it will still take years for the 2018 collapse to fill with lava.