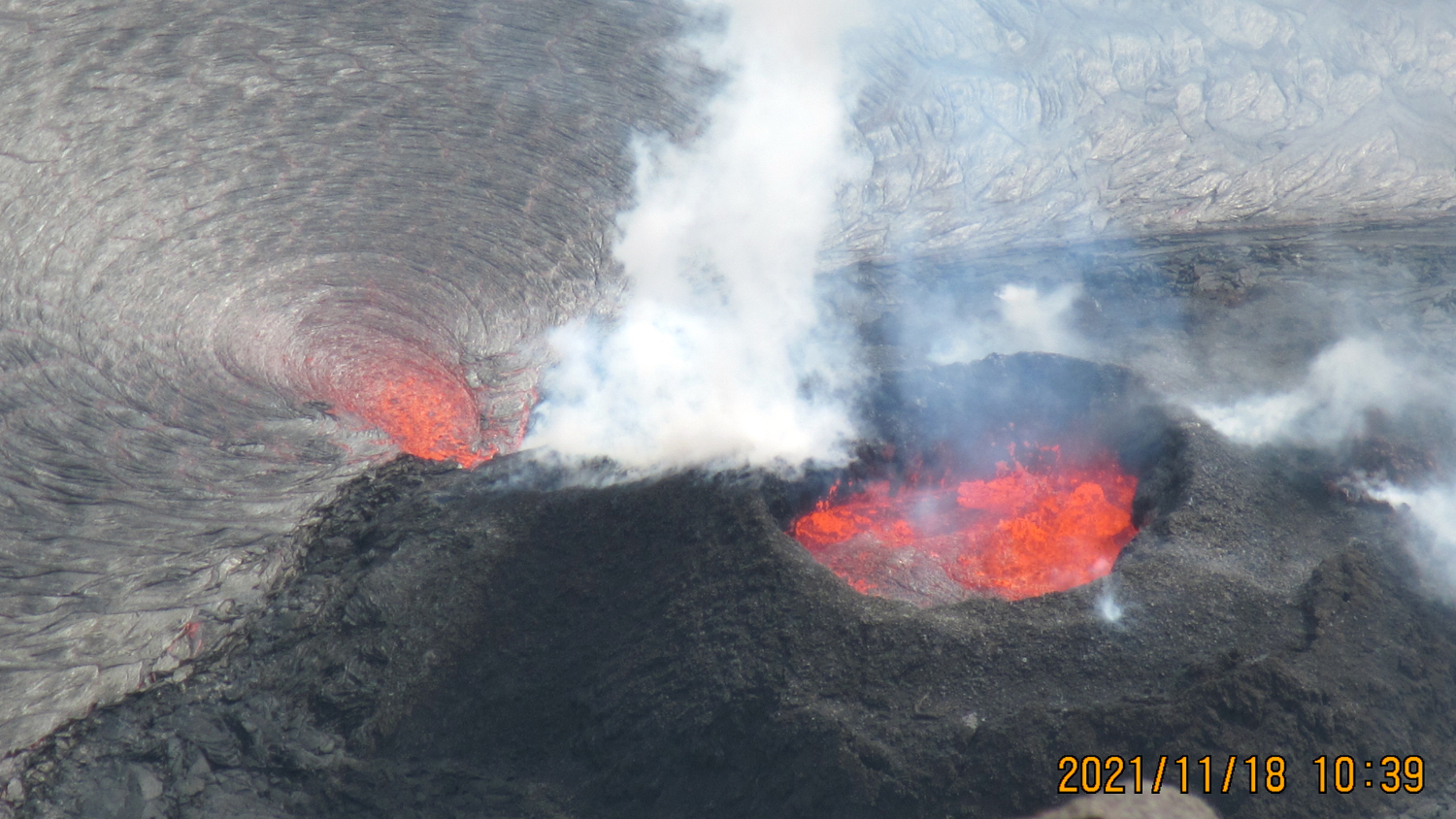 USGS: "A telephoto photograph of the roiling 4-7 meter (13-23 ft) lava fountains of the western vent in Halema‘uma‘u crater at the summit of Kīlauea. The spatter cone is nearly circular, with only one outlet letting lava cascade east into the lake. Concentric lava crust rings form around where lava enters the lake from a single source with persistent flux." (USGS image by C. Parcheta)

HAWAIʻI VOLCANOES NATIONAL PARK - Some lava "ooze-outs" have been observed on the lowest downdropped block at the perimeter of the Halemaʻumaʻu lava lake. 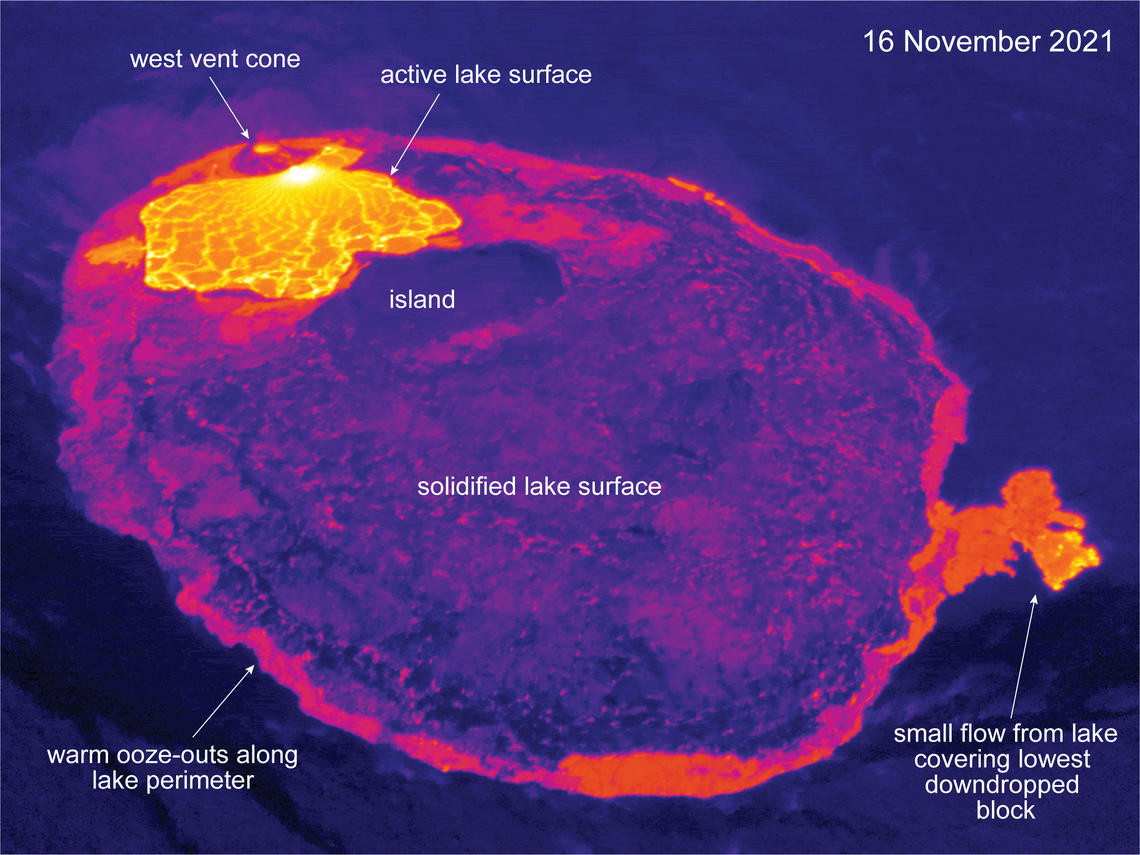 USGS: “This thermal image is looking west and shows the lava lake in Halema‘uma‘u, at the summit of Kīlauea. The active lava on the surface is limited to the west side of the lake, near the west vent. The eastern portion is solidified at the surface, with small ooze-outs often active along the lake perimeter. One of these ooze-outs has recently flowed a short distance onto the lowest downdropped block.” (USGS image by M. Patrick)

(BIVN) – The eruption of Kilauea volcano continues on Hawaiʻi island, with all activity confined to the summit within Halemaʻumaʻu crater at Hawaiʻi Volcanoes National Park.

There has been little change in activity in recent days. Scientists have been making note of small “ooze-outs” along the lava lake perimeter, including one that produced a lava flow a short distance onto the lowest downdropped block. 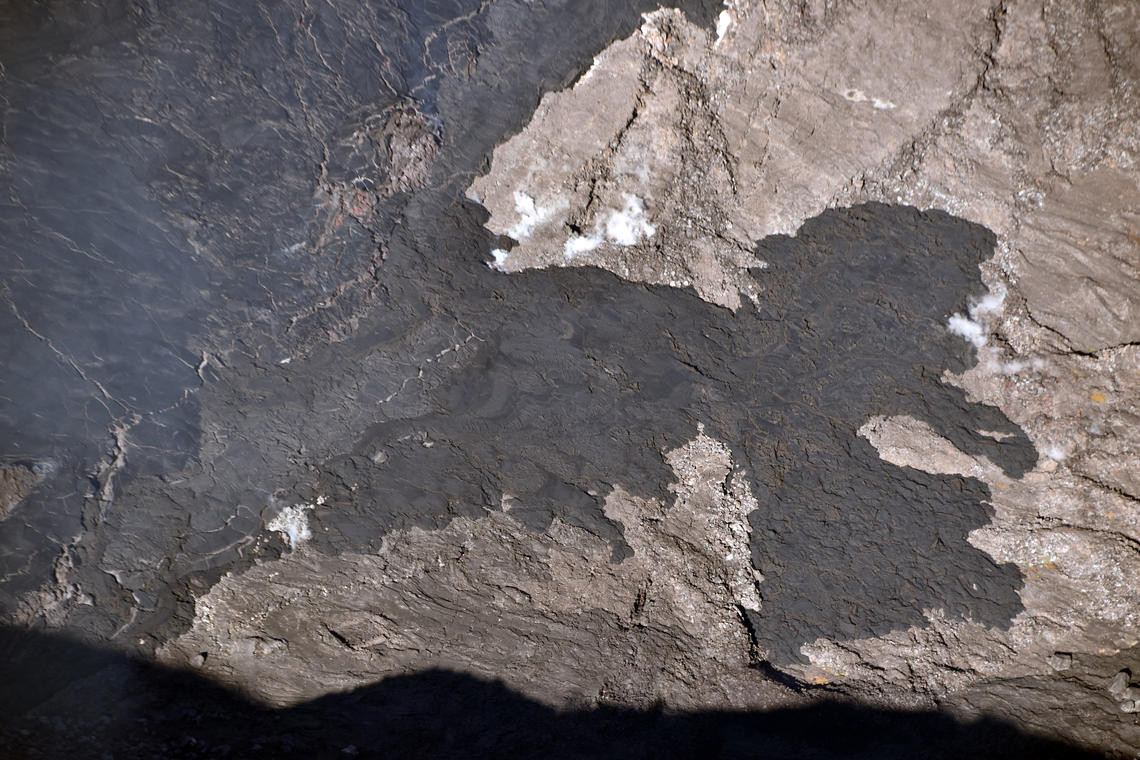 USGS: “The elevation of the surface of the lava lake within Halema‘uma‘u crater has now risen slightly above the level of the lowest down-dropped block from the 2018 collapse of Kīlauea summit. Overnight on November 15, 2021, a lava break-out from the edge of the lake allowed lava to flow onto the surface on the block. HVO geologists observed this new flow during a helicopter overflight of the Kīlauea summit on November 16.” (USGS image by B. Carr)

From the USGS Hawaiian Volcano Observatory on Friday, November 19:

Summit Observations: Sulfur dioxide (SO2) emission rates remain elevated, with an emission rate for November 18, 2021, of approximately 3800 tonnes per day. Summit tiltmeters overall recorded generally neutral tilt over the past day. Seismicity remains stable. Earthquake activity remains below background and volcanic tremor remains elevated since the beginning of the eruption.

Halemaʻumaʻu Lava Lake Observations: Lava continues to erupt from a single vent in the western wall of Halemaʻumaʻu crater, while the eastern edge of the lake continues to advance onto the lowest of the exposed down-dropped caldera floor blocks. The western end of the lake showed a maximum elevation of approximately 804 meters (2638 ft) above sea level by HVO’s permanent laser rangefinder this morning, and a total increase of about 60 meters (197 ft) since lava emerged on September 29. Webcams show spatter and ponded lava within the west vent, an area of active lava at the surface of the lava lake, and sporadic oozes of lava along the cooler outer lake margins. The total erupted volume since the beginning of the eruption was estimated to be about 30 million cubic meters (7.8 billion gallons) on November 16. 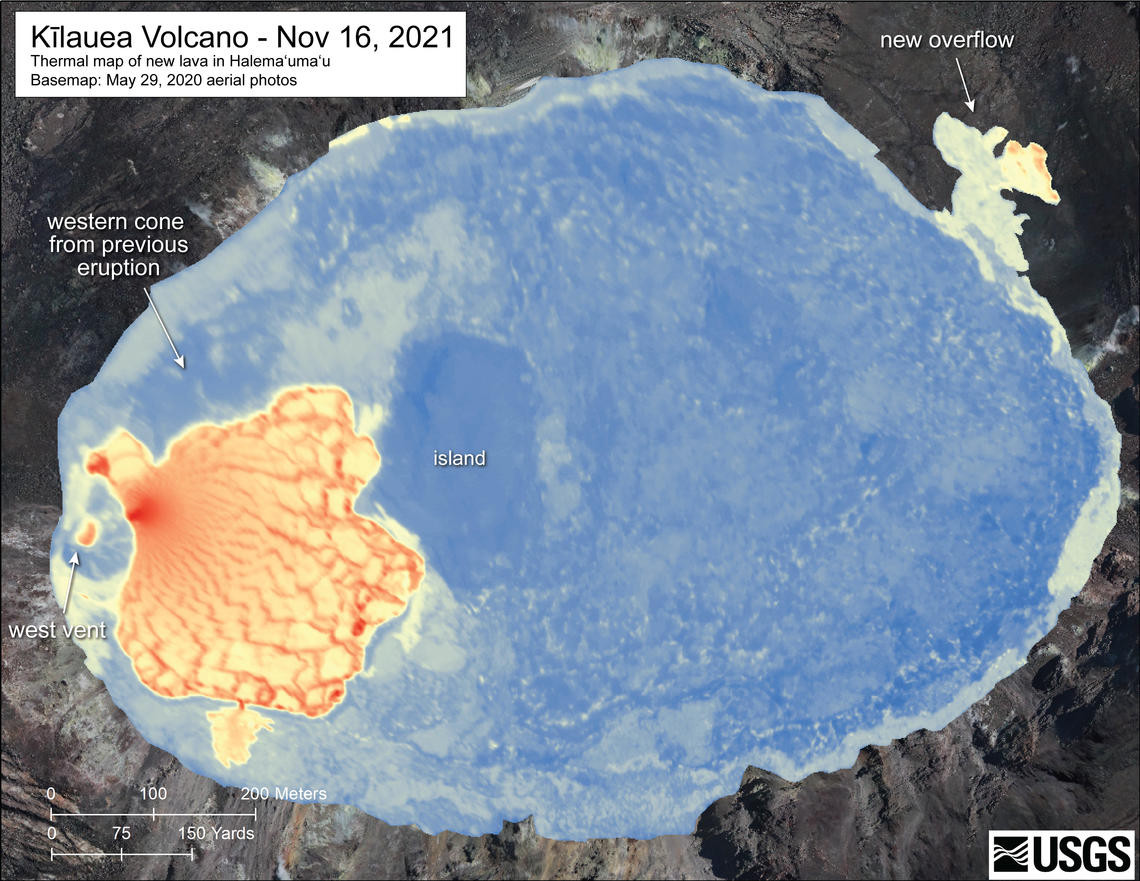 USGS: “A helicopter overflight on November 16, 2021, at approximately 8:30 a.m. HST allowed for aerial visual and thermal imagery to be collected of Halema‘uma‘u crater at the summit of Kīlauea. The scale of the thermal map ranges from blue to red, with blue colors indicative of cooler temperatures and red colors indicative of warmer temperatures. Within the western vent cone, a small crater hosts a small sloshing/spattering lava pond that is visibly warmer in the map. The active lava lake area, in the west portion of Halema‘uma‘u, is about 300 m (almost one thousand ft) wide in the north-south and east-west directions. The eastern portion of the lava lake is solidified at the surface, though webcam imagery shows that this portion of the lake continues to rise in a piston-like manner, with occasional “ooze-outs” extruding along the perimeter of the lake as the cooled surface rises. The new lava flow on the down-dropped block north and east of Halema‘uma‘u, which is visibly warmer in the map, was sourced from these ‘ooze-outs’.”

The USGS HVO continues to note that no unusual activity has been observed in the Kīlauea East Rift Zone.