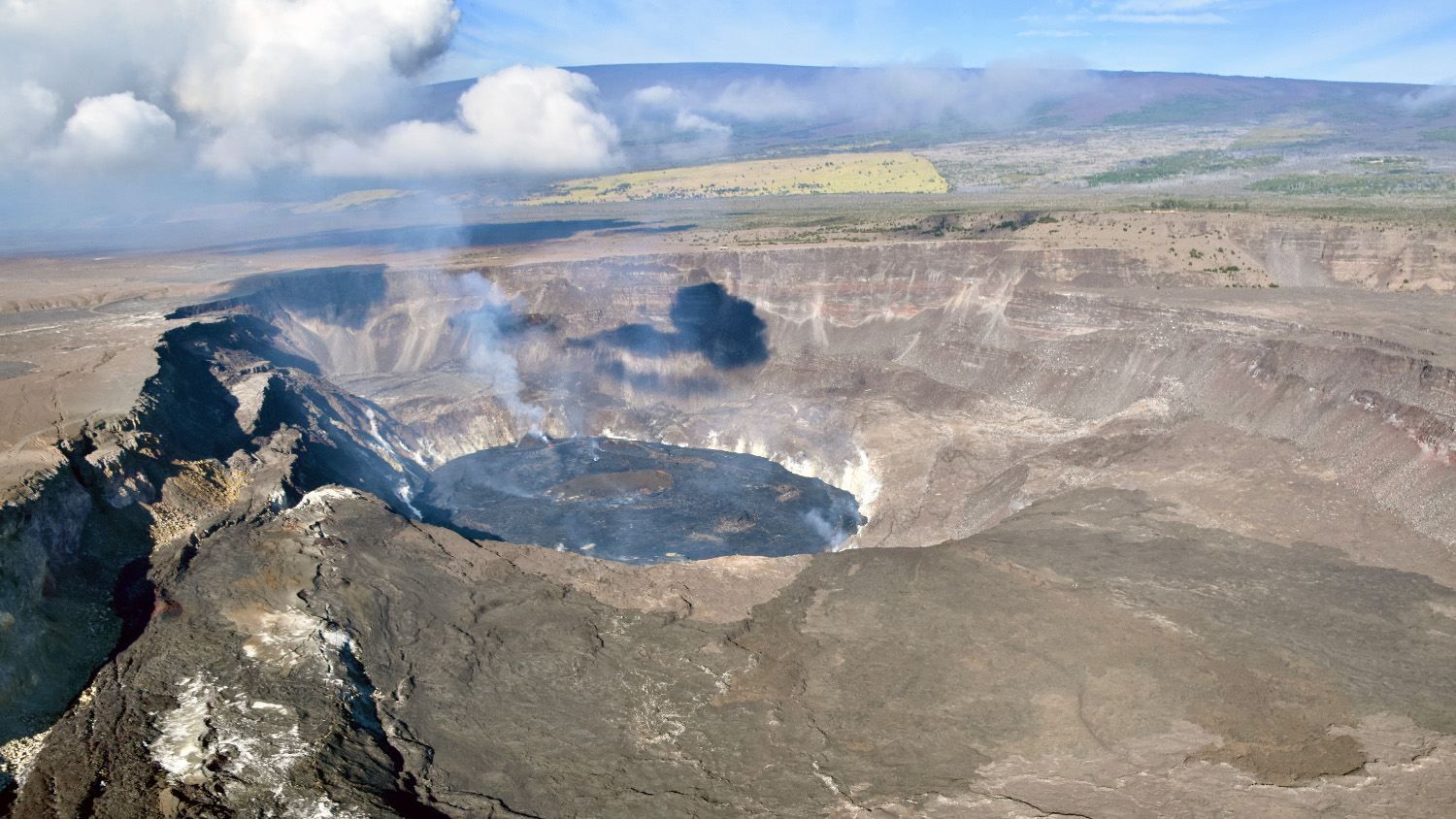 USGS: "An aerial view of the active lava lake within Halema‘uma‘u, at the summit of Kīlauea. A gas plume can be seen rising from the west vent along the crater wall (center left). The southeast flank of Mauna Loa is visible in the background." (USGS photo taken by B. Carr on November 9, 2021)

HAWAIʻI ISLAND - For three decades, the weekly update that began as a newspaper column in 1991 continues to provide volcanic insights. 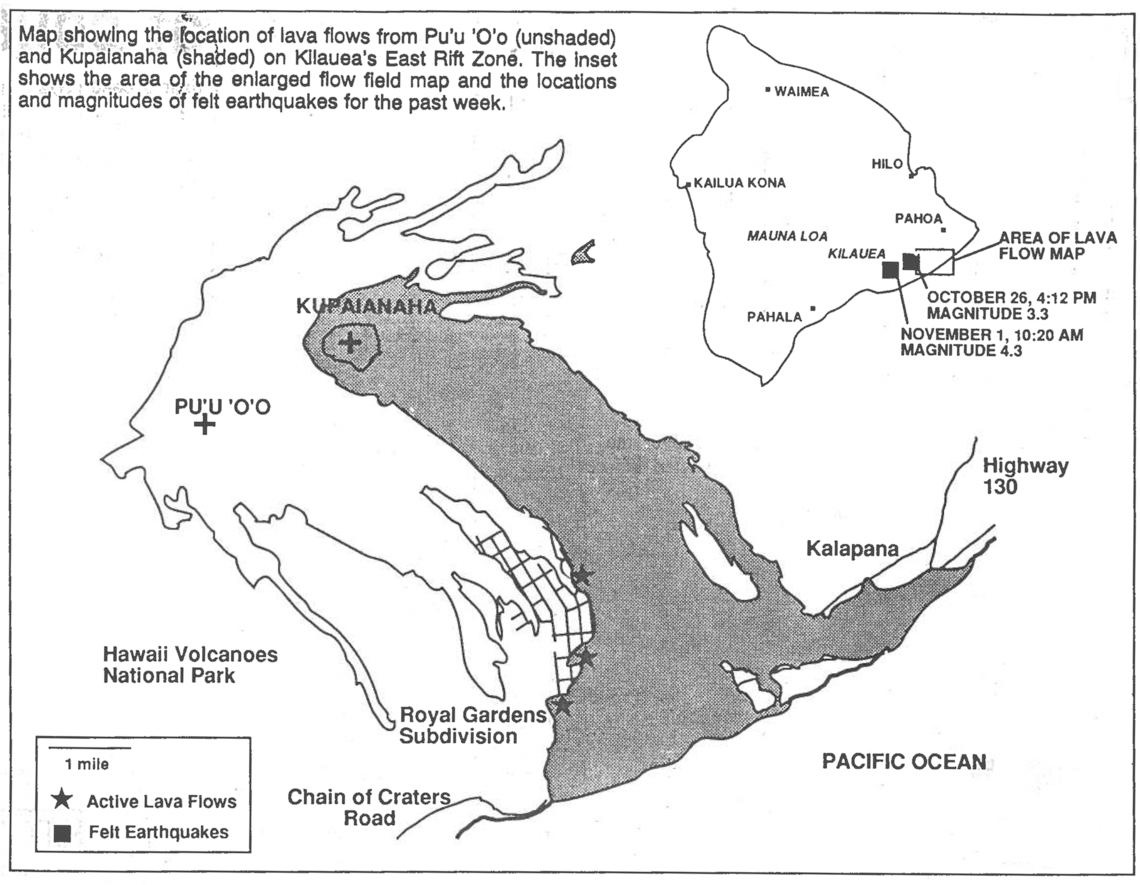 USGS: “A USGS map from the first “Volcano Watch” article published on November 3, 1991. The inset shows the Pu‘u‘ō‘ō and Kupaianaha lava flow field in the middle East Rift Zone of Kīlauea, while the smaller map of the Island of Hawai‘i (upper right) marks the felt earthquakes for the past week and the inset location.”

(BIVN) – As the eruption continues at the summit Kilauea, scientists with the USGS Hawaiian Volcano Observatory reflects on its relationship with the news media, as the weekly Volcano Watch article reaches the 30-year mark.

From the HVO scientists and affiliates:

It’s hard to believe that the “Volcano Watch” weekly article and volcano activity update started 30 years ago. On November 3, 1991, the USGS Hawaiian Volcano Observatory (HVO) “Volcano Watch” had its debut in the Hawaii Tribune-Herald, beginning a long and fruitful partnership.

David Clague, former HVO Scientist-In-Charge, initiated this series of weekly articles in late-1991. He was the primary author until March 1995, when the HVO staff – and eventually other partners – began contributing.

Clague recently commented, “I did not think I would be starting a weekly newspaper column that would continue for 30 years. [Volcano Watch] has exceeded my expectations in longevity and has served Hawaii well by teaching the populace about how Hawaiian volcanoes work, but more importantly, about how science and the scientists who do it constantly incorporates new observations and ideas to improve understanding.”

The “Volcano Watch” started as a weekly eruption and earthquake update to inform the public about the activity taking place at Pu‘u‘ō‘ō and Kupaianaha, which were erupting in the middle East Rift Zone of Kīlauea. These updates provided the public with current information that didn’t warrant a Press Release. Occasionally, they included lava flow field area or earthquake location maps. Short articles addressing volcano-related topics of interest to the community were added before the “Volcano Activity Update” section in 1992, the forerunner of our present-day format.

Over the past 30 years, many subjects have been highlighted in these articles ranging from volcanic activity and processes, earthquakes, monitoring techniques, HVO staffing updates, and much more. Topics are typically focused on Hawaiian activity, but also include interesting observations about global volcanism and seismicity, news from other USGS volcano observatories, and some additional special topics.

Thirty years’ worth of articles have formed a treasure trove of information that can be used as a reference for almost any volcano-related questions you have. In addition to the articles being printed in the Hawaii Tribune-Herald, the full “Volcano Watch” archive of more than 1,500 articles is available on the HVO website.

HVO staff have written most of the articles, but there have also been numerous contributions from volunteers, other Volcano Science Center staff, university partners and affiliates, and the USGS Pacific Island Ecosystems Research Center (PIERC).

The effort put into the “Volcano Watch” has not gone unnoticed. In November 2000, the “Volcano Watch” received a Customer Service Excellence Award from the U.S. Geological Survey for communicating science to a diverse audience. The National Association of Government Communications awarded the HVO “Volcano Watch” column First Place in the Electronic Publication category during the annual Blue Pencil and Gold Screen award program on June 26, 2019.

Since the founding of HVO in 1912, a large part of our mission has been to communicate science, volcanic activity and earthquake updates, and hazards to the public, emergency managers, and other scientists. HVO has published many different informational products over the years to keep the public informed, but the “Volcano Watch” remains one of the longest-running and timely series.

“The Volcano Letter” was a collection of short scientific articles along with volcano activity and earthquake updates started by Thomas Jaggar and published monthly from 1925 to 1955. After this publication was terminated in 1955, HVO no longer had regularly scheduled, publicly available volcano updates. A few short-lived products, similar to “Volcano Watch” were written by HVO, news outlets, and other scientists, however none lasted for more than a few years.

The most notable of these short-term publications, titled “Volcano Watching,” was written weekly by Bob and Barbara Decker, while Bob was a geology professor at Dartmouth. These ran in the Hawaii Tribune-Herald from July 1978 to February 1979, but stopped when Bob became Scientist-in-Charge at HVO.

When David Clague restarted the “Volcano Watch” in 1991, it filled a void in HVO’s public communications. Before the USGS began releasing volcano updates through the Volcano Notification Service (VNS) in 2006, the “Volcano Watch” updates kept residents apprised of weekly changes that were not substantial enough to issue a Press Release.

“Volcano Watch” articles continue to be an important and timely means of distributing information to both local and global audiences. HVO’s founder, Thomas A. Jaggar, believed – as we do now – that effective communication of volcanic hazards and eruption information, especially to the residents of Hawaii, is crucial.